By some unexpected twist, the early-announced Shin Megami Tensei: Devil Survivor game for the 3DS turned out to be an enhanced port of the original DS title rather than a sequel. Indeed, the actual sequel will instead be on the older handheld. Regardless, what is probably most prominent in minds of the original game’s fans is if they should play Shin Megami Tensei: Devil Survivor Overclocked. While the game alone may not be reason enough to buy a 3DS, several new features and enhancements make it worth playing again, especially if one hasn’t seen all of the endings.

For those new to the game, the story of Devil Survivor starts off with the nameable protagonist and two of his friends receiving special video game systems from his cousin called COMPs, which convieniently resemble the 3DS. His friend Atsuro soon unlocks a program that can summon demmons. Shortly thereafter, many other demons begin to appear in Tokyo and an explosion rocks the area. The Yamanote circle area of Tokyo is quickly placed under lockdown by the government, likely due to these otherworldly beings’ invasion. The COMPs also grant the main character the ability to see numbers above the heads of others, which indicate how many days they have left to live. No one in the area of the lockdown has more than seven days.

As in the original, the story is the main focus of the game, and it is appropriately well done. The main plot is very engrossing, and players will want to learn what happens next. The sense of urgency is especially apparent and well used. Not only is there the apparent seven-day time limit, the party characters will always be in danger from one thing or another, warned ahead of time by an email that can predict the future. This tension even afflicts NPCs, as the people within its effect become desperate to escape the lockout and start turning on each other. Many of these individuals also have their own demon-summoning COMPs, which understandably terrifies the ones who do not. The overall strength of the plot coupled with Atlus USA’s excellent localization makes up for any disjointed disruptions from the story being divided into 30 in-game minute non-linear sections. It is difficult to talk about the Eighth Day, one of Overclocked‘s new features, without engaging in massive spoilers, but in the route taken for this review it felt like a natural extension of the story. It should be noted, though, that not every story route has its own accompanying Eighth Day. 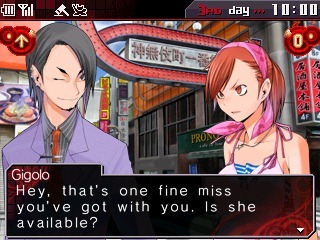 Gigolo’s VA should be familar to fans of short alchemists and womanizing AS pilots.

Another strong aspect of the story is its multiple paths, which lead to five distinct endings. While it may be somewhat difficult to obtain certain paths without a guide, by saving people and making choices, players can eventually choose from at least a few of the possible endings. These multiple routes through the game also allow learning more about the protagonists and NPCs, who can come across as shallow otherwise. This gives Devil Survivor Overclocked a great deal of replay value. However, the New Game + function has changed, and not for the better. Overclocked‘s reliance on using points earned through various tasks to select bonuses pales next to the original game’s automatic awarding of benefits when using New Game +. Only having enough points to transfer a few of one’s well-trained demons can be frustrating.

Devil Survivor’s battle system is a fascinating hybrid of strategy and traditional first-person, turn-based combat. In each bout, up to four player characters can be brought, accompanied by two demons either purchased through the Devil Auction or the result of fusing their brethren. Units are moved about on the battlefield, engaging in fights with demons and human opponents. Once the battle begins, players then choose which attacks to use on the opponent team. While fights can be won by defeating the team leader, the demon or human in the center, more experience points and Macca (money) can be earned by defeating all three opponents on a team. By hitting an enemy’s weakness or getting a critical hit, the combatants can earn extra turns or remove extra turns from opponents. The side starting the fight also receives extra turns and is given a boost in agility.

Boss battles can pose a greater challenge than expected, particularly those on certain routes. While it is always possible to grind for levels, as there is at least one option to engage in a free battle, an experience point cap will eventually slow level gains down. The use of strategy, especially by exploiting weaknesses, is essential to winning these more difficult bouts. Having a good strategy, paired with appropriate demons, will make fights more fun than frustrating. A more common frustration stems from battles in which NPCs must be protected, as enemies unerringly target civillians whenever possible. Overclocked comes with an easy mode, but this doesn’t necessarily make the battles less difficult, since its main effect is to remove the experience cap for easier level gains.

In regards to skills, Devil Survivor makes great use of character/demon customization through skill cracking, Skill Set Bonuses and fusions. The human characters can learn new skills by going into the Skill Crack menu during battle preparation and deciding which skills to learn by defeating a particular opponent, assuming the required minimum statistics are met. No two player characters can know the same skill, but skills can be moved from one character to another once they are cracked. This versatility, coupled with matching the characters’ natural strengths is a great benefit to battles. Demons are less customizable, but with a little extra time and patience, producing the right one for the job is very doable. During battles, demons may be taught any Command skill previously cracked by a human character if enough magnetite is earned. Since the magnetite meter is invisible, it is very difficult to tell when a new skill can be taught. As for the series’ standard of fusion, it is possible both to see what the result of a demon combination will be, and to research which ones are needed for the desired result. Since the skills that will be passed onto the new demon can be chosen freely, this allows for chain-fusion to get the desired skill on a certain demon. Overclocked also includes a Compendium, like other Megami Tensei titles, in which demons can be registered and re-summoned for a high price. 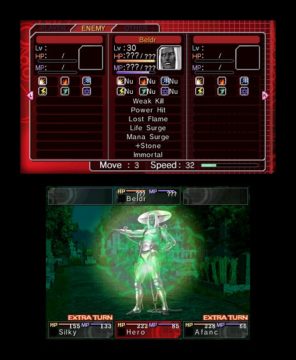 Immortal or not, his head makes him hard to take seriously.

The graphics are noticeably sharper in comparison the original DS version, such as the character portraits and sprites. In this early stage of the 3DS’s life-cycle, it’s difficult to say how they stack up to its potential, but they are at least pleasant to look at. The sprites are very versatile, with expressive movements to make up paucity of scenes telling the story in other ways. The use of stereoscopic 3D is very minimal, appearing only during the opening movie and when fusing demons.

Most of the music from the DS title remains, along with a handful of new tunes. While the lack of “Reset” is somewhat disappointing, the new theme “Soul Survive” is arguably just as good. Though there are a number of great tracks, the game has a surprisingly small amount of music, and some of its less impressive pieces are perhaps used too often. Fortunately, two of the brand new pieces are fantastic, both used during a new boss stage on the Eighth Day.

One of the biggest changes to Overclocked is the inclusion of voice acting, allegedly the most voiced dialogue of any Atlus game to date, complementing an already strong narrative. The actors put a great deal of effort into their lines and most characters’ voices are quite fitting. There are one or two individuals that may annoy some people, but they’re not so bad that they ruin the experience. While the actors are made up of several familiar Los Angeles anime personalities, many of the major characters seem to be performed by less prominent actors. Interestingly, and perhaps not surprisingly, most demons that speak don’t have fully voiced lines, but instead growl, grunt, and sigh. Having different sound effects for various demon types does make for a nice touch.

Though the downgrade in the New Game + benefits is an inconvenience, Devil Survivor Overclocked is worth both playing and re-playing. The voice acting adds to the game’s story, the new demons and skills are a great benefit in combat, and while I can’t speak for the quality of all the Eighth Day scenarios, at least one of them is a well-done extension of the plot. Even the smaller touch-ups like the enhanced graphics, improved text font, and new music tracks add to the experience of the game. Having three save slots instead of one is also appreciated. Overclocked may not be a new title, but for fans who own or will eventually get a 3DS, it is certainly worth their time. Of course, anyone new to Devil Survivor will want to pick up this version if they have 3DS access. Devil Survivor was one of the DS’s best games and Overclocked is a great title on the 3DS. 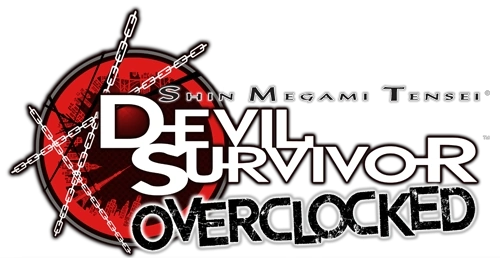