Out of the Shadows

(Note — publication date is not known and has been estimated)

What began as a pen-and-paper tabletop RPG found, with the help of a successful Kickstarter campaign, a new lease on life in 2012. Shadowrun Returns, a turn-based tactical RPG, is a return to form that put the franchise back on the current RPG map. The game’s narrative, though standalone, features some familiar faces from the Shadowrun universe, and is easily its Dead Man’s Switch campaign’s strongest suit. It starts as so many crime noirs seem to — in the run-down apartment of the player character, a down-on-his-luck Shadowrunner for hire. Things look suitably grim and dark — no cash flow, no work, no real way to scratch out a living. A maniac knwon as the Emerald City Ripper is making the streets of cyberpunk Seattle unsafe for all meta-humans. Then the phone rings. The caller: Sam Watts, one-time pal and the Ripper’s latest victim, calling from beyond the grave with a mission of personal revenge and promises of bountiful payment.

The game’s somber setting dovetails nicely with the macabre bent of the story. While on the killer’s trail to seek justice for Sam, players explore dilapidated tenement buildings and insane asylums, and cross paths with street thugs, illegal brain implant cartels, and fanatic cultists. Not to mention a corrupt police force and the ever-present dangers of an impoverished society riddled with rampant racism. The futuristic world of Shadowrun has seen the rise and attempted integration of meta-human races — elves, dwarves, trolls, and orcs — with only limited success. As the game unfolds, the search for the Emerald City Ripper soon moves from the slums to the white-collar offices of mega-corporations as the hunt for a serial killer evolves into something even more deadly. The sudden shift in mood at the second act is a little jarring at first, but the tonal shifts are a continued theme of the game and add to its overall feel.

At the game’s outset, players get to choose one of the five playable races for their Runner, as well as customize their appearance and choose a combat class. Six classes are available in all, from the built-tough street samurai, to the more traditional spell-casters like mage, adept, or shaman, to the rigger who fights via proxy using combat drones, and the decker whose specialty is jacking into the virtual world of the Matrix, letting a digital avatar do his fighting for him. Alternately, the player may choose to go with no class at all. Some classes’ special attributes also come into play during the non-combat parts of the game; the shaman, for example, plays a pivotal role during the Ripper investigation by communing with the deceased spirits of his victims. The various character classes should offer a bit of replayability, but they control very similarly. 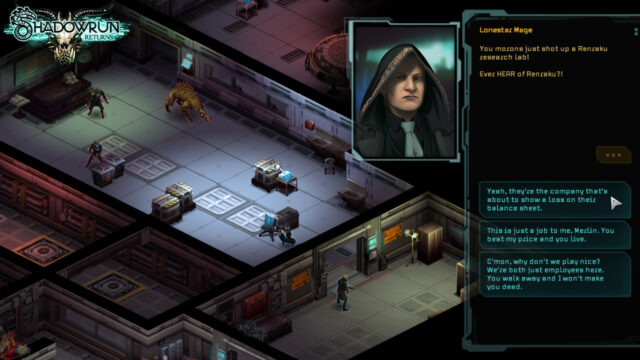 The narrative unfolds in storybook quality.

Completing missions, achieving optional objectives, and sometimes just being an all-around hardcore Runner net players Karma, Shadowrun‘s take on skill points. At any point, these can be spent on any of a wide array of skills and stat bonuses for the Runner. The skill tree is varied and expansive, and allows for some in-depth customization. Whether ranged combat or up-close-and-personal fisticuffs, each weapon type has a completely separate skillset to upgrade, each one dependent on first leveling up its associated player stat, like Quickness for firearms, or Strength for melee. Deckers and Riggers will want to invest points into Intelligence, but five Intelligence-related subskills make for a long list of possible combinations to unlock. Though players will earn a fair amount of Karma during the course of the game, the further they advance a particular skill, the more expensive each upgrade becomes. Skill caps differ for each race, making some upper-level skills entirely off-limits for certain races. Still, at an average skill cap of ten, it would take fifty-five Karma points to completely master just one skill; there are nigh on thirty skills in the game, and many are capped above level ten. It’s impossible to hit even half of what’s available during a single playthrough, and there’s a constant feeling of trade-off. Environmental actions, combat abilities, and even dialog options frequently depend on certain skills having been previously attained.

Unfortunately, all these customization options to encourage replay feel unnecessary, only serving as a reminder of things that cannot be done in a particular playthrough. The various playable classes fall a little flat, mainly because during the course of the campaign players will have the opportunity to put together squads of Shadowrunners to accompany them on missions for appropriate compensation, or at least a share of the profits. This provides ample opportunity to experience all the playable classes in and out of combat, and removes the mystique of restarting the game for a different combat experience. However, there’s good news: the years since its release and an active modding community have provided additional downloadable missions and campaigns for players to take on once the game has ended. This, more so than anything else, is reason to keep coming back to Shadowrun Returns.

The core game clocks in somewhere between fifteen and twenty hours and is divided pretty evenly between narrative roleplaying and isometric combat. While the combat system is absolutely serviceable, Shadowrun‘s writing is what ultimately seals the deal — it is, in a word, outstanding. Future Seattle’s uncompromising grittiness is portrayed in satisfying detail, loading screens when entering new areas feature flavorful exposition of ongoing events, and characters are written with distinct personalities and believable reactions. The dialog itself is spot-on, portrayals are vivid and conversation options are very intuitive, and replies provide enough options for the player to choose exactly how a roleplayed Runner would respond in a given situation. Even outside of actual dialog, narrative text boxes pop up frequently, blurring the line between an enjoyable game and an outstanding book. The world of Shadowrun Returns really does come alive in the player’s imagination due to the superb writing, much more than the graphics alone could have hoped to achieve. 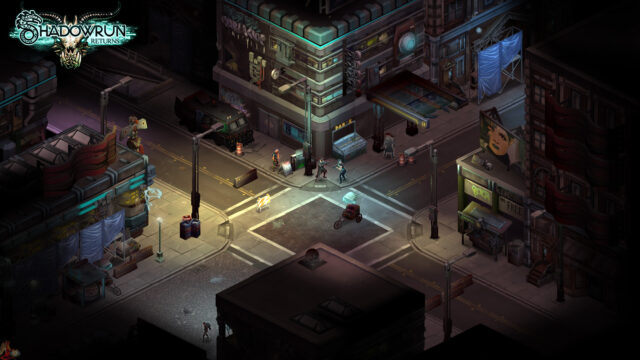 There is an impressive amount of attention to detail evident in the environments. The Seamstresses’ Union, the central hub for most of the game — equal parts seedy neighborhood bar, strip club, and black market — features appropriate wall decorations hanging behind the bar, while the litter-strewn streets of Redmond Barrens feature a patchwork of cobbled-together storefronts and merchant booths of corrugated metal. However, environments aren’t so filled with minutiae as to detract from their functionality when the Runners encounter enemy units and the game shifts into combat mode.

Though by no means bad, combat is the one area where Shadowrun Returns lacks the polish that is otherwise evident throughout. Combat is turn-based, with each character and enemy performing as many actions as their number of Action Points allow. Moving to a better position or running for cover uses AP; more AP means a wider movement range. Each attack or spell uses further AP, as does reloading a weapon. Some guns, like machine guns, come with a large clip size and can last many rounds, whereas shotguns typically need to be reloaded every other turn or so. The number of AP each character has available per round can increase through skills, but can also be affected negatively by status ailments and enemy spells.

Certain aspects make the combat a bit more tedious than it needs to be. The lack of map rotation sometimes makes positioning characters and spotting line-of-sight blocking objects difficult. Defensive tactics are basically limited to ducking behind cover, if any is available nearby. Fallen allies must be treated and stabilized by using a recovery item or casting the appropriate spell, though they can only survive a few rounds in this state before dying for good. Death is permanent, and characters are removed from the game entirely if lost in battle. A full and versatile squad, though pricey to hire and outfit, will be up to most challenges, though players do have the option of charging headlong into missions without more hired hands.

In the end, Shadowrun Returns is more than a sum of its parts. Combat didn’t leave me smitten, but it worked absolutely fine, even though I would have liked a more tactical feel to combat, rather than a simple “shoot until it’s dead” strategy. There weren’t many side quests or extra missions beyond the main story to send my Runners on. However, the true draw of the game is to be transported to the Shadowrun universe, and the game delivers on the roleplaying aspect in spades. Intuitive dialog, an aggressively detailed canon to draw from, and impressive writing combined to make me regret each time a gaming session ended, and champing at the bit to pick up the story where I left off. An impressive amount of fan-made content will keep the game installed on my hard-drive far longer than its short-ish campaign requires.