The world of RPGs is a surprising one to see Serious Sam in. Nevertheless, as part of the Serious Sam Indie Series, Dutch developer Vlambeer has risen to the challenge with the creation of Serious Sam: The Random Encounter. Vlambeer’s creation certainly is a fascinating concept and contains a battle system that has great potential. Unfortunately, an incredibly short experience with a distinct lack of other features leaves one to only wonder what could have been.

The battle system of The Random Encounter can likely be best described as a turn-based shmup. Battles consist of Sam and his two companions running backwards while firing at their enemies who, true to the Serious Sam tradition, are many in number, easily reaching triple figures as the game progresses. Players can move the Sams up and down, which is necessary in avoiding both projectiles and charging enemies. Every five seconds the battle is paused and players can give new instructions to the three Sams. 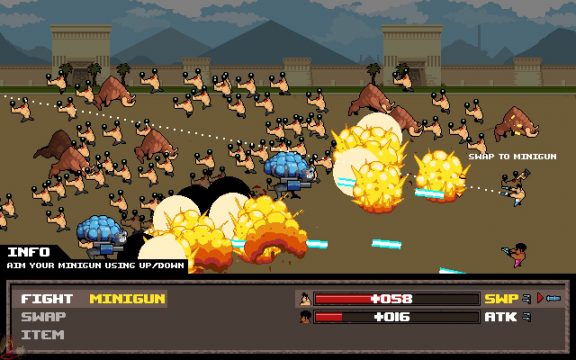 Fortunately you don’t have to target them individually.

These instructions usually consist of ordering the Sams to fire one of the various weapons, but they can also use items picked up during the game. Good use of the weapon types is vital for success in The Random Encounter and a good amount of decision-making is needed to figure out the best weapon load outs for each situation. Each weapon has a different effect; the shotgun will only work on enemies within a certain range, while the minigun will fire a continuous barrage in a single direction that is set by the player. Despite being turn-based, the battle system remains action packed in its bursts and offers a very good challenge, with players unable to rest on their laurels. However, the spike in difficulty for the last level may infuriate some.

Unfortunately, outside of the battle system, there is very little to do. A few of the nine levels do include puzzles, although calling them that is slightly generous as they generally consist of finding an obvious key or killing enough enemies. Each level is also very small, with the game’s length made up mostly of a very high random encounter rate. There are some chests in each level, which contain items that may prove invaluable in some battles, most notably the item that damages every visible enemy. Experience points and attributes do not feature in The Random Encounter; damage is determined solely by the equipment. There are a number of bosses in the game and these fights are well designed, requiring players to recognise patterns and each needing different tactics to beat.

The premise of the game is that in his search for the series’ antagonist, Mental, Sam is sent into the future, but outside of this the story in The Random Encounter is virtually non-existent. Each of the nine levels features no more than a few brief lines of dialogue. Humour is also sadly lacking, being limited almost exclusively to comments about how Sam’s sole solution is to shoot things, and complaints over the (very limited) puzzles. Along with the lack of any cohesive story, the game’s length of two hours or less will disappoint. Completing the game does unlock an Endless Mode, which challenges players to kill as many enemies as possible in a series of battles before being defeated. The game keeps track of the high score, but unfortunately there are no high score tables for comparison so the replayability of this mode is rather limited. 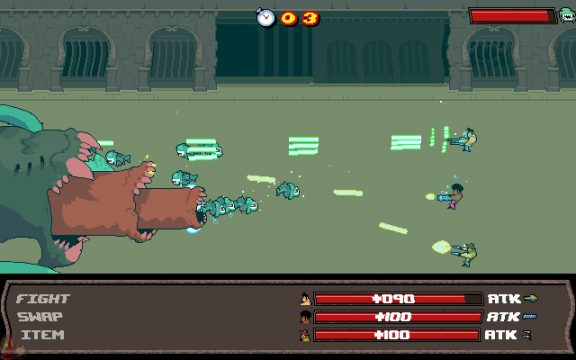 Scientists have yet to determine the evolutionary story behind this creature.

Random Encounter’s sprite-based visuals are generally pleasing to look at. They manage keep a distinct style for the game and the UI conveys all the necessary information well. A wavy effect is added for battles that take place in the water, which is a nice touch. Location aesthetics are also well designed, although the maps are disappointingly small. Battle turns are appreciatively chaotic, with the massive waves of enemies and gunfire from the Sams meaning the screen is full of action. Music and sound effects also do their job well, albeit without being very memorable. Both blend in well with the retro JRPG style of the game and neither ever gets annoying, somewhat helped by a lack of time to actually get annoying, although there is an option to turn them off should the player wish.

Overall The Random Encounter is an excellent concept let down greatly by its execution. The idea behind the battle system is interesting and that in itself is decently executed, but there simply isn’t the content to back it up. It’s frustratingly clear that simple things such as the addition of more levels would do wonders for game’s value. In its current state The Random Encounter could certainly be a highlight in a package of such games, however, as a standalone product it falls short and is difficult to recommend over other similarly priced indie titles that offer so much more. 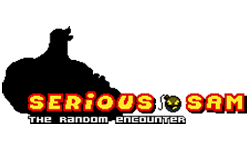