Saving Ricki’s Girlfriend, One Game at a Time

I have been both delighted and underwhelmed with the 3DS offerings in the River City Ransom series. I enjoyed the classic beat-em-up action in Tokyo Rumble, and Knights of Justice had some promising moments in an otherwise mediocre RPG spin-off. Natsume’s latest offering in the franchise, River City: Rival Showdown, is closer to Tokyo Rumble, and while it has all the parts of a River City Ransom game, it’s ultimately a forgettable experience with not enough direction or action to keep it relevant.

One evening after school, our intrepid hero, Kunio, is attacked by two nefarious bullies. At the same time this is occurring, Ricki’s girlfriend has gone missing, and it’s up to Kunio to help his friend solve this mystery. Over the course of three days, Kunio must battle his way through River City, uncovering the truth of what has happened to Ricki’s girlfriend and why he was attacked. 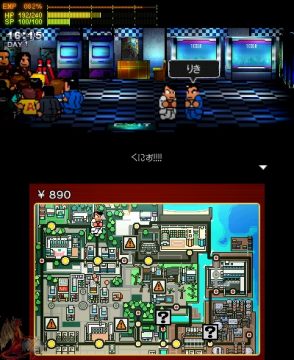 Maybe this isn’t where you should be hanging out after school, Kunio.

In terms of storytelling, there’s not much here. The plot is fairly barebones, and is often triggered when the player moves into an area marked with an exclamation point. Part of the lack of storytelling comes from the fact that this game is a beat-em-up, the other stems from it being an open world game. While neither of those aspects are necessarily bad, Rival Showdown has a time limit that makes exploration a bit vexing. Kunio only has three days to solve this mystery, and even then he only has from 3pm until 11pm to explore River City before the day ends. Time moves with every action the player takes, and while it is a lot of time, it often feels very short. Unless the player wanders into a marked area on the map, most of the encounters are randomized, and time can easily be wasted if enemies beat Kunio into a pulp. If players can succeed in completing different parts of the “story,” they are treated to one of many different endings, though considering how lazy the narrative is, this doesn’t feel like much of a reward.

This leads into one of the biggest gripes with this game: the enemies don’t scale to Kunio’s level. Since the game is open world, it’s easy to wander about and hit some random encounters. The problem is that there are cases where the player doesn’t know if they will be fighting something around Kunio’s level or much higher. While enemies will drop weapons, it’s still not very helpful, and if players hope that enemies will drop money — forget it. Seldom are coins dropped, making it very difficult to be able to upgrade Kunio’s gear. Players will spend a lot of time kick-punching bros, trying to steal their weapons and hope that maybe, just maybe, they will have enough coins to potentially buy either gear or a new skill. However, the game wants the player to grind and not die, so getting upgrades feels like torture because there is so little incentive on the game’s part to care. 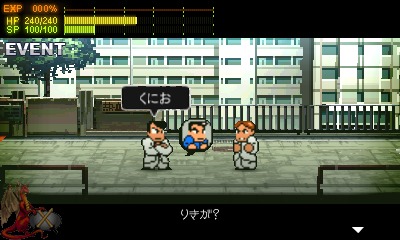 The areas where Rival Showdown does shine is its audio and visuals. The audio and graphics sport retro beats that make the game nice to look at and interesting to listen to. Neither one pushes the 3DS hardware, but it’s not necessarily a bad thing. The game also sports an adjustable difficulty, even though it doesn’t entirely feel balanced. A playthrough of Rival Showdown can clock in at slightly over four hours just to complete the main story. The game can also be enjoyed cooperatively if you have a friend to play it with, which may negate some of the difficulty spikes that occur. There is also a Double Dragon Mode, which plays like a fighter, allowing the player to pick their character and fight in a 2D battle area. This mode is fun for a lark, but otherwise adds nothing to the overall package.

River City: Rival Showdown isn’t a strong or memorable title in this franchise, especially when compared to Tokyo Rumble, which is by far the more quality game. With the lack of direction, the difficulty spikes, and the time it takes to upgrade skills and equipment, Rival Showdown is an exercise in frustration more than anything else.