In a short period of time, two spin-offs of the popular MMO Ragnarok Online have graced handhelds in North America. Ragnarok Odyssey provided a monster hunting experience that, while enjoyable, couldn’t quite reach the desired level of what it was trying to emulate. Meanwhile, the PSP’s tactical RPG entry, Ragnarok Tactics, is a similar story but for different reasons. It’s an able addition to the list of tactical RPGs, but one that neither brings anything new to the table nor manages to stand out against the system’s already large selection.

Immediately after creating their hero, players are sent into the prologue, which serves the purpose of introducing most of the main characters before they split off onto their appropriate factions’ routes. The player character is initially part of the Toren Militia, a monster hunting group that finds itself in the middle of tensions between the Branshaldo Empire and Aura Republic. Unsurprisingly, things soon escalate into war and it’s at this point that players can begin to do their own thing and choose which of the factions they want to follow into battle.

Gameplay in Ragnarok Tactics veers heavily towards the simpler end of the tactical RPG spectrum. The standard grid and turn-based template is adhered to without many additional features or complications, including a selection of the usual class types, although four slightly more interesting ones are unlocked upon starting a second playthrough. There are a few more advanced features, such as the Overdrive and Burst Strike bars that allow more powerful combos and team attacks, but these don’t require much additional thinking. That said, the relatively simplistic systems work pretty well, and the charm of tactical RPGs that encourages players to keep going with one more turn is happily present. However, those looking for any real depth will struggle to find it here. Early on the UI can feel a bit sluggish, and it also lacks an option to speed up battle animations except for the Burst Strike, but it is easy to get used to and isn’t particularly noticeable after a few hours of play. 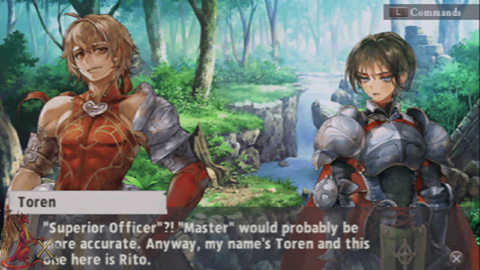 Which do you think is the 36-year-old?

Customisation is afforded mostly through the creation of the player’s hero and mercenaries that join them in battle with the appropriate story characters. Players can select each character’s name, gender, age, class, hair, and voice for the various battle cries. Equipment systems are also present, each character being in possession of one slot each for weaponry, armour, and a hat, plus three slots for cards that convey various bonuses and that are obtained by defeating enemies. Characters each have two sets of levels: a base level and a class level, the latter affecting which skills are available in addition to various attribute bonuses. New skills are learned fairly regularly and a point is given every three levels to spend on upgrading an existing skill. Gaining levels is entirely dependant on action taken during battle and characters can change to a new class at any time, although this will return the class level to one. These systems are all fairly straightforward in practice, again doing the job without bringing much new.

The biggest areas of concern lie in the game’s AI and balancing. The AI feels very simplistic and is easy to outmanoeuvre; with rare exceptions, enemies will only begin to act once players move within range or they are attacked. This means that battles turn into a repetition of luring one or two enemies out at a time and promptly ganging up on them. Regrettably, those who try a more traditional tactical approach will be a bit waylaid by the fact that a character can be KOed in two to four hits and enemies will frequently pick on one of the characters that cause an instant game over when defeated. The game does not feature permadeath, but there appear to be no revive items or skills that can be used in mid-battle. Balancing issues stem from an overpowering of a few classes that can completely dominate battles, which appears to result from the battle system and character progression greatly favouring speed and attack attributes while neglecting defence. In the end the game becomes all too easy to exploit and any challenge effectively has to be self-imposed.

Aksys’ localisation is good and lends a great bit of charm to many of the events and dialogue, however, the story doesn’t really manage to get that far off the ground. Events that the player is not part of due to choosing to side elsewhere are given one or two sentence summaries, which makes sense as that is likely the extent of the information that the player character would be hearing. This is somewhat counteracted, however, by the next battle’s preview scenes that give the player information they almost certainly wouldn’t hear. The main story is decent, if rather light at times, but it’s the sidequests that provide a large percentage of the game’s narrative highlights, adding some much-needed charm and character to the world. Unfortunately, the ending and epilogues that accompany the initial routes are a bit of an anti-climax, and the fairly easy and short main quest, which can be completed in around fifteen hours, fails to evoke any real sense of achievement. 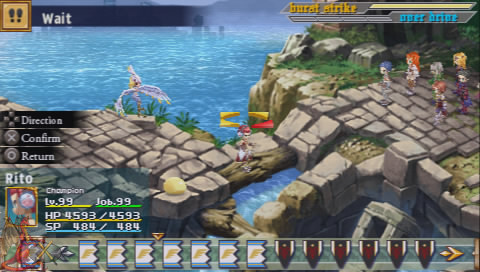 There’s either been a lot of playthroughs, or someone cheated to take an impressive screenshot.

Ragnarok Tactics‘ multiple route system does a good job of encouraging multiple playthroughs. Each chapter has a number of events to choose from, each associated with one of the game’s factions. The initial playthrough has three possible endings, each concentrating on the story from the view of the relevant side. While it is possible to switch routes between, say, Branshaldo and Aura at any point, there doesn’t appear to be any bonus to doing so. It feels less disjointed to witness the complete route of one faction rather than chopping and changing, especially as the choice in which route is taken doesn’t appear to have an effect on the overall story itself. Instead, the route system merely determines which of those events are seen by the player, at least in the case of the original three endings. Two more endings can be unlocked with multiple playthroughs, as well as the A.I.Z. system that allows players to go back to a previous point and take part in events they weren’t present for in their original choice. The New Game Plus option keeps character progression and a record of the events seen on previous playthroughs, making it a lot easier to get through previously unseen events more speedily. A simple button to skip through the game’s text also thankfully allows players to pass over any dialogue they might not wish to read again without fuss.

Both on the visual and sound front the game is pretty forgettable. The generic sprites and enemies are recognisable but not very detailed, and animations and battle effects do the job but don’t particularly impress. Some of the backgrounds are quite nice, however, but fail to stand out placed against the vast majority of PSP games already out there. The soundtrack follows this theme of being functional, without any annoying tracks, but failing to latch onto any part of the memory. Outside of the game’s intro movie, there is no voice acting outside of the various battle cries. Some of these battle cries can get annoying quite quickly, but fortunately the game includes an option to turn these off at any point.

Those expecting an experience from Ragnarok Tactics on par with Final Fantasy Tactics or Tactics Ogre are likely to come away disappointed. While the game doesn’t suffer from any major issues or grievances, there just seems to be a general lack of inspiration or anything to make the game stand out. However, Ragnarok Tactics is a decent time-killer that should at least be able to satisfy any tactical RPG itch, albeit one unlikely to make an impact on many favourites lists. 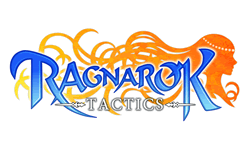