While many games have attempted to build upon the unlikely success of Puzzle Quest, the original RPG and match-3 mashup, few games have come close to the original’s appeal.  With the wildly popular Nintendo Switch, the original developers are hoping to show a new generation of RPGamers the joy of matching three or more gems, with the latest revisit to the game.  Puzzle Quest: The Legend Returns not only brings forward all content including a patch previously stuck on bygone systems, but also adds new content, new companions, new classes, and new technical issues.  But hey, the game’s very pretty now too, so is it worth taking the good with the bad?

Combat was revolutionary twelve years ago, but has been copied so often in the interim that most players should have some kind of passing familiarity with the concept.  An eight-by-eight board, filled with a variety of coloured pieces, is the battlefield where the hero and their opponent take take turns swapping adjacent tiles to make matches.  There are four mana colours — red, yellow, blue, and green — which each combatant can gather to cast spells.  There are also purple experience gems, gold coins, and skulls, the last of which is the primary way to deal damage in combat.  Matching four of a kind will grant a bonus turn for either side, and matching five of a kind not only nets an extra turn but a multipier tile, which can be used with the four mana colours to cast spells faster.  This back-and-forth ends when one side or the other is depleted of all hit points.  Should the player fail to overcome their foe, they are kicked back to the nearest map point, with some measure of experience and gold acquired and the opportunity to try again; this is a nice change from the original, which gave almost nothing for losses. 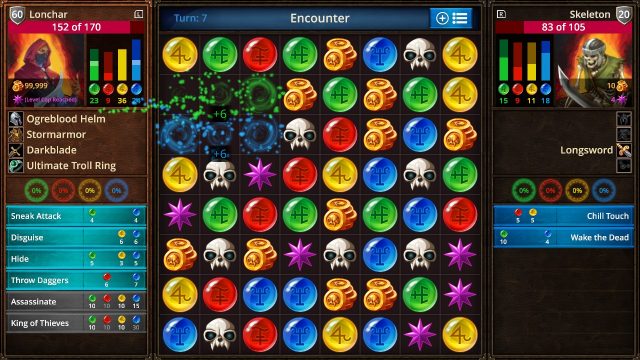 As heroes level up, stat points are awarded, four per level, which the player can spend as they see fit in a variety of categories.  First are the four mana colours, increasing not only accrual rate but also the max capacity for mana storage.  Battle increases damage with skulls, while morale increases both hit points and experience gained.  Cunning is the final stat and not only dictates whether the player or enemy starts first in a battle (a strong advantage) but also experience and gold gained post-battle.  What stats a player will choose to focus on is largely dictated by class.  For example, the Paladin focuses on spells with yellow mana and can easily gain additional mastery in that skill, using only one point per rank. However, being a noble class means cunning is much more expensive to accrue, requiring four points per rank.

Returning players will appreciate that enemy AI has been diversified fairly noticeably.  No longer do certain enemies act counterintuitively to their needs, gathering mana of the wrong colours, as some did when the game launched on the DS.  Having more challenging enemies certainly helps during the expanded gameplay, where both new and familiar enemies crop up to make trouble.  New difficulty modes have also been included. Enemies are rated as typically easy, normal, or tough — though there are harder difficulties if a player is rushing only the main story quests — and players can choose to fight them on Easy for a 25% penalty to gold and experience, or on Hard for a corresponding increase in the rewards.  For enemies that long live out their welcome such as orcs, being able to flip to easy mode to quickly decimate them or flipping to hard to actually make them worth fighting changes the flow of the game in a way player didn’t have in previous installments. That being said, the alternative difficulties are not particularly well balanced.  Easy foes are straight up fools, preferring to gather mana and coins and ignoring opportunities to inflict damage, while hard foes can predict falling pieces, making ridiculously risky moves that always pay off.

Puzzle Quest: The Legend Returns also provides players who’ve been there, done that with new content; these includes both the Revenge of the Plague Lord content, first released on XBox 360 and later being added to the iOS version, as well as an entirely new story chapter, Attack of the Golem Lord.  There are also new classes to explore at all challenge levels, from the simple-to-use Paladin to the difficult to master Blood Mage, with Priest, Monk, and Elementalist complexity falling between the two extremes.  These new classes are particularly well done, as they focus on mana combinations that the original class structure didn’t.  Lastly, new companions have arisen, including Storm, whose story revolves around the giant insects that plague the Puzzle Quest lands.  The developers have done a good job threading this newest content — Golem Lord and Storm offer up about 100 quests between the two new additions, though sometimes Storm’s obsession with ants makes his quests repetitive. 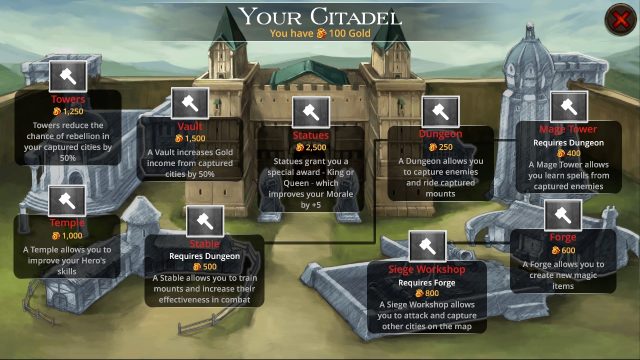 A key part of Puzzle Quest’s gameplay is the Player’s Citadel.  Originally only available in a single city, players can siege any city in the world and use it to access their citadel after building a Siege Workshop. While most buildings simply work by having them other buildings are more interactive.  Perhaps the most important building is the Temple, where players can spend their gold on increasing stat points. As all stats cost the same amount of gold, as opposed to the differing point costs, spending money on skills that would take three or four talent points is a great way to balance a hero’s mana pools.  After defeating any enemy three times, by having a Stable or Mage Tower, players can elect to capture a foe, accomplished by completing a small mini-game where all pieces must be removed from a pre-determined board. The Mage Tower allows heroes to memorize the spells their enemies cast by matching a certain amount of each mana colour. When an animal is captured, players can then use it as a mount, and can be trained further in the Stable, by completing matches against the creature with a timer on each move.  The higher level the training, the shorter each turn time is.

The Legend Returns adds new enemies to capture for both the Stable and the Mage Tower, but it fails to fix a critical issue with mount speed.  Certain equipment is tied to the mount the player uses, but respawn time on random map monsters is so high that using anything but the fastest mounts is not viable after a few hours into the game, when frequent and sometimes long travel is needed.  As opposed to letting a player choose their mount based on personal preference, heroes are forced to choose speed over anything else.  This was a prime opportunity to equalize the speed of all mounts and it’s disappointing it was missed. 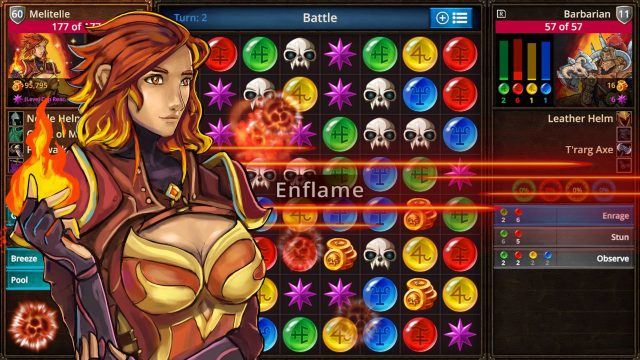 The Switch version of Puzzle Quest is the best the game has ever looked.  The grid has beautiful pieces and smooth movements, and even has a little bounce mechanic for especially long combos and piece drops.  Fully voiced cutscenes are not new, but like the rest of the game they look incredible. Unfortunately, the game has acquired noticeable slowdown during both travel on the map and big battle combos.  While this is less evident when playing docked, it stands out on handheld.  The game also crashed four times during the forty hours it took to wrap up most side quests, the new questline, and the game’s original storyline, though players who also wish to tackle the Revenge of the Plague Lord and its associated side quests can easily tack on another handful of hours to their time.

While sounds and music have been clearly improved, it seems nothing new has been added to either.  This was a particularly weak point of the original game — spending so much time in combat means the music and sound effects become incredibly repetitive.  Adding a larger variety in this sphere would have been a marked improvement, and it’s disappointing to see it was overlooked.  This alone won’t decrease enjoyment of the game, but playing the game silently while flipping on a podcast becomes increasingly attractive as the game’s length increases.

Having played numerous Puzzle Quest offerings, including Nintendo DS and Xbox 360, as well as iOS, Puzzle Quest: The Legend Returns is the definitive way to play the first adventure, despite the slowdowns and occasional crash.  It’s both beginner friendly with improved tutorials as well as veteran compatible with new content.