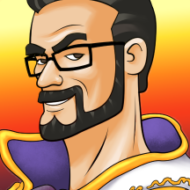 JCServant
This user account status is Approved
About About
Comments Comments

No other interests provided

Peter Clines, Brandon Sanderson, and many others.

Superhero cartoons from the 80's and 90's, such as ThunderCats, Transformers, Batman, X-Men and Justice League.

I started playing D&D pen and paper, as well as the Gold Box PC games back in the late 80's. Since then, I have enjoyed the best RPGs from most consoles, including handhelds, as well as the personal computer. Now hitting my third decade of RPGaming, I am excited to share my passion and past time with any who care to discuss.

Salutations! Like many of my peers, I grew up adoring comic books and video games. Throughout the years, I have added other hobbies to the list, such as audiobooks, WWE Wrestling, and collecting old TV series on DVD. However, time and again, I return to gaming as my main form of relaxation.

I started playing video games on the Atari back in the mid 80's. However, when the Commodore computer system came out, I really fell in love. Dungeons and Dragons Gold Box Series, premiered on that system. My first computer role playing game experience exceeded all expectations with flexible team creation, original (for the time) story lines that continued from game to game, and deep, tactical combat. Since then, I have owned every major system, playing the best RPGs I could find.

As I got older, I grew a sizable collection. I usually only let go of a system when I have a way to emulate it on a new system. While I have enough old RPGs to keep my happy until I die, I also look forward to new games, and will often buy the good ones as soon as they come out. If they do not capture my interest right away, they go into by backlog of unfinished games, to await their turn patiently with my other unfinished adventures. People question my propensity to collect such an array of RPGs across so many consoles, including handhelds and the PC. To me, each one is a new adventure in a far-off land. To simply discard them would constitute an unthinkable crime. Like a librarian driven to preserve the knowledge kept in books and ancient writings, I take good care of my games. I keep an index and completion status on each one. With so many different worlds to explore, I never lack for something exciting to do!

I also enjoy strategy games of various types, as well as the occasional, well-executed platformer or shooter. However, nothing will capture my heart, or engage my imagination, like a good RPG. This especially includes the pen and paper variety. I play both Pathfinder and Dungeons and Dragons nearly every week to this day! With 30 years of good RPGs behind me, I look forward to playing RPGs until I'm an old geezer and can no longer hold a gamepad.

With over a decade as an RPGamer staff member under my belt (hired October 2008), I still enjoy the heck out of producing the RPG Backtrack podcast with my good friend, Mike (aka JuMeSyn). Recently, I started the #CRPGClub, dedicated to discussing older computer role playing games. I'm proud of the work we have done with the other staff members on the podcast and the site. I have also met and enjoyed the company of countless of RPGamers here, and thank God for the opportunity to do so.