It’s not often that I have to ask myself, “What the hell did I just play?” Over the course of time, I’ve dipped my toes in many RPG pools featuring a great variety of design ideas and gameplay mechanics. Nippon Ichi’s Penny-Punching Princess might win the prize of the most oddball concept for a video game, a fantasy action RPG where money talks and capitalism leads to victory. But instead of cashing in on its unique premise, the game’s one-note execution, paper-thin story, and frustrating difficulty drive its fun quotient into the red.

The game’s story, such as it exists, is quickly summed up. Ten years ago, the benevolent king died, apparently from worry about the debt he had incurred with the kingdom’s powerful Dragoloan. Now, the orphaned princess is out for revenge against the money-lending dragons and their minions. While this could have offered enough for a rich narrative, Penny-Punching Princess struggles to stretch it enough to cover its eight-chapter framework, with the dialog snippets that bookend each of the approximately forty missions frequently resorting to the characters going off on unrelated tangents or wisecracks that just fall flat.

Princess‘s focus instead lies squarely on its frantic action elements. While traversing the top-down dungeons, wave after wave of Dragoloan minions will throw themselves at the princess, whose task it is to keep wiping them out until the dungeon is cleared. There is little variety to the missions players must complete; it’s either “kill all enemies” or “kill the boss”, with only a single mission also requiring the player to collect a certain amount of cash. It would have been great to see more variety in the mission objectives, as what’s on offer becomes stale very quickly, making the latter ten-hour half of the game a real slog to get through. Enemy variety and dungeon layouts are equally repetitive. Reskins abound, and there are only a handful of dungeon variations, with entire floorplans reused ad nauseam.

The one gameplay mechanic that adds a dash of flavor to the proceedings is the princess’s ability to use a magical calculator given to her by Zenigami, the god of money, to sway the flow of battle. Defeated foes will drop money, which can in turn be spent to bribe enemies on the fly, and make them into the princess’s allies, removing them from the battlefield and even letting the princess summon them to deal damage. This new mechanic is a welcome addition and can be a lifesaver: make no mistake about it, Penny-Punching Princess‘s difficulty curve is quite high at times, and having a calculator to fall back on is the only way through some tough spots. Still, with some bosses and encounters presenting extreme difficulty spikes, the odds of a frustrated ragequit can’t be ignored. 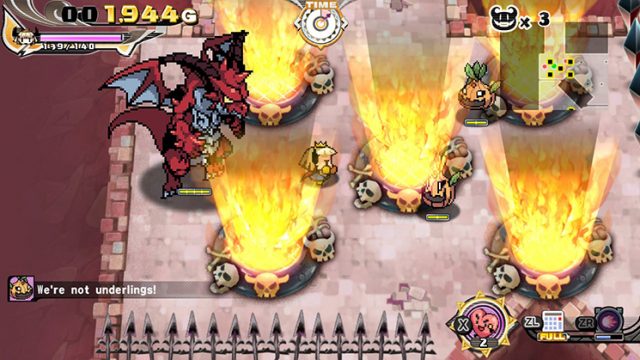 Out of the frying pan and into the dragon-filled fire pit.

Each enemy has its own price, as do the many traps that litter every nook and cranny of the dungeons. The key to victory, especially against large hordes or bosses, is deft use of the calculator to claim destructive traps like missile launchers or spike pits and activate them when the enemy gets close. There are enough enemy encounters that it’s rare to run out of money, though frivolous abuse of this system will cause the princess’s purse to quickly become depleted. A flaw in this mechanic is that it can be difficult, especially in the heat of battle with hordes of enemies advancing, to select and bribe the correct target with the calculator. Instead, quite often one has just enough time to press the calculator button, aim it into the crowd, and pull the trigger, hoping for the best. It’s a fun idea that offers some slightly more tactical choices for an otherwise straightforward action RPG, but it isn’t perfect.

Outside of calculator usage to bribe enemies, Penny-Punching Princess‘s combat is mainly a basic button-mashing fest. The princess — and later Isabella, an additional character unlocked about halfway through the game — can throw both strong and weak punches, and stringing together multiple weak strikes into a combo will stun and knock back opponents. There really aren’t any other bells and whistles to the combat to speak of, and there are occasional hit box issues, with some foes and traps seeming to connect even outside their range, and the player’s attacks occasionally missing when they seem on target. Despite the calculator to spice things up, the combat simply fails to keep things interesting for very long, and what follows is a palpable slog through hundreds upon hundreds of repetitive enemies.

The princess’s basic stats can be raised between missions, provided players earn enough skill points by collecting special Zenigami statues hidden in chests around each dungeon. Raising stats beyond the first few points gets expensive very quickly, and once Isabella joins the party, the skill point pool has to be split between both fighters. It’s also possible to create new and more powerful armor using the money remaining after completing a mission and the ever-growing collection of bribed creatures and traps, which act as a sort of resource that must be collected. Each piece of armor has different creature requirements, and it’s impossible to know ahead of time what creatures and how many one will need. Often this means return trips to previously-cleared dungeons, further slowing down the already soul-sucking pace of the game, making item construction needed for advancement feel more of a punishment than a fun diversion. 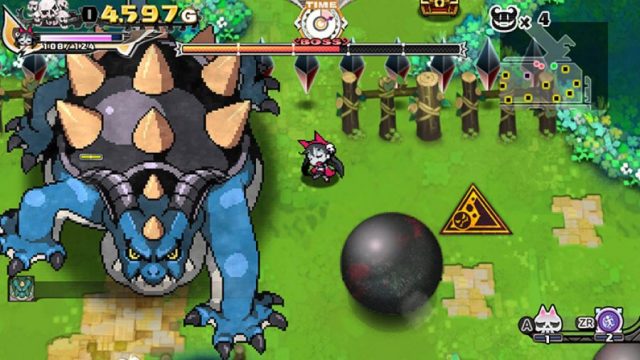 Thank you Mario! But our penny-punching princess is in another castle!

The game’s audio and visual presentation, while both being perfectly adequate, also don’t offer many bright spots to salvage the experience. Voiceovers are at a premium; only the narrator gets the occasional voiceover line of spoken dialog, while the rest of the cast is reduced to speaking in distorted blurbles and gargles. The musical score, on the other hand, isn’t bad, with a few tunes sure to get stuck in players’ heads, if only due to the repetition factor. Most of the tracks sound fine on their own, though a couple of early-game songs rely too heavily on screeching guitar riffs that seem at odds with the bright visual palette. Characters are represented by clean and colorful sprites, though the aforementioned palette-swapped foes and unimaginative dungeon designs mar the experience. Dialog screens, on the other hand, feature heavily pixellated character models. It’s worth mentioning that, despite the fairly low-fi graphical approach, and being on a powerful new system, Penny-Punching Princess suffers from slow-down when a large number of characters and particle effects are on-screen at the same time.

It’s hard to stay on a positive, upbeat track for very long with Penny-Punching Princess. There’s nothing inherently wrong with its focus on button-mashing action; in fact, the addition of the calculator to bribe enemies into joining you is a welcome idea that has merit. But each time the game hits its stride and lets the player feel a sense of fun, it’s quickly dashed by repetitive gameplay, dull story, or another crushing difficulty spike. This results in a feeling of ill will toward a game that seems ready to wrap up about ten hours in, then pulls the rug by throwing one false end after the next and piling another ten hours on top, more than outstaying its already limited welcome.