The original 2010 version of NieR, to put it mildly, went down in history as a far more complicated affair than it needed to be. Between the unusual decision to create two distinct versions (Gestalt and Replicant) in Japan, and only localizing the Gestalt version with its supposedly more western-appealing older protagonist, NieR split audiences and critics with its propensity to fly in the face of convention — not surprising given the track record of director Yoko Taro. This spin-off of the Drakengard series turned out to be equally as polarizing as its predecessor. The game’s 2017 follow-up NieR: Automata fared far better, despite also steadfastly refusing to bend the knee to norms. Automata’s success has now paved the way for Square Enix to foot the bill for Yoko Taro and development studio ToyLogic to not only remaster the original NieR for modern consoles, adding new scenarios, expanded voice-overs, and a whole new ending, but to finally bring the Replicant version to western audiences for the first time. The result is a qualified triumph that far eclipses its occasionally dated RPG design philosophies by virtue of a fun and fluid combat system and some marvelous character development.

The most prominent change evident in NieR Replicant ver. 1.22474487139…, to western RPGamers anyway, is the switch in player character from the older, grizzled warrior of Gestalt to the less-experienced stereotypical youth of Replicant; while Gestalt cast the player as a father attempting to save his daughter Yonah from a terrible disease afflicting her, Replicant puts players in the role of her slightly older brother. The story and Nier’s interactions (as he’s commonly dubbed, though never named as such in the game itself) with the rest of the cast remain largely unchanged in either version, and “Papa Nier” is even included as a playable character for the remaster’s packed-in Fifteen Nightmares DLC scenario. Other additional content includes Mermaid, a brand-new scenario adapted from fan fiction and woven directly into the game’s main story, and an all-new fifth ending available after viewing most of the other endings. 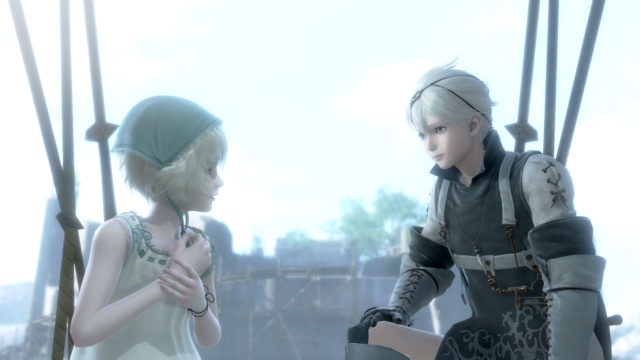 This time around, players are cast as the young, brotherly version of Nier, hoping to save his sister from the Black Scrawl.

NieR Replicant canonically follows one of the endings available in the first Drakengard, in which Earth has been devastated. A brief tutorial chapter takes place in a post-apocalyptic decaying urban setting in 2053, before the game lurches forward one-and-a-half millennia. Human societies, as much as they are able to exist, have devolved back to a pre-industrialization state; the areas outside the relative safety of settlements’ walls and gates have been reclaimed by hunting packs of wild animals, and are infested with mysterious creatures known as Shades. It is amid these conditions that Nier must set out to discover a cure for his younger sister Yonah, who has recently fallen ill with the enigmatic Black Scrawl, a disease relatively unknown apart from its lethality.

It doesn’t take long for Nier, while exploring the ruins of the Lost Shrine, to stumble across a peculiar sentient book seemingly closely guarded by the shrine’s guardians. Grimoire Weiss, as the talking book is called, lends Nier his aid by firing a variety of magical projectiles and spells during combat. Furthermore, the flying, egocentric tome claims to be able to cure Yonah of the Black Scrawl if Nier can defeat a number of powerful Shades in order to unlock the book’s Sealed Verses. This relatively simple motivation is really all there is to drive the player forward. Even after a certain crucial point occurs in-game — call it the narrative’s mid-point — and circumstances change, Nier’s impetus remains just as direct. 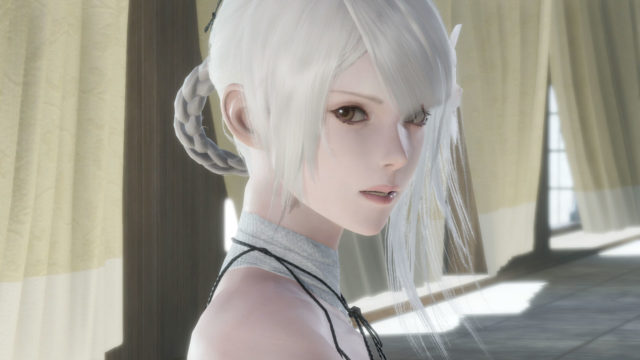 Replicant’s cast of characters will remain with the player long after the (fifth) credits have rolled.

The simplicity of what sets the hero on his journey, however, is quite forgivable, as the true joy here lies not in the overarching story itself but in the characters Nier joins up with along the way and the relationships they form with one another. Apart from the wise (and wise-cracking) free-floating Grimoire Weiss, Nier is eventually joined by the scantily-clad Kainé and the tragic youth Emil. This quartet is truly the heart and soul of the game, and much of the incentive in pushing through to the game’s conclusion, not to mention doing so several times to view bonus story content and further endings, is down to how near and dear these characters will grow to the player’s heart. While certain plot points are purposely withheld until subsequent playthroughs, requiring players to commit to a considerable time investment, the characters are developed so well that it is absolutely worth it. Rather than just being another “save the world” quest, the narrative is deeply personal and affects the principal cast in significant ways that just beg to be experienced in their entirety.

A major part of what makes the characters so fantastic are the outstanding performances of their English voice actors. Laura Bailey’s performance as Kainé and Liam O’Brien’s turn as Grimoire Weiss are individually fantastic, and their back-and-forth banter offers up some of the most entertaining lines in the entire game. Meanwhile, Julie Ann Taylor, voicing the unfortunate Emil, delivers a heart-wrenching and deeply emotional performance that won’t soon be forgotten. Though the option to switch to the original Japanese voice-overs is included, missing out on the masterful performances by the English-speaking cast would be doing the experience a huge disservice. Replicant includes more voice work than the previous releases, with every single line of text voiced, including those spoken by NPCs.

As enjoyable as the acting is, the game’s musical compositions are even more laudable. The game’s soundtrack has long been a fan favorite, and for good reason; memorable songs performed on instruments that fit the dystopian setting to a tee share equal time with haunting choral chants that permeate several dungeons with a brooding, not-quite-peaceful atmosphere. A certain quest giver in town spends her time strumming a lute and singing along to it, and approaching her causes her vocal track to slowly descend onto the town’s musical cue, quietly from a distance, then louder as Nier approaches. In fact, there are a good deal of beautiful lyrical pieces featured on the game’s soundtrack, performed in a wholly invented, mystical language by Tokyo-based English vocalist Emi Evans. A slight criticism would be that vocal tracks, by their very nature, become repetitive to the ear far faster than instrumental pieces, but when listened to in short bursts or isolation, NieR‘s soundtrack is a timeless classic full of equal parts serenity and unease. 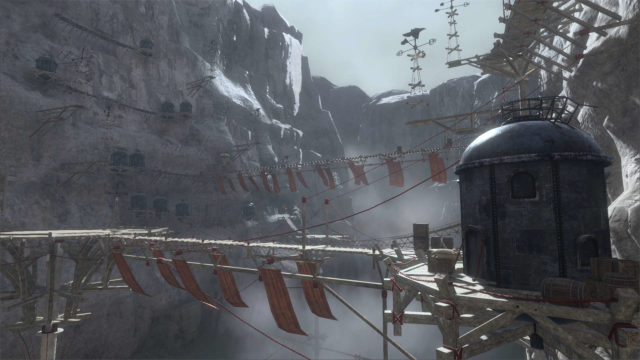 The Aerie is one of the more visually arresting locations Nier will encounter.

On a base level, there isn’t much about the combat system that sets it apart from what’s become the norm for fast-paced action RPGs like this. Players can execute both light and heavy attacks, and string them together into straightforward combos. Nier is able to perform rolling dodges, providing him with a very brief window of invincibility, and enemy attacks can be parried for a heavy follow-up hit. However, there are some additional aspects to the combat system that offer more strategy, particularly for the higher difficulty settings when simple combo button-mashing doesn’t quite cut it anymore. A variety of magic attacks can be learned and employed via Grimoire Weiss, including both ranged and close-quarters attacks, as well as some defensive spells. These can be deftly woven into melee combos at will, while players can swap between weapons mid-combo. Weapons have varying reach and swing speed, and can be upgraded provided the right materials are on hand. As weapons are upgraded, a codex is filled in with bits of lore about the world of NieR, and finding all thirty-three weapons is even a prerequisite for unlocking the later endings.

Enemy designs for normal Shades are fairly plain, generally just black figures of variable size and shape. Some are armored and require slightly different tactics to be bested in combat, but there’s little else to be said about them. Luckily, the same cannot be said about bosses, who are usually large and feature unique and interesting visual designs. More importantly, taking one down often requires frantically alternating between offense and defense, as windows to deal damage may open intermittently while the boss peppers the battle arena with an almost bullet-hell-eque field of magic projectiles. This lends a much higher degree of involvement to these encounters, making them a clear standout. 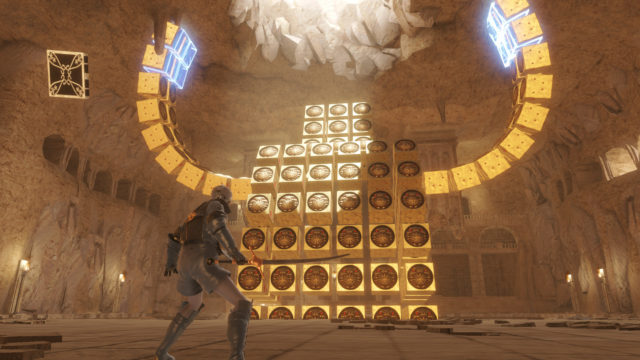 Bosses are generally large in scale and can feature some very unique designs.

There are a few bumps along the road for NieR Replicant, all of which are inherent to the original release’s design. Multiple endings (five, including the newly added Ending E) means plenty of repeated content. Without spoiling anything, it’s true that it’s not nearly as egregious as having to play through the entire game five times, but most players will need to complete at least two playthroughs to see it all, with several sections requiring additional repeats. While there is new stuff to see here and there, it’s hard to make a strong case considering the grind versus reward factor, and a large chunk of the narrative payoff could still have comfortably fit into a single playthrough. On top of that, the vast majority of the game’s sidequests consist of trite item fetch quests, and offer little narrative payoff. Sidequests, and progress made towards completing them, even persists across New Game Plus, suggesting the designers were at least aware of their limited impact. To ease the incessant backtracking among Replicant‘s handful of NPC hubs, a fast-travel system becomes available eventually, though it’s odd how much time passes by before it’s introduced. Even then, it isn’t always available and only connects to a few preset locations anyway, limiting its practicality.

This handful of nitpicks notwithstanding, NieR Replicant is a resounding success and a great opportunity to experience a remastered version of this hidden gem. It is absolutely a product of its time, as well as one of the more notorious design minds active in the industry, and it carries these marks on its sleeve, from forced repetition necessary to unlock its multiple endings, to action gameplay that doesn’t shy away from incorporating the occasional side-scrolling platforming or even visual novel section. Of course, new content is always a plus for returning players, but ultimately a hauntingly beautiful score and tons of amazing voice work that brings the unique characters to life for an unforgettable adventure are the true stars of the show, and make sure that no one, first-time players included, walks away as anything less than well satisfied.