I’d never heard of the Nexomon franchise until last year, but something about the graphics and the trailer hooked me. Perhaps it was the yearning for something simple after far too many hundred-hour RPGs played back to back, but I happened to track down a physical copy of Nexomon: Extinction the week it released on Switch, and I’m so glad that I did. This second title in the Nexomon series is the perfect sequel to a solid first outing: it keeps the turn-of-century monster collecting RPG charm while adding much-needed modern quality-of-life improvements.

Nexomon: Extinction opens with the player taking on the role of an orphan that has finally reached the proper age to become a Nexomon tamer. From this humble beginning, players are introduced to a broken world being terrorized by evil Nexomon Tyrants. The design of the overworld seems to be one of steadily recovering from apocalyptic times, but often enough events transpire and the land is shown to be pretty much at the brink of the titular extinction. Players’ tamers set off across a mostly open world, where their destinations are dictated more by how difficult the local Nexomon are to battle rather than the story itself or any physical gatekeeping. It’s an interesting opening to a game that doesn’t stray far from the “save the world” trope in the end, but rather enhances the journey right from the start. 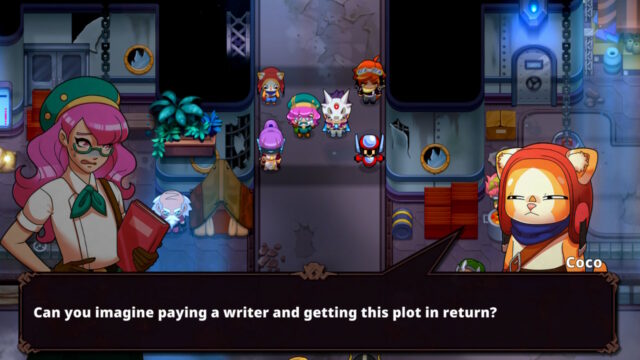 Coco’s typically spot-on with his criticism, but overall the game is well-written and has an engaging plot.

Nexomon: Extinction is a treat for the both the eyes and ears. With graphics that seem like an HD version of a GBA title, and a color palette that is bright with neat glowing color effects where fitting, it seems like a retro style game that’s been ramped about as far as one could expect a 2D title to be. The setting is partially post-apocalyptic and broken down vehicles and bones of dead tyrants dot the landscape adding gravitas to events that took place in the game’s history. While some of the Nexomon designs could’ve used a little more polish, the vast majority of the 381 little guys look great and are animated minimally, albeit nicely, in battle. The soundtrack for Extinction is quite good with everything from bangers like César Tovar Molina’s The Face of Extinction to much more melancholy tracks such as Daniele Coppola’s Farewell. It’s definitely a game best played with the audio cranked up!

The game includes a decent story, especially compared to others in the monster collecting genre, but what makes Nexomon: Extinction shine is its writing, especially Coco’s lines. The game features a silent protagonist, but trusty sidekick/cat-boy Coco follows along and narrates the entire game, quite often breaking the fourth wall. He goes from explaining how some game systems are based on other series to pointing out areas that were not created due to budgetary constraints of the developers, or flatting out telling players to skip a side quest and pretend it never happened, all in a deadpan way that makes the lines all the more humorous. All the genre tropes that players complain about in their heads as they play monster collecting RPGs are said aloud by Coco, begging players not to simply fly through dialogue for fear of missing the poignant humor on display. 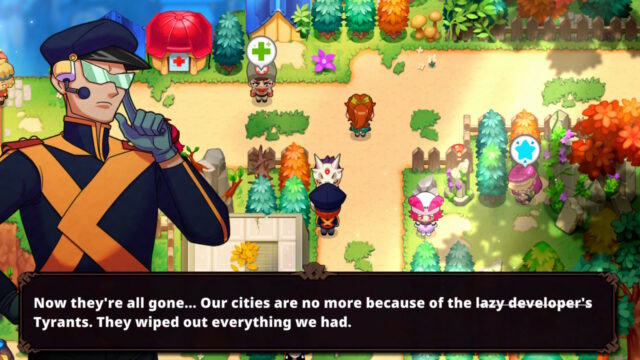 Tyrants or developers, either way, the world’s at the brink of extinction.

The battle system may seem similar to other monster collecting RPGs, but Nexomon: Extinction offers a complex system under the hood of a simple exterior. On the outside, there are nine families of Nexomon, with each creature belonging to only one of them. Attacks also belong to said families and each Nexomon can be strong or weak to different types. Nexomon can only know four attacks or skills at a time, so there’s not much to choose from in any given battle… except there kind of is. In addition to some attacks being stronger than others, attacks consume various amounts of stamina. Run out of stamina, and a Nexomon isn’t going to be able to attack for a round. Strong attacks that quickly deplete the stamina supply are not always the best bet, especially since Nexomon are quite strong and even random encounters can take more than a couple of turns to end. Rarely will a battle end in a single blow, even when player’s Nexomon have a type advantage and are multiple levels higher than their foe. Striking a balance between attack strength and stamina consumption is key to victory, especially in battles against other tamers that have multiple Nexomon.

The process of catching Nexomon has appreciable updates from the original title, with a with a percentage-chance indicator shown when capture attempts are made. Raising odds of catching Nexomon is easy to do via status effects, lowering HP, using type-specific nexotraps, and feeding Nexomon food in battle. The numerical percent chance is transparently shown to players as the capture attempt is being made. Further making the capture attempt more than just a toss and pray affair, once nexotraps are used, players need to complete a small, timed button-press mini game to complete the capture. The entire experience is a welcome, more involved improvement over the original Nexomon title. 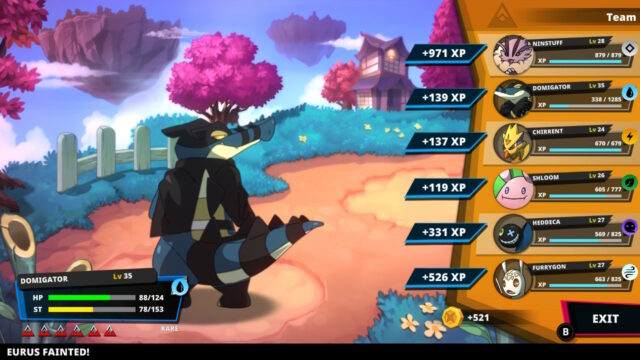 EXP totals at the end of combat, brought you by Synergy Cores, an important crafted item for all aspiring Nexomon tamers.

Another step up from the first title is the addition of the shard system. As players navigate the world of Nexomon: Extinction, multicolored gems can be seen glowing everywhere. Using a pickaxe on these gems, players can obtain one of eight different types of shards. These shards are the ingredients to making cores, orbs that each Nexomon can equip that alter their base stats. HP, attack strength, and defense, etc. can all be bolstered, but an ideal usage for shards is in creating Synergy Cores. Nexomon: Extinction doesn’t have an EXP Share item, so these cores are the only way to have Nexomon not involved in battle gain experience. Even better, they don’t just get part of the experience of the victorious Nexomon, they get it without the victorious Nexomon’s experience being diminished. The only thing better than shared experience is free experience!

A couple other improvements that make the Extinction journey a pleasant one is the way that players can interact with both the world and various game systems. Tamers found along the way don’t just battle players with a set team and then idly spew the same NPC comment for the rest of the game, rather their teams improve and evolve, and they’re ready to do battle after a bit of a cool-down period. There is also an island where players can go to quickly catch a variety of Nexomon, challenge trainers for some extra cash, and pick up a variety of shards use to craft useful cores, the centerpiece of the game’s customization system. Menus are clear and easy to navigate both inside battle and out. The ease at which Nexomon can transferred into battle or into the active party from storage when not fighting is also very conveniently done.

After recently completing the original Nexomon title shortly before this review, I’m even more excited about Nexomon: Extinction in hindsight. While the first title proved that VEWO could do a nostalgic monster collecting game, Extinction shows that the developer is willing and able to push the genre forward in more modern ways. While this review was written based on the Switch version, the game is slowly expanding to other platforms. With so many ways to play both games in the series, I wholeheartedly encourage RPGamers to give both a try however they can.