An Unconventional Hero Looking for Love

Back in 1997, during a prolific time for RPGs, an iconic anti-RPG appeared for the PlayStation. Moon: Remix RPG Adventure was created by developers who worked on conventional RPGs such as Super Mario RPG and Chrono Trigger. For more than 20 years, this game was an odd jewel that was difficult to approach since it was only in Japanese. In 2020, however, the game was localized for Nintendo Switch, with PC and PS4 releases following in 2021. More than going against the genre, Moon acts as a big tribute that leads into reflection upon RPG staples. Moon’s unique storytelling makes fun of role-playing game cliches, and while its exploration and puzzles offer similarities to the genre, they include a unique twist.

The game begins with a child playing a video game that tells the story of a hero that is incredibly brave and strong, leveling up and defeating all his enemies easily with hits that deal 9,999 damage points. During this introduction, all the cliches of RPGs are satirized in extremely short passages of the hero’s journey. However, the child suddenly gets sucked into the TV, and that’s when the real story begins. The little boy appears in what seems to be the world of the game. Soon after, the Queen of the Moon appears in the dreams of the protagonist and tells him that he needs to gather love in order to be the true hero of the world. In this unconventional world, love doesn’t come solely from aiding denizens but also from helping monsters, so the protagonist needs to catch the souls of the monsters rather than kill them. This twist is something welcome, making Moon a special journey. Containing a vast array of bizarre moments, the surprising story provides players with plenty of amazement.

The locales and characters initially come across as a standard RPG assortment, yet the parody made out of them and their curious stories and interests make them highly puzzling and different from what players usually find. The eccentric cast with strange daily routines and funny secrets feels more akin to real life than to conventional fantastic stories, which makes the game feel genuine. Players who venturing on this journey are going to see very strange things happening constantly and should prepare to be both amazed and terrified. Humor is present throughout and is welcome every time. 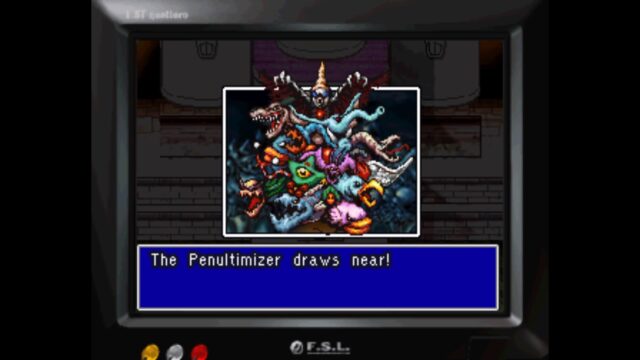 What is more climatic than a powerful penultimate boss?

Aside from the setting and the story, game also has a peculiar way of playing it. The key element of the game is exploration, which is time-limited and is affected by a calendar. Some events happen at night, others at day, and there are some that only occur on certain days of the week at a given time. There is a circular indicator on top of the screen showing the day of the week and the time of the day, as well as the remaining time available to explore, which depends on the love level of their character. Players need to return to the house and rest before their time is over since it’s game over if they do not do so. Players aren’t able to survive an entire day at the beginning, but as they collect love, they are able to continue forward for longer periods of time without the need for rest. Resting has another beneficial effect since it is also used to save the game. An extra way of saving the progress in the game would have been a helpful addition, though.

At times players might find themselves not knowing what to do or where to go because the game provides almost no guidance, so experimentation is essential, with players getting the hang of how to progress after a while. Since most things aren’t evident, investigation and testing things — such as showing an item to diverse characters or going to the same place in different hours or days — are core elements to gather love and advanc the story, which unfolds in a non-traditional way. Many things are optional, but players are encouraged to complete as many events as they can to raise their love level high enough to be able to complete the story. Some events are difficult to trigger and some puzzles can end up being frustrating since they are tough to solve. Players sometimes need to kill time to wait for an exact time, so a feature to speed up things would have been a great quality-of-life improvement.

There are two ways in which the protagonist gathers love: completing events with other characters and catching monsters’ souls. For the first one, players need to study characters’ routines and listen carefully to what they are saying or need. Some may ask to bring an item, while others will need to be encountered under certain circumstances. It is sometimes also necessary to show them other character cards or an object of interest to trigger a conversation. Some conversations will lead into mini games, which are fun and amusing most of the time. These mini games range from playing marimba with monkeys and fishing to repeating a poem or guessing the correct facial expression of a quirky character. Most games are vaguely explained, but players can try again as many times as they want until they master them.

One of the key features of Moon is the lack of a traditional battle system, which is replaced by monster catching. As the satirized hero defeats all the monsters, the protagonist needs to catch their souls to rescue them and gather their love. Players can talk to the corpses of the monsters to get a hint of how or when their spirits appear. Most of them require puzzle solving, which can be unnecessarily hard, while others can be encountered without even reading the hint. The boy only needs to touch the monsters’ souls to catch them, but some run away or hide, so it isn’t as simple as it sounds. The idea of making this paradigm shift is innovative, yet many players may miss having encounters with monsters in a more traditional way, even if they were not to kill them. 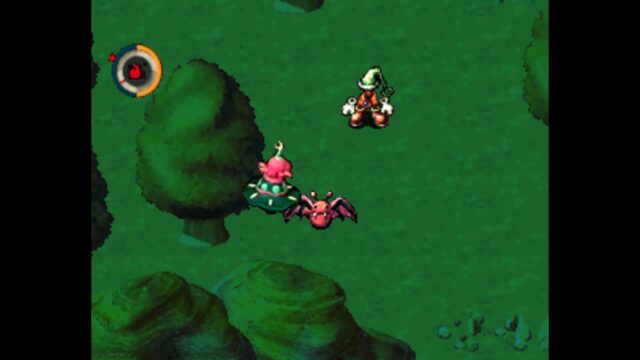 Monsters’ souls are collected by a strange creature that matches the bizarre setting.

Visually, the game is a great representative of its time. The odd art matches the mood of the game neatly, including an invisible protagonist whose clothes are the only things that can be visible. Places, characters, and monsters are all consistent and remain looking good. This unconventional game ventured into being innovative in voice acting, which uses a mix of isolated phrases in different languages with sound effects, with each character having a unique set of sounds instead of saying the words shown by the subtitles. While this type of voice acting matches the bizarre atmosphere of the game, it can turn out to be more annoying than helpful. The sound effects make every place and moment feel different but can also become stressful. The soundtrack, however, includes a good amount of tracks of excellent quality, with players able to collect music discs and play them whenever they want. The soundscape as a whole is a mixed bag; some will be pleased, while others will be turned off.

Even more than 20 years after its original release, Moon: Remix RPG Adventure remains an eccentric and refreshing experience, but its oddities may not be for everyone. Some quality-of-life improvements, such as a turbo mode to make time transcur faster when needed or more save options, would have been a great addition. Recommendations for the game come with caveats, but if nothing else it’s worthwhile checking out to see how it influenced later beloved titles such as Undertale. Moon serves as a great reflection upon the genre and is ideal for those who want something different than a traditonal RPG.