While the name may hide its roots, it won’t take most players long to discover that the 2D platformer Minoria is part of the decade-long Momodora series, and comes with the series staples: strange creatures, witches, and secret sects nestled inside dark environs. Bombservice has had ten years to refine its style, and while the series has grown, Minoria somehow feels both outdated and regrettably short.

The story starts in the neighboring kingdoms of Ramilia and Ramezia, home of church organizations. These countries have been at war with witches since witchcraft was labeled as a sin. Ramezia has been destroyed and is now controlled by evil witches enslaving its princesses. A group of nuns who are devoted to the Saints are the only hope for this rotten place filled with blood and corpses.

The player controls Sister Semilla, a nun dressed in traditional black attire who has a past as dark as her clothes, in her quest to eradicate evil threats. Sister Anna Fran is her loyal companion, and other characters also help the duo throughout the story. The pair begins their quest in Hildreth’s Cathedral, which acts as a hub connecting to all other locales into one enormous maze. Powerful enemies and veiled mysteries appear during the journey, and that’s before even considering escaped witches and kidnapped princesses that need to be rounded up. 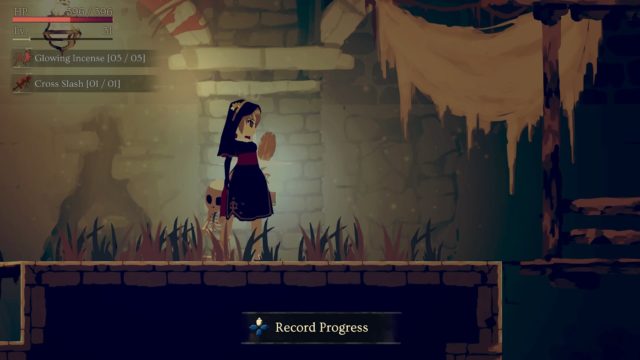 Sister Semilla inside the dark Hildreth’s Cathedral burns down heresy.

Minoria’s gameplay loop is straightforward, with the devoted duo exploring new rooms while navigating platforms and defeating enemies, always keeping an eye out for the next save spot to record progress and recover health. The maze-like dungeon sprawls in multiple directions, with various floors and locked doors that become accessible as the game progresses. Helpful items, archives with information about the characters and the story, hidden passages, deadly traps, and creepy monsters are all part of this dark kingdom. New powers and more powerful attacks are acquired as the story progresses, though some of these power-ups are hidden away and careful scouting must be undertaken to acquire them.

Even though the map doesn’t include many details, it is extremely helpful because rooms connect in many different ways and it is hard to remember where to go. Moreover, the same room may be accessible from below, above, and both sides, making the map even more indispensable. Since all the locales are connected creating one big dungeon, some locations will be visited more than once throughout the story, and the map will show the already explored areas.

Combat is fairly simple, with one button to attack, a second to parry or counterattack, and a third to fire off incenses, which act as the game’s magic spells. These extremely helpful items can be swapped out at a moment’s notice, and found or purchased throughout the game’s length. Incenses can be either active, such as healing spell, or passive, providing status boosts. While on the surface the battle system isn’t complex, players should be prepared for a challenge, as even the weakest enemies can off Sister Semilla with a small number of attacks. The nuns will need to prepare for vicious melee enemies, crafty ranged attackers, and daunting boss battles. Players suffering countless game overs can feel relieved that the game is merely ten hours long, while those longing for a lengthy campaign will be disappointed. 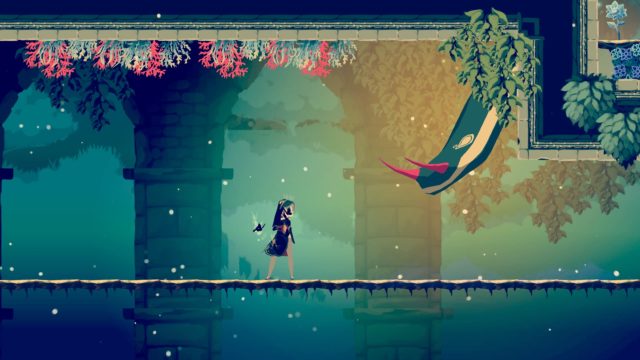 Helpful creatures that sell items can be found along the way.

The soundtrack is nothing memorable and tends to be pretty plain, yet sometimes the boss music can be a little more stimulating. This climatic music elevates the tension and helps the player to focus on these demanding battles. Apart from that, the sound effects of monsters and powers are helpful, but the most remarkable sound effect is Sister Semilla’s scream when she dies because it may be heard a lot. Dialogues are voiceless, so there isn’t anything else to strengthen the game’s soundscape.

Visually, Minoria seems a little bit behind its time. It neither includes impressive images nor extremely detailed characters or places, yet it has an interesting obscurity that prevails in most of the scenarios and allows the player to feel a characteristic mood of suspense during the whole story. In addition, every location has some distinctive features that refresh the experience of entering a new scene.

With challenging battles and obscure environments, Minoria invites players to overcome their fear of deep, dark places, lethal traps, and horrifying enemies, even if the journey is short. While the game may not always stack up to its peers in production value, those interested in delving into an action RPG crafted with equal amounts of love and nightmares could do worse than giving this one a chance.