How high is your tolerance for the original Bravely Default’s repetitive gameplay loop section? An interesting way to start a review of the updated Miitopia RPG on Switch, I know, but this is the question that I kept asking friends who asked if they’d like this title. While Miitopia eventually breaks away from doing the exact same thing over and over a few hours in the game, there are other repetitive elements wrapped around a barely-there plot to cancel this out immediately. The game can be a lot of fun as a humorous, simplistic RPG, but the slog gets real too soon and too often. There are indeed bright spots in the title, mainly those created by the characters that players assign to roles in the game, but the title far outstays its welcome.

The main story of Miitopia revolves around the evil Dark Lord. He is out there removing the faces from the inhabitants of Miitopia and placing those faces on animals and inanimate objects, turning them into evil beasts that attack anyone that draws near. The story really doesn’t ever stray far from this premise, but each kingdom players encounter has its own little problem that is directly related to the overall narrative. What makes these smaller stories memorable are the faces and names players can choose to give their party members and all the NPCs. For example in one kingdom, King Ronald McDonald needs the player’s help dealing with issues surrounding his Princess Zelda, who’s being courted by the Noble Squidward, but she’s secretly in love with SpongeBob. Much of the silly humor that is written into the game’s dialogue is amplified to a certain degree by names and faces players choose to impart to all the characters in the game. 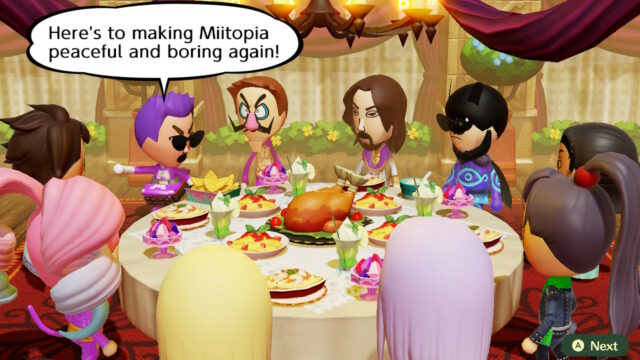 Create or import Miis from across various games and media franchises to bring the boredom back.

For those without a strong desire or ability to create the dozens of Miis needed to populate the world of Miitopia, there are plenty of options available. Nintendo has a bank of popular Miis from the 3DS days ready for players to pull from, and players can import Miis from friends. Don’t have friends with Miis available to scroll through? No problem! There are Access Key codes being shared online that allow players to search through strangers’ Mii inventories without them even having to be online. The strong Mii character creator available in-game, along with the makeup and wigs, allows for far more customization than Miis created during the Wii or 3DS eras had available to them.

While the small stories in each kingdom provide some semblance of driving force pushing the player and their party forward, the repetitive nature of simply going from point A to point B to recover someone’s stolen face grows tiresome over time. What begins as a silly romp for the first five or ten hours doesn’t quite hold up when the exact same romp is repeated in hours fifteen, twenty, and twenty-five. Even the silliness grows wearisome as characters’ dialogue doesn’t change enough to stay fresh, and the little quips uttered during journeys end up being disjointed non-sequiturs. For example, at one point a traveling companion uttered they were hungry, which prompted another to comment on the horse’s hair color, and was followed by a third saying they were considering leaving the journey. Not all dialogue is this disjointed, but the lines that suffer from this issue are particularly glaring. 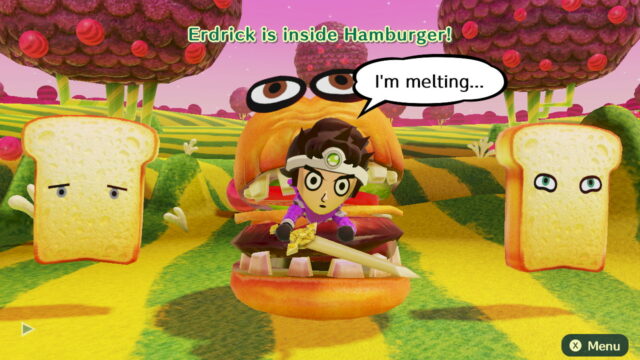 Battles can occasionally provide some hilarious moments with how the characters and enemies interact.

Travel in Miitopia involves quite literally going from point to point on an overworld map. Once an area is selected, the party walks along a path and heads to an inn to rest. Battles take place periodically during this walk, but never more than two or three per path. Once the party reaches the next inn, all HP and SP are restored and players are tasked with placing their party members in bedrooms and feeding them food collected along the way. Food can permanently increase various stats for party members, who have their favorite meals and ones that they strongly dislike. These preferences affect how much or little stats get boosted. Rooming together at inns raises friendship levels of party members, opening a great variety of benefits in battle.

Battles in Miitopia are as passive as the travel mechanics. Party members have various jobs that earn them skills as they level up. Equipment is class-dependent and highly customizable in appearance. Members wield their chosen weapons in traditional turn-based battles in which players can unfortunately control only their main character. The other party members are controlled by immutable AI, and do as they please based on their job and chosen personality. While the AI is competent and the battle difficulty laughably easy, it’s frustrating to not be in control of the majority of the characters. Frustrating also are the skills that unlock in battle based on the characters’ friendship level with each other. While it’s preferable for characters be more friendly with each other, it quickly slows the pace of combat to a crawl. In the first hours, all four party members can quickly beat down enemies, but soon each battle ends up tripling in length as each character action requires another character to make a comment on what they’re doing, move to protect or assist, or simply do something goofy. With the aforementioned ease of the vast majority of encounters, all the interplay between party members is more often than not unnecessary, and like most of jokes in the game, extremely repetitive. 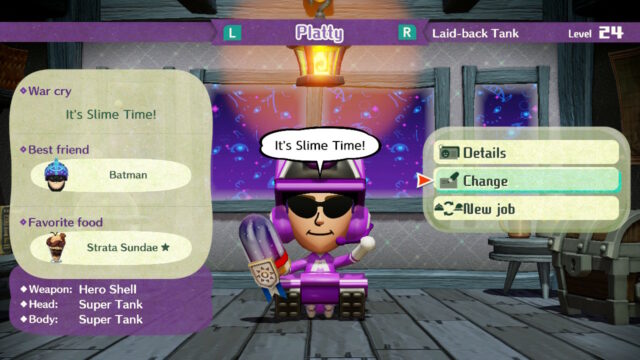 It’s one thing to act like the party’s tank, it’s another to be a tank.

Visually, the move to the Switch is a upgrade for this game. Miitopia is bright and colorful and a joy to look at. In addition to being fully customizable, Miis’ faces are quite expressive and are always reacting to what is going on around them. The soundtrack is unremarkable. The tracks suit the areas they’re used, but the repetition and length of time spent in each battle, overworld area, and inn does lead to the tunes becoming stale after a time.

While it seems a little contradictory with the criticism above and the scores below, I did really enjoy this game… for about eight hours. There is a lot of fun to be had with the class systems and the humor the game provides. Unfortunately the game lasted thrice the length I was willing to smile through and boredom set in for long stretches. I’d encourage anyone with a passing interest in this title to download the demo available on Nintendo’s eShop. It’s quite lengthy, and shows all the game offers. If that gameplay loop with almost zero deviation and zero challenge is something you’re willing to endure, it can be a relaxing break from serious RPGs.