You’re the Best of Friends

I have no interest in Miis. Sure, it’s fun to have a little avatar of yourself, but outside of games like Tomodachi Life, not a whole lot was being done with our little Mii buddies for me to gain interest. While chatting with a good friend of mine, I was encouraged to try an RPG that I would have never picked up otherwise. Enter Miitopia, an RPG for Nintendo Miis, allowing them to slay a Dark Lord, save innocent townspeople’s faces, and perhaps find romance along the way.

In the world of Miitopia, people are having their faces stolen by a Dark Lord. This Dark Lord wants to rule over Miitopia and ensure that every person is faceless. As the intrepid hero, the player’s main task is slaying the Dark Lord and restoring the lost faces of various townsfolk that are encountered. While this story doesn’t exactly sound original in any way, there’s a quirkiness to how the narrative is presented. Mainly, there’s a lot of random interactions wherein the party members will stop and have a chat, or dialogue will occur amongst companions when resting in the inn. These conversations can be secrets about other teammates, characters exchanging gifts, or even confessing their feelings for one another. Let’s just say the drama is nonstop in Miitopia. How many people can say that they stopped an epic battle between Prince Terminator and Prince Bob Ross in regard to grabbing Princess Sadness’ hand in marriage? Being able to put your friends or other Miis from the Miiverse into these character roles is easily the best part of Miitopia, as it provides a unique kind of humor for those of us who are immature.

Each party member has a unique personality trait that describes them, and these traits can take effect during the game’s turn-based combat. For example, if a character has an air-headed personality, they may forget to act during combat, while someone who is energetic may become hyperactive, meaning their damage output is doubled. Party members take action automatically, while the player can set commands for their Mii. There are many class options, such as the Pop Star who sings and dances, buffing and healing party members, or the Princess class, which offers both offensive and defensive tactics while serving tea and crumpets. As the game progresses, the player is offered more classes, and towards the end, players can swap classes, starting from scratch at level one. 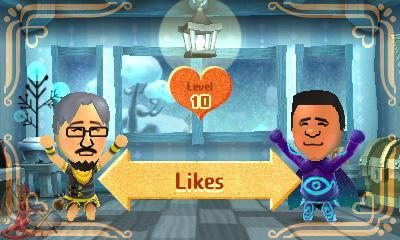 While the battle system described above is simplistic, it’s engaging as well. While it’s somewhat hands-off, there’s something about being able to throw different classes into the mix and seeing how they all work together. Composition does matter in that if you want to be successful in combat, classes need to balance each other. However, part of the fun in Miitopia is letting drama unfold, as some classes or personality types don’t mix well together, and teammates can squabble, causing unpredictable moments in battle. In most games this can be very problematic, but for Miitopia it’s part of the appeal given that Mii social interactions are at the core of the game. Oh, and saving people’s faces because the Dark Lord loves to steal faces. Sounds like a slasher film, only in Miitopia, this is presented as cute, adorable and totally not creepy at all.

However, some of the personality aspects can be troublesome during combat. Since the combat system is hands-off, there’s no way to prevent moments where Miis will sod off or fail a turn. It makes combat wildly unpredictable, and status ailments can be nasty in this regard as well. Particularly, players can only move one Mii at a time to a safe spot for them to heal from the status effect, meaning they lose their turn. Another issue is the sprinkles that are gained by saving people’s faces. While players get a lot of healing and magic sprinkles, there aren’t enough shield, hyper or life sprinkles, meaning those must be used very sparingly. It’s also easy to use up all the sprinkles during certain battles because magic points are chewed through very quickly by the player very quickly. While these are some issues, the combat in the game is easy, so these situations are rare.

Furthermore, the game’s repetitive structure can get a bit grating at times. Players will follow the same formula for each area: going into the level, fighting all the enemies, picking different directions to find either treasure or monsters, and then meeting up at an inn. At the inn, players can have conversations, spend money to dress their Miis up with appropriate equipment for their class, and play minigames if they have game tickets to spend, such as a rock-paper-scissors or spin the prize wheel. When the player is engaged with the silly story and filling in roles, Miitopia is wonderful, but in terms of exploration, the game lacks variety. 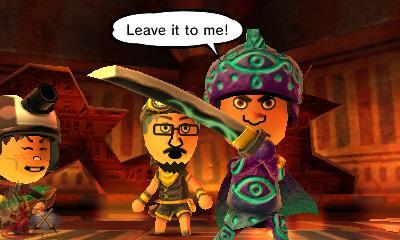 Reggie will protect his crushes at all cost.

An area that isn’t so hot is the soundtrack. It’s painfully generic and offers no songs that are interesting or catchy. It’s not offensive either, but it does nothing to get the player amped up to explore and battle, except for the Fairies’ theme, which gets players energized for… something. The visuals, however, are charming, friendly, and very colourful. There is no inch of Miitopia that isn’t swelling in big bold colours, and the areas to explore feel rich and vibrant. It doesn’t push the 3DS’ graphical limitations, but it is pleasing to the eye.

For a game about Miis, Miitopia is surprisingly meaty in content. While the main game will take about thirty hours to complete, there’s an even larger post-game that offers tons of new interactions, hidden job classes, and more areas to explore and quest in, and it’s all enjoyable. With such simple mechanics and style, it’s crazy to think how addictive and surprisingly entertaining Miitopia is. While it does have its flaws of being repetitive, I found myself constantly picking it up every night before bed and just powering through sections at a time because it was just a blast to play. Miitopia isn’t going to turn heads, nor grab the hardcore RPGamer crowd, but it’s a fun little romp for those who want a much more compact and simple RPG experience.