I’m Coming Down Fast but I’m Miles Above You

Once more have I plunged into the world of Idea Factory, and found in the form of Mary Skelter: Nightmares a game that succeeds in upholding the company’s tradition of throwing concepts at the wall without stopping to see the result. It’s an improvement over Agarest Wars, but that isn’t enough to make a game of high quality. Having party members able to lick blood off of each other in battle is unique, it’s true. Maybe for someone else that feature in and of itself will make for a worthwhile game, but for me it didn’t, especially when a glitch made reaching the conclusion an enormous ordeal.

Jack and Alice are imprisoned residents of the Jail, a massive underground facility that specializes in senseless torture of its inhabitants. One day Red Riding Hood appears to free Alice, and she refuses to leave without taking Jack along. Their flight takes them to Liberation City, where other people have been living after their freedom from the Jail was achieved. Alice and Jack eventually agree to participate in the goal of escaping to the surface, a task that can only be accomplished after thorough exploration of numerous parts within the Jail. Their search is specifically for Cores, objects nestled deep within the Jail that provoke mutation of the surroundings upon destruction. Alice, Jack, and Red Riding Hood join a team with other eponymous fairy tale maidens including Sleeping Beauty, Cinderella, Rapunzel, Thumbelina and more.

An intriguing setting isn’t given adequate development by Mary Skelter, which contains plenty of filler sequences and fan service-oriented scenes. A landscape of claustrophobic desperation akin to what the Jail presents seems an unlikely place to find silly scenes in which Jack must gingerly extricate himself while ladies are in states of undress, but these are nevertheless encountered. After establishing the world of Mary Skelter, further relevant information is doled out very slowly. The eventual climax had the potential to be tantalizingly gripping, but isn’t presented in an effective manner. To add further frustration, obtaining the proper finale requires complying with some rather arcane steps that make having a guide a very good idea. While not constantly present, a fair number of typos also slipped into the localization text. 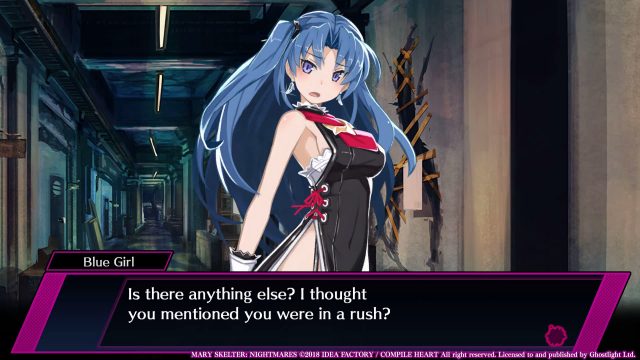 When I think of Cinderella, kung fu fighting is definitely the first characteristic in my mind.

Playing through Mary Skelter is accomplished via first-person dungeon exploration, though with a bothersome random encounter rate. Combat takes place using turn-based principles with a visible order meter to intuit which participant will act next. A unique mechanic appears in the form of blood, which is splattered onto the ladies during fights. They can either lick the blood from each other for beneficial effects or leave it on to activate Blood Skelter mode, in which access to normally-unavailable abilities is granted and hitting enemy elemental weaknesses regenerates some stamina. Taking damage from enemies corrupts the blood spatters, and a completely corrupted combatant will be uncontrollable when entering Blood Skelter.

Jack’s presence in combat is also unusual, in that he cannot directly attack or defend. He can use an item, take a hit in place of one of the party members doing the fighting, or he can squirt his blood onto someone in the team to negate corruption. It’s an ostensibly interesting mechanic, but most of the time Jack has nothing to contribute due to how effective the ladies are at killing things quickly. Adversaries tend to hit fairly hard, but replenishment means are so frequent that there is no reason not to slam them with everything the party has in an effort to end things in a hurry. Difficulty can be adjusted at any time and affects what rewards are bequeathed by enemies, but the efficiency gain from being able to kill everything faster is a worthwhile reason not to tamper with it much.  Party members at least have access to multiple classes so the player can optimize how effective they are in combat. 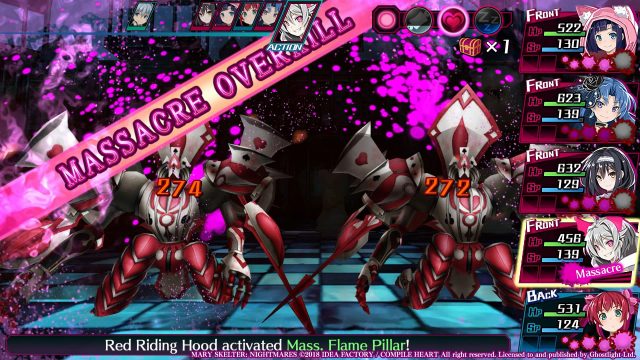 Is it nice to have fairy tale maidens gruesomely massacring creatures? The game never ponders it, so why should you?

Most aspects of combat and dungeon exploration are governed by standard turn-based rules, but certain obstacles inflict damage upon the party in real time and require quick reactions to avoid. Each member of the party also has an action that affects the environment which also takes place in real time, such as firing arrows or running swiftly to circumvent crumbling floor tiles. Visible enemy encounters are found in unavoidable locations throughout the dungeons, though unfortunately none of the party action abilities can be used to begin these fights with an advantage. The various portions of exploration that depend upon prompt reactions don’t mesh well with first-person dungeon movement, especially not when random battles intercede and distract from whatever task needs to be accomplished.

Somewhat reminiscent of the FOEs in Etrian Odyssey are Nightmares that move about dungeons. These creatures are frustrating due to the sudden abandonment of time to think when they appear. A Nightmare pursuing the party removes the ability to open the menu, and it will continue to creep closer in real time if a random assault takes place. Nightmares cannot be killed until the Core of a dungeon has been eliminated, and will only be knocked down for a short time if engaged beforehand. Just engaging them is a trial because these adversaries also have a real-time combat component, with pauses for thought by the player being met by the Nightmare’s turn advancing. Even worse is a special type of Nightmare encounter in which it grows to a gigantic size and must be fought multiple times on a map the player has never been to before, though this is fortunately not a common scenario.

Dungeon navigation is hindered somewhat by the in-game map’s failure to mark many of the spots at which party members can affect the surroundings, some of which are mandatory in order to progress. Since the map does denote a number of features by default, the omissions on its display must have been a deliberate design choice. It may be asking too much for Idea Factory to notice how effective Etrian Odyssey cartography is, but the lack of helpful amenities is still noticeable. 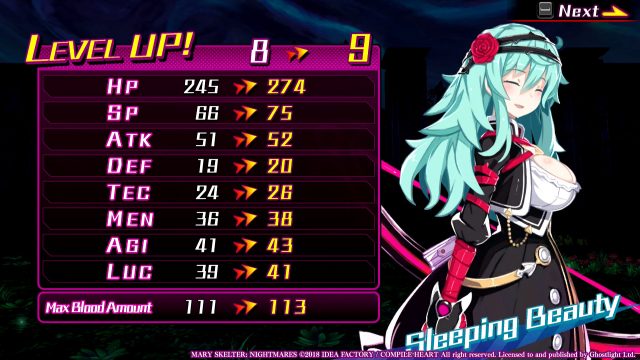 Sleeping Beauty isn’t much of a conversationalist. She has a profound narcolepsy problem.

Director Atsushi Ishizuka apparently wanted to randomize inventory to a considerable degree, because the only shop accessible in town has a paltry selection. Getting new things depends upon what can be harvested while exploring the dungeon, or on randomly encountering merchants who wander around. The wares offered by these merchants vary based upon where they are found, with selections changing for no comprehensible reason. Materials on sale in the last dungeon area include a generous quantity of what has been long outmoded, and many merchants have a ridiculously long list of presents for no other purpose than to increase the ladies’ affection toward Jack.

Affection is granted considerably more attention by the game than it warrants, considering its only concrete effects are to give the ladies a few new special moves and some brief ending scenes. Well over one hundred items that exist only to raise affection with the cast will often be dumped into the inventory through exploration, including such questionable contributions as torn pillows, damaged canteens, sturdy sandbags, boring comic books, abstract paintings, cute insectivores, and moody paper lamps. Since each woman is just as happy to receive something thirty times as once, unloading this flotsam to maximize affection is a simple task.

Dungeon visuals are rather interesting to behold, although most of them have no impact upon exploration, even things such as mobile furniture and shaking corpses. A peculiar decision was made to employ palette swaps of enemies within the same dungeon that have slightly different statistics but exactly the same affinities, meaning that there is no difference when dealing with them. Outside of the dungeons most scenes are depicted with a few character pose animations over static backdrops used repeatedly, which do nothing to aid story sequences. The character art is well-made but not seeing cast members actually doing what they are talking about lessens the effectiveness. 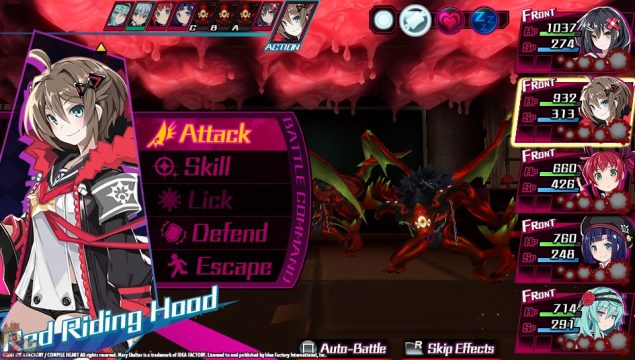 Oh no, this is the first battle of the dungeon run, leaving Red Riding Hood without any blood to lick from her fellow party members!

Some stretches of plot developments come with voice acting, though the majority do not. The performances are workmanlike at worst, and having a voice for each member of the cast helps a bit in conveying personality aspects. Other use of voices is simply annoying, as merchants in particular feel the need to say “Is that it?” after every individual transaction, not simply when exiting the storefront. Most music is unobtrusive and pleasant without becoming memorable.

I can truthfully say that Mary Skelter: Nightmares is the very first game I have ever played in which giving a woman multiple meatless pancakes demonstrably raised her affection for my character. I can also truthfully say that it exceeds the level of quality seen in my previous experiences with Idea Factory and Compile Heart.  That comes with the significant caveat of a point where the game refused to recognize I had the critical item for progression, until after about 150 tries it finally allowed me through.  Cranking the quality up from completely wretched to only somewhat wretched isn’t all that much of an accomplishment though, and leaves me no wiser than before about how these companies remain in business. 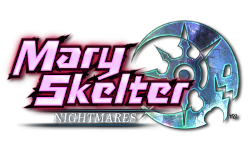