Sticks and Stones May Break My Bones

Whilst solving problems with physical confrontations is one of the most common characteristics of RPGs, indie studio Twelve Tiles shows it need not be the only way with Last Word. With the exception of a fine wine thrown in anger, violence has been moved from the equation. Instead, all conflicts are resolved through the force of one’s words. It’s not a very big or deep game — the ending is easily reachable in two to three hours — and the conversation/battle system starts to wear a bit thin quite quickly, but Last Word fills those hours with a pretty interesting set of mysteries to uncover.

Last Word takes place within the mansion of the esteemed Professor Chet Chatters, in the nation of St. Lauden. This is a world, seemingly modelled around Europe in the early 1900s, where the elite conversationalists and houses have great influence over matters of governance. Those that manage to get the last word into any debate find themselves holding immense powers of suggestion over the other participants. The Professor has gathered a small group of this elite, including the player character Whitty Gawship, in order to show off and test his new invention, which supposedly allows him to get the final say in every conversation. This machine, which appears to the guests as a giant mouth on the wall, amusingly works in the simplest way possible: as a one-way microphone that physically prevents the Professor from hearing any rebuttals. 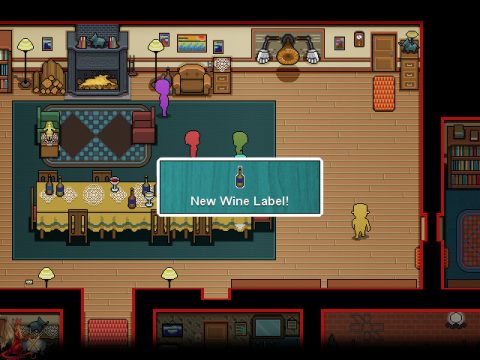 Lots of wine is consumed, which I can certainly get behind.

Progressing the game’s story, which involves investigating the Professor’s machine and the background of those invited to the party, requires unlocking conservation topics. This can be done either by talking to the other guests about those topics, finding an item in the mansion, or winning conversational battles. The way to progress might not be particularly obvious sometimes, but fortunately the trusted method of “try everything” is a perfectly viable, and not at all off-putting, tactic here thanks to the small setting and enjoyable writing. The narrative holds up well for the duration of the game, but small scope is a slight disappointment, as there’s a feeling the story could have ended up with rather more intrigue and received further development to the setting and characters, which feel a bit flat by the end despite their likability. There are several optional things to do in the game, such as the diary of Whitty’s ally Seymour and the search for various wine bottles around the mansion, that add some nice touches here and there, but still leaves the feeling the story isn’t as complete as it could’ve been.

The turn-based conservational battles feature three main gauges. The first two measure the two combatants’ power and tact, while the third is a shared gauge that is the ultimate determinant for victory. This is done through manipulation of the power and tact totals by selecting the direction to take the conservation. Power is gained by using disruptive phrases, tact is gained by using submissive phrases but requires power, while aggressive phrases move the victory gauge but need tact in order to do so. Each of the phrase types has three levels to choose from. However, simply choosing the highest level each time is usually a poor plan. Combatants have indicators of their mental state, which can be altered through choosing phrase levels with certain shapes. Selecting the shape that is effective over the shape the opponent took in their turn causes their mental state to deteriorate, which in turn makes aggressive phrases considerably more effective and ultimately leads to victory.

A number of passive skills also come into play throughout the conservation. Skills are gained by spending experience points earned from previous battles or from finding the various optional scenes or items. These range from gaining some extra power whenever the victory marker lands on certain points to gaining a one-time reprieve from the point of the defeat. Experience points are also used as the game’s levelling mechanic, although all this does is determine where the victory gauge starts out, with each level difference between the characters moving the marker one space in favour of the more powerful participant. The battle system features some neat ideas and is engaging to play around with for a time with a nice back-and-forth structure, but the limited tactical variation and small number of opponents means it starts to wear thin fairly quickly. 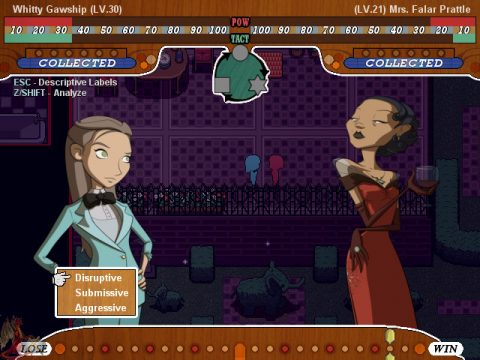 The UI isn’t the greatest, but is straightforward enough. The biggest annoyance comes when trying to go through multiple conversation topics at a time, as players have to step out of the interaction options with each character in order to change the topic and then go back in with the new topic set. Last Word‘s sprite-based visuals work nicely, with the use of colour-coded silhouettes — plus a few little defining details such as Whitty’s bow tie — helping to differentiate the characters and the nature of the powerful houses of St. Lauden, and the different lighting effects on each room helps to add some atmosphere to the mansion. The decent selection of music on offer provides a good if forgettable backdrop, while voice acting is limited to just some general reaction noises.

The fact that I was left wanting more from the game’s narrative is credit to the interesting setting, decent writing for what is present, and the mystery solving aspect of Last Word. It’s also refreshing to see another game trying to mix up how it handles battles and conflict, even if this resulting system didn’t end up as strong as one might’ve hoped for. Last Word is a game I would recommend to try out even just for novelty purposes; it’s certainly an interesting enough experience to while away an afternoon or evening. 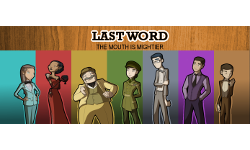