In Space, Nobody Can Hear You Git Gud

Developer Cradle Games had to go no further than announce its inspirations for action RPG Hellpoint to instantly bring me on board. Any new property that lists games like Dark Souls and Dead Space as its muses and takes pointers from movies like Event Horizon and Hellraiser has my undivided attention. But do all of those inspirations shine through in satisfying ways? The answer is more yes than no, though the game leans more heavily toward From Software’s well-worn action combat formula than Visceral Games’ brand of sci-fi horror. The end result is a highly entertaining and challenging take on a modern classic, with both innovations and rough edges alike.

The game takes place on the Irid Novo, a derelict space station in close orbit around a black hole somewhere in the deep reaches of space. Taking on the role of a Spawn, a cloned being newly awakened from a cryosleep pod, players are given free reign to explore the station. Interfacing with a computer terminal after proving their worth against the game’s first boss, they make contact with the Author, one of the ship’s AIs, and the one who awakened the Spawn. The Author sets players the nebulous task of gathering data, and in terms of goals and motivations, that’s really all the game offers. Each new enemy type encountered, each boss defeated, and each interdimensional breach stabilized — Hellpoint’s version of bonfire checkpoints — adds on to the running percentage count of data collected.

Even though this percentage total gives players feedback on their progress, the game offers precious little direction to go off. Irid Novo is immense, with myriad pathways, shortcuts, and both locked and hidden doors connecting its individual environments. Even a singular area can have the player’s head spinning trying to keep track of where to go, where they’ve already gone, where an important landmark was, and so on; with no in-game map available whatsoever, players have to rely on their sense of direction to stay oriented. The station is also highly non-linear, with multiple paths forward presenting themselves to the player at times, some of which which will eventually connect back on each other or peter out into a dead end. There are even several copies of keys to find to help keep unfair frustration to a minimum. The station’s scale is impressively immense, but this becomes a drawback when overlooking a key somewhere along the way, since being able to find it again can be a matter of “needle, haystack”. 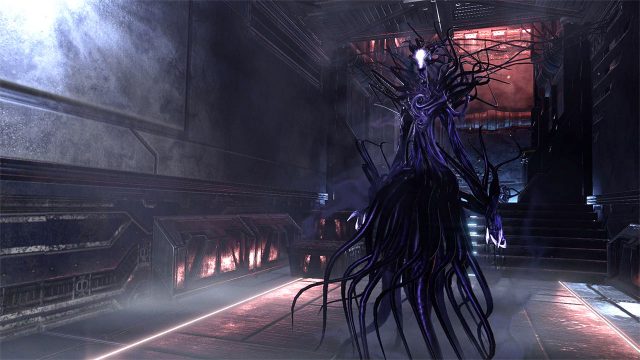 It doesn’t take long for bosses to reappear as common, if powerful, enemies.

Luckily, the journey is highly satisfying, as exploring the station is at all times a fascinating experience in and of itself. From the Embassy designed to receive visitors, delegates, and other off-station personalities, to the Observation Deck with its grand space vistas, and places like the dilapidated “downtown” district or the crumbling catwalks perilously bolted on beneath the station proper, each area is a labyrinthine maze of twisted passageways that can hide useful items, lethal gear, or bloodthirsty enemies. The atmosphere is as fascinating as it is deadly, and it’s further brought to life by sharp visuals that offer an impressive attention to detail and a great sound mix that’s generally dominated by unnerving environmental sounds and a hushed, oppressive silence that really sets the ears on edge. Several monster designs fit into that body horror category, such as a large severed hand scurrying along on its fingers. Though that’s fine and good, a bit more enemy types would have been welcome, as each area generally features a slim variety and just about each regular boss soon becomes an enemy in regular rotation. Enemy sound design is quite unnerving, however, with the grisly shrieking of foes being a hair-raising element of any encounter.

As players advance, a narrative of sorts begins to reveal itself. Hellpoint is comparatively liberal about doling out pieces of story and world-building, though the meaning behind it all is still pretty obfuscated. A few historical logs point to some catastrophic events that have befallen humanity in the distant past, and the rise of artificial life. Though all human life aboard the station has perished, a number of human consciousnesses trapped as readable data can be found and interacted with. The clues point to the station having been home to unspeakable experiments over the years, leading to monstrosities emerging onto it through rifts in space. Unfortunately, it’s all a little bare-bones, and adds precious little to help flesh out the world.

But the moment-to-moment gameplay doesn’t concern itself with narrative or world-building, anyway. Combat is quite similar to other Souls-like action RPGs, with some omissions and a few new additions. Backstabs are entirely absent, though a forgiving block-based stun system is in its place. The core of combat revolves around chaining together normal and heavy attacks, with some stats devoted to the handling of ranged weapons. On the whole, combat is fun and satisfying, though doesn’t often transcend the block-evade-attack blueprint. There’s even a bit of simple platforming in areas like the underside of the station’s hull that works reasonably well, though this subgenre’s curse of forced precise jumping does rear its head from time to time. 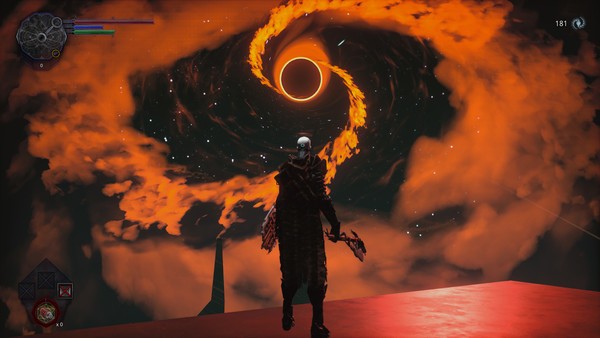 The conceit of being set on a station orbiting a black hole is interesting and even plays out in creative ways during gameplay.

An interesting element of Hellpoint comes from the station’s proximity to a black hole. Once per orbit, the station and the black hole line up perfectly, represented by an on-screen indicator, affecting the demonic forces on board. During this time, enemies may grow stronger or award better prizes upon defeat, while enemy spawn positions can change without warning. There are also two phases during each orbit when the station passes through the black hole’s plasma accretion disks, causing additional events to occur. A handful of areas on the station are only accessible at these times, while other areas will suddenly become temporary challenge zones; willfully transgressing into one of these will trigger a horde attack against waves of enemies, granting unique rewards upon completion. These are neat ideas for those looking for the challenge, though they are generally easily avoided, with the exception of one notable area where a challenging zone spawned directly en route to a boss location, forcing either unwanted combat or a tedious wait time until it expired.

Sprinkled among Hellpoint’s myriad secrets are several optional boss encounters against imposing cosmic beings, as well as optional quests that are easy to miss and even easier to abandon. As characters increase in level and slay these imposing optional bosses, many enemies all across the station will be replaced with other, stronger ones, so that repeat visits to previous zones still serve up a number of nasty surprises. Bosses on the whole are generally quite tough, with some requiring many attempts to best. On more than one occasion a relatively easy zone filled with small-fry minions was capped off by an extremely challenging boss fight that felt incongruous to what led up to it. This is exacerbated by a few bosses whose attacks are so fast the controls struggle to smoothly keep up with them, while some are too large to play well with the camera lock-on function, making precise dodging difficult. While besting these foes is as satisfying as can be expected, they also serve as the combat system’s most troubling moments.

Hellpoint clearly does take inspirations from multiple other works, but some of these influences don’t go far beyond the superficial. The sci-fi horror vibe is appreciated, but for my taste the game doesn’t lean far enough into the dread and scares this could afford. Instead, it adheres fairly strictly to that familiar Souls-like quality, though it does admittedly do so successfully. Environments and the thrill of exploring them shine as a particular highlight, while combat is, if nothing else, serviceable. Some missed opportunities in world-building and being a bit too open-ended are among the few blemishes present, making Hellpoint a solid recommendation for those who aren’t afraid to try something a bit darker.