In 2009, Half-Minute Hero was the RPGamer Editor’s Choice for best RPG on the PSP and for good reason. The game is not your typical RPG, as its main mode Hero 30 plays more like a puzzle game wrapped in a retro RPG shell. Now, Half-Minute Hero Super Mega Neo Climax for Xbox Live Arcade is a scaled down version of the original that offers a few new additions. Those who played through all of the PSP game will miss little by passing on this, but it’s still a fun game that comes highly recommended.

Just like the PSP version, the Hero 30 mode is the meat of the game, offering over thirty RPG quests to complete. In each of these missions players will have thirty seconds to grind their way through a stage, upgrading equipment and completing quests on the way to defeating the boss. To help with this time limit, the Time Goddess offers the option to reset the countdown for a modest fee that increases with each use. It’s a simple concept and fun twist on RPG norms, and it works amazingly well. The biggest hindrance of the XBLA version is that the Xbox 360 controller is very imprecise for a game with limited four-way movement. The left stick is better for 3D movement and the D-pad is unresponsive, making the speedy movements that this game requires more awkward than they should be. 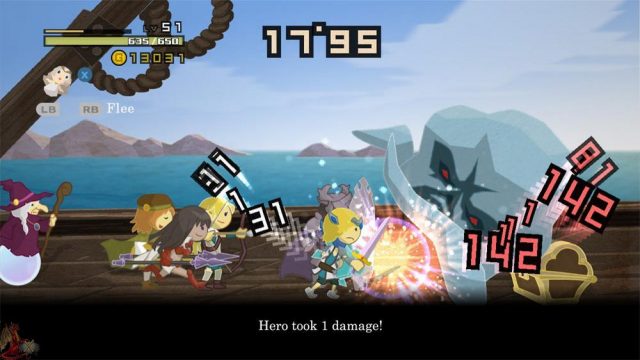 While speed is the focus of Half-Minute Hero, each stage offers more than just a quick path to the end. There are achievement-style titles obtainable in each stage, giving players a reason to try to beat quests multiple times using different methods. There are also extra paths that become available based on how specific stages are completed. For example, letting a forest burn in one stage versus putting out the fire will result in a branching quest path. Half-Minute Hero is not a game about following a story from beginning to end with gameplay merely serving as the method by which to do this. No, this title is all about gameplay and it excels in this still, even if the controls are not as precise as in the earlier release.

In the original Half-Minute Hero there were additional modes beyond Hero 30. Evil Lord 30 was a real-time strategy game, Princess 30 was a shoot ’em up, and Knight 30 was an action game. Playing through these other modes it was hard not to wish they used the RPG style of Hero 30, as they were not as fleshed out. In Super Mega Neo Climax, those who wanted that now get their wish, but it is a hollow victory. Evil Lord 30, Princess 30, and Knight 30 have all been changed to the RPG style, but they have each been reduced from a ten mission set to a single quest. While these other modes might not have been up to par with Hero 30, they did add a bit of variety that has now been gutted and replaced with a mere fraction was the content that was once there. 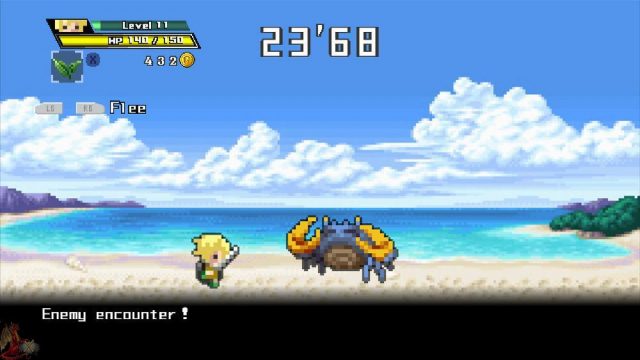 You can defeat these without use of a special shampoo.

There are a couple new additions to this XBLA release of Half-Minute Hero. Super Mega Neo Climax sports a new hand drawn look, as well as the option of using the original 8-bit style. The new mode looks pretty, but doesn’t really set the mood of the game as well as the retro style. The game now offers a multiplayer mode over XBL where players can compete against each other to see who can defeat the evil lord the quickest. In this mode, players have to share resources, as items are limited to one each. This also brings into play an odd cooperation aspect, as players will have to work together to reset time and complete objectives or time will run out and everyone will lose. So like many other multiplayer experiences, enjoyment will greatly depend on others.

So while Half-Minute Hero Super Mega Neo Climax offers some new features, they don’t make for a brand new experience. That said, the Hero 30 mode, which is the heart of the game, is still in place and as great as ever. So while the PSP version remains the better of the two versions, if you don’t own a PSP, there is no reason to shun the XBLA release. The main content of the game is still great, even if this version is scaled down to a mere handful of hours. It’s really the hindrance of the 360 controller that is the greatest offender. Despite that, the gameplay is still fast, fun, and great for multiple playthroughs. In a time where most games are quickly tossed on the shelf after being completed, especially RPGs, replayability is a feature not given much thought, but Half-Minute Hero moves it beyond a meaningless bullet point. Half-Minute Hero is great for anyone who loves fun and should not be missed, but do yourself a favor and try the PSP version first if you can.