Some games are destined to be RPG classics, remembered fondly by fans at the at the peak of perfection. Some are born to be half-arsed carbon copies of games from yesteryear that attempt to bank on nostalgia because it’s the cool thing to do. Kemco is an interesting, if questionable developer, creating 16-bit RPGs for the sake of trying to recapture what makes that particular era of gaming so profound. What Kemco fails to understand is that there is a difference between banking on 16-bit nostalgia, and comprehending what it was that made those games great in the first place. Grinsia for the Nintendo 3DS is a great example of what it means to be 16-bit, generic, and broken.

Grinsia tells the tale of an archeologist family on the hunt for fantastical treasures only to be thrust into “ye olde save the world because of artifact” plotline. There’s nothing interesting to expand on in terms of plot, the characters are tropes and stereotypes that gamers have seen before, and the dialogue is painfully inane without expressing that this story in some way should be interesting or thoughtful. Every aspect of the story, characters and dialogue is completely forgettable, and even Nicalis’ attempt at localization proved futile because it couldn’t even spice up this drab attempt at storytelling. Considering that this bland attempt at narrative is supposedly what we are used to in the 16-bit era, perhaps then we can say that Grinsia hit it out of the ball park, however.

Since turn-based combat is also a staple of 16-bit gaming, we can at least say Kemco nailed it. Everyone loves a turn-based system that has an attack, defend, escape, and auto battle command, right? Or how about equipping a relic that grants a generic EX Skill that can cause health to regenerate or volcanos to explode? There’s not a lot to get excited for in Grinsia‘s combat, but sarcasm aside, this tried and true combat system is serviceable for the most part, though the high encounter rate gets to be excessive as the game moves along. Credit should be given in that game overs are not a punishment, as the player will be warped to the last town they visited and can collect any lost experience by picking it up from where they left off in the dungeon. Since battles are about the only thing the players will encounter, being able to reclaim experience is a nice treat. 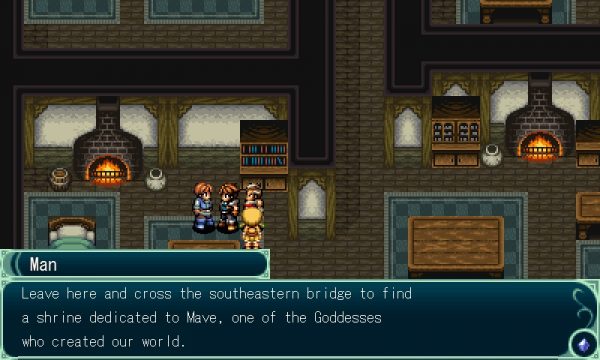 What isn’t a delight, however, is the playtesting, or lack thereof that went into Grinsia. Within the twenty-two hours spent on this monotonous pile, the game froze over sixty times, once during the game’s credits. There’s no pattern or rhyme as to when one can anticipate this issue, as freezing can happen while shopping, battling, exploring, heck, even during saving. On a good session, I was able to get about forty-five minutes of play before the game crashed, and on a bad day it would happen every five to ten minutes. This means frequent saving, and the constant anticipation that at some point the game is going to crash and whatever progress made will be lost. This type of excessive freezing is unacceptable on all accounts and the one patch that has been put out actually causes the game to freeze more than without. It’s embarrassing in every sense of the word that the iOS and Android versions of Grinsia run far more smoothly than this shoddy 3DS port.

Outside of the shabby port job, Grinsia rides a wave of genericness in every sense of the word. There’s no hook, line or sinker to keep people playing this game because it’s every old school RPG people have played before, just blandly done. Generic can be done right if it at least has personality to back it up, but Grinsia on a whole feels static and bored with itself. Kemco games are known for being great time wasters, yet Grinsia offers nothing to even fit into that category. Generic does not equal nostalgia, and what little the game attempts to capture is squandered on the fact that everything within the game’s makeup is lazy and uninspired. 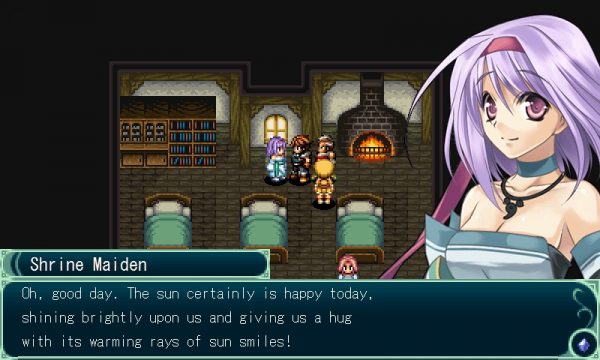 Visually, RPGamers have seen games like Grinsia before: simplistic and clean 16-bit graphics. There’s nothing special, but there’s nothing detrimental either. Considering the feel the game is attempting to evoke, the graphics and dungeon designs work well and are fairly harmless. There is quite a large amount of palette swapping among enemies, but that is the least of the game’s problems. The same can be said for the game’s soundtrack, which again, though uninspired, at least fits the bill of nostalgia to a T. In fact, the music is even decent at times, but there’s only a small handful of tracks so the repetition does become grating after a while.

At the end of the day, Kemco games are all alike. Once you’ve played one, you get the gist of how the developer is able to recycle so much with minimal effort. If you’re going to rip-off the classics, at least be competent about it, which Grinsia fails at with flying colours. For ten dollars you’ll be treated to a game that glitches on a whim, has a snoozetaticular storyline, and thinks it’s on par with the 16-bit greats. But really, it’s the kid in the corner who copies your homework in crayon seeking praise for its “efforts.” Yes, some are born great, but others are born half-assed to make a quick buck.