Three Guys, a Girl, and a Smiley Face

At the close of Golden Sun: The Lost Age, many questions remained in the minds of those who followed Isaac and Felix’s separate adventures through Weyard. What happened to Alex? Who is the Wise One? And just what, exactly, is the Golden Sun anyways? Golden Sun: Dark Dawn, the long awaited new chapter in the series, answers many of these, while at the same time bringing a whole slew of new questions to the table.

Thirty years have passed since Isaac, Felix, and their allies lit the beacon on the Mars Lighthouse and restored alchemy to Weyard. The event that followed, known as the Golden Sun, completely destroyed the village of Vale and left Weyard in a very different state. The scattered villages have grown into nations, mysterious phenomena called Psynergy Vortexes have been wreaking havoc and devastation, and Isaac and Garet have been living with their sons, Matthew and Tyrell, on a plateau overlooking Sol Sanctum, keeping a vigilant eye on the world at large. When, in a fit of hubris and stupidity, Tyrell damages an extremely valuable device designed by their old friend Ivan, Isaac and Garet send their sons, along with Ivan’s daughter Karis, to retrieve an item required to repair it. While it certainly doesn’t have the grand beginnings of the original Golden Sun saga, the adventure that Matthew and his friends embark on ends up being far more than they bargained for and takes them across the entire Angara continent. It’s also very clearly the start of something much grander. The game concludes not so much with a cliffhanger, but with several loose plot threads and a much larger threat looming ahead.

While Golden Sun: Dark Dawn provides a self-contained story with new characters, the plot does rely fairly heavily on the events of the previous games. Luckily, Dark Dawn does a terrific job of catching new players up to speed. In addition to a solid prologue sequence at the beginning of the game, a thorough encyclopedia on characters and places throughout the game can be accessed in the midst of dialogue sequences (displaying on the top screen), allowing players to catch up right in the middle of an event. There are also a series of five “Sun Saga” books that can be found throughout the game which provide a brief retelling of the original events in a storybook format.

Unfortunately, the plot of Dark Dawn simply doesn’t live up to its predecessors. The story is solid all around, but the game introduces an incredible number of completely irrelevant keywords that add nothing but needless complications to an otherwise elegantly simple mythology. The ancient people that built the lighthouses, among other devices, are given not just one, but three separate names, one of which is simply an alternate name for the adepts of previous games. Despite this, the game does a remarkable job of keeping the various elements of its world cohesive and understandable. The localization also leaves a bit to be desired; the dialogue flows well enough, but generally ends up being surprisingly bland. The game is also incredibly wordy, and conversations often drag on longer than they need to. More than anything, the text just doesn’t have the polish seen in other recent Nintendo titles, such as January’s Glory of Heracles. 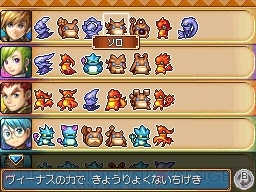 More Djinn! I must have more Djinn!

Luckily, the core Golden Sun gameplay that made the original Game Boy Advance titles so popular is as great as it ever was. While some may have had reservations about how well it would transition to 3D, players can rest assured that not only was it done well, but it was done better. The one thing that made the original titles so memorable were the incredibly complex environmental puzzles, requiring players to use dozens of different non-combat psynergy skills to manipulate objects and clear paths to new areas. This remains the primary focus of Dark Dawn, but some things have been changed to provide a more intuitive experience. Specifically, psynergy no longer affects only the tile directly in front of you; instead, each skill has a set radius of effect, which allows the environment to be manipulated in ways that would have been impossible in the Game Boy Advance titles.

Though the puzzles in Golden Sun: Dark Dawn are a bit easier to solve than the ones seen in The Lost Age, they’re still challenging enough to provide plenty of entertainment. There are significantly more Djinn scattered across the world to find than previously, and the puzzles standing in the way of getting these fellows offer plenty of additional brain teasers. Certain dungeons also stand out as particularly clever; one in particular requires the player to not only lower and raise the level of water to proceed, but also freeze it in order to reach different areas. The level design is truly impressive, which shouldn’t be surprising for long-time series fans.

The combat in Dark Dawn remains essentially unchanged from the previous games. It’s a simple, turn-based system where players choose attacks for each character and they’re carried out based on the agility stat. Combat is generally extremely easy, and aside from a few boss fights, most players aren’t likely to run into any real difficulties. Luckily, it’s also extremely fast and stays out of the way most of the time. Normal encounters take as little as ten seconds to complete, and encounters disappear entirely in most puzzle-heavy areas.

Golden Sun‘s combat shines mostly thanks to its Djinn, which provide an incredibly robust class system that’s almost a puzzle in and of itself. Essentially there are four different types of Djinn associated with the elements earth, wind, water, and fire. Each character can have up to nine Djinn set to them at a time, and by setting Djinn of different elements, characters change to different classes, with different stats and different psynergy at their disposal. Equipping Matthew with nine Venus (earth) Djinn will make him a Slayer, but equip him with just two Venus Djinn and seven Mars (fire) Djinn and he becomes a Chaos Lord. Five Jupiter (wind) Djinn and four Mars (fire) Djinn make him a Disciple, but four Jupiter Djinn and five Mars Djinn make him a Ronin. There are an incredible number of possibilities, but since there are an equal number of each type of Djinn, getting each character into an optimal class can require a fair bit of experimenting, an endeavor that can be almost as addictive as the puzzles themselves. 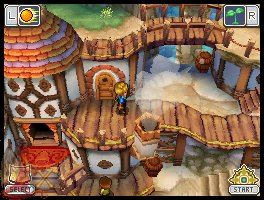 Nobody in their right mind would create towns this hard to navigate.

Djinn serve another purpose that adds another facet to the combat system. Each individual Djinn has a special ability that can be used at any time by the character it’s set to. Using that ability unsets the Djinn, which can cause the character’s class to change, but makes a new ability available: summoning. Once the right number of Djinn are unset, they can be used to summon powerful creatures and gods, dealing tremendous amounts of damage. After being used for summoning, Djinn enter a standby mode, and as turns pass by in combat, they automatically set themselves to their original character. At this point, class bonuses are restored and the Djinn can be used again.

Visually, Golden Sun: Dark Dawn is one of the nicer looking games on the DS, easily comparable to this year’s other visual feast, Dragon Quest IX. In particular, the environments sport a terrific amount of detail. The world map is particularly notable, as it’s a huge step up from the horrendously ugly world map seen in the original two games. Like the original titles, characters express themselves through emoticons that pop up over their heads. Battle graphics, like with the original games, provide a step up in the quality of the 3D visuals, but it’s less impressive on the DS than it was on the GBA.

One of Dark Dawn‘s more disappointing elements is the audio. The soundtrack, composed by Motoi Sakuraba, is not nearly as impressive as previous games in the series. The recurring theme tracks from the older games are still as fantastic as they were on the GBA, but the new tracks are not among his best work. The sound effects have also failed to improve, and most of them are recycled from the GBA titles. Most noticeable is the warbling sound characters make when they speak which are the same effects used previously, though those who found that particular feature irritating will be happy to know that it can be turned off.

All things considered, Dark Dawn is still the game series fans have been waiting seven years for. It’s faithful to its origins, and the gameplay is as fantastic today as it was back then. Although it doesn’t quite live up to The Lost Age‘s legacy, it’s easily comparable to the original title. The game should take most players roughly thirty hours to complete, and there’s a smattering of optional end-game content to add additional time to that, including several difficult boss fights. With plenty of plot threads left open, and an ending that suggests a sequel, hopefully we haven’t seen the last of Golden Sun.