There can be no doubt that Namco Bandai’s Gods Eater Burst is heavily influenced by Capcom’s huge success with the Monster Hunter franchise. Gods Eater Burst does, however, manage to differentiate itself from simply being a clone by concentrating on story and its interesting setting. This, coupled with the well-handled battle system, gives RPGamers cause to consider the game on its own merits and not simply as a stop-gap until the next release in the Monster Hunter series.

Set on Earth around sixty years in the future, Gods Eater Burst sees players joining in the struggle against strange beasts called Aragami that have been raining destruction on the planet. Put through a robust character creator, players first choose their gender as well as their clothing, hair, facial features, and even the voice that will be heard during combat. Players are then introduced to their new job as a Gods Eater (effectively anti-Aragami mercenaries: the ‘s’ being inexplicably added at some point during localization) at the Fenrir Far-East branch through a series of tutorial missions that do a good job of establishing the setting, main characters and controls. The God Arc is the tool of the trade for a Gods Eater, being a massive weapon that can freely switch between three modes; sword (and shield), gun, or devour. Players control their created character on missions against the Aragami with assistance from up to three other Gods Eaters who are usually controlled by the AI, although friends can be brought along instead using the PSP’s system link. The controls are for the most part intuitive and easy to use, although some may find the camera becomes awkward to control in gun mode.

The battles against the Aragami are certainly one of Gods Eater Burst’s strong points, featuring a fast, action-based system that will nevertheless require thinking and tactics for players to emerge victorious. Players will need to keep one eye on the Aragami and be prepared to dodge out of the way or throw up their shield when they recognise the sign for an upcoming attack. Different Aragami have their own weakness and will require careful thinking on both the type of equipment and potential elemental damage it will do. Each variety of weapon has three different sub-types, which will affect both the type of damage done, as well as how quickly attacks and combos can be made or, in the case of the shield, how much damage is absorbed. While there are no health bars for the Aragami (though there is an equipment-related skill that will give a hint to remaining health), players are given clear but non-obtrusive indications how much damage is being done by each attack. 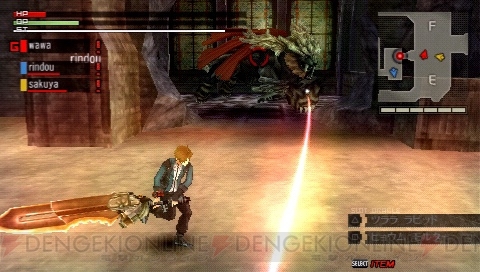 The Cloud Strife school of sword design is very popular in the future.

Missions generally take about five to ten minutes to complete, which with the fast-based battle system result in the Aragami feeling pretty tough, but never so much that fights become a dull slog. After missions players are free to wander around the Fenrir branch HQ (also known as The Den), where new missions can be found, equipment selected and upgraded, the extensive in-game database can be browsed, and fellow Gods Eaters and other assorted NPCs can be talked to. The system used for crafting and upgrading is very robust and easy to use, coupled with a rewarding loot system that provides extra items if certain parts of the Aragami are damaged. As there is no experience and level system, equipment is the only thing that determines how powerful the player-character is so players would be advised to keep crafting upgrades for their equipment. The in-game store provides basic items and equipment, but these simply cannot compare to those made through crafting. Bullet customization is worth a mention here as it can easily eat away many hours with the ridiculous number of possible creations available. A couple of potential creations of note are a bullet that splits into multiple lasers before continuing to it’s target, and another that works as a heat-seeking artillery round.

Go Shiina’s music score is excellent and matches the apocalyptic setting near-perfectly, with a mixture of orchestral, electronic and rock pieces. They are highly enjoyable to listen to during background moments, as well as to get the player pumped up during combat. While the voice acting is solid, unfortunately the script severely limits what the actors are able to achieve. The experienced cast does at least manage to ensure there are no poor or frustrating performances. Where the voice acting does have a useful role is during missions, as the characters will provide relevant chatter. In addition to allowing the battles to feel more immersive this also helps to give players information about what may be going on during the battle, such as when a character is planning to use a healing bullet. On the visual side, the game does a decent job overall. One plus point is in both the interesting architectural designs seen with buildings and mission sites, as well as some excellent Aragami designs. Unfortunately, there are a limited number of both, which does get noticeable as the game progresses with a fair amount of palette swapping as some Aragami are upgraded into stronger versions. Admittedly, a lot of the time the palette-swapping isn’t too badly handled, with a number of extra minor touches also added, and is justified in-game fairly well. However, it will still remain in players minds, also not helped by a lot of reuse of Aragami for different missions.

How much a player is likely to enjoy the story in Gods Eater Burst is entirely dependant on personal taste and what effect the heavy anime-trope usage may have. While the overall plot and setting are both very interesting, a heavy reliance on anime tropes leaves a lot of major points being very predictable, especially due to the lack of anything new in their execution. Unfortunately, this results in the script being nothing particularly special, albeit certainly enough of reward to players attracted by this type of story to keep playing. Characters are pretty likeable but again, due to the somewhat lacking script, they never manage to become especially memorable. As a result of Gods Eater Burst being the enhanced version of first Japanese release, the story itself is split into two distinct but connected storylines, with the extra ‘Burst’ storyline being a rewarding, but not quite as packed experience for those who enjoyed the original plot. Cutscenes do include the player’s created character, and while he may be silent, Gods Eater Burst does a very good job of making it feel like players are a vital part of the storyline and not just there in the background. 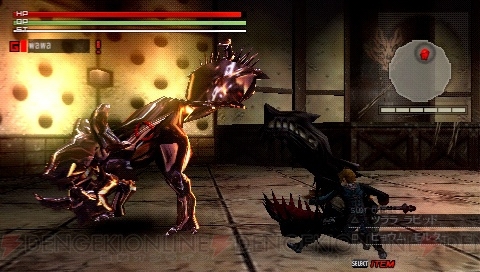 The Jaws of Life will have evolved into some different uses in sixty years.

There are some disappointments with the localization. One of the stranger and most frustrating issues coming from the odd decision to rename the game Gods Eater Burst as opposed to the ‘God Eater Burst’ title it has in Japan. This shouldn’t be much of an issue, but it’s painfully clear that this decision was made after voices were recorded but before subtitles are added, resulting in a lot of cases where the subtitles include a random silent ‘s’ that breaks the grammar. Another more minor issue is the lack of attention to the lip-syncing in the English voice track, as many of the sounds and mouth movements do not match.

It is worth noting that on the whole missions are not difficult to complete, but there will be plenty of situations where the player finds themselves knocked out over and over again, especially in missions involving fighting off more than one of the larger Aragami. Fortunately, the battle mechanics mean this isn’t necessarily a problem, with party members freely able to give some health to revive others. The AI does a good job of providing support in battle and even though they may not appear to be doing anything especially useful at times, when they are absent it is highly noticeable. Gods Eater Burst can be completed within forty hours depending on the amount of content completed. There’s tons of extra missions that can also be done concurrently with the main story, and coupled with the robust crafting system, a playtime of sixty hours or more is easily attainable. Challenges can also be unlocked after the final credits and may produce an extra tidbit of characterization to the cast, but do not add a lot to the overall story.

In the end, Gods Eater Burst certainly does enough to differentiate itself as not just a Monster Hunter-clone, and easily provides good amount of portable enjoyment. Whether or not it works as a story will be completely dependent on how much players can stomach overused anime tropes, especially the execution, but does at least arrive with interesting setting and premise. RPGamers who enjoy experimenting should find the battle system an excellent laboratory, especially with the superb bullet creator.