No One Suspects the Butterfly

Generation of Chaos: Pandora’s Reflection, the sixth game in the Generation of Chaos series, makes a number of changes from its usual formula, perhaps not for the best. Grand strategy aspects have been ejected in favour of a cross between more traditional tactical RPG play and real-time strategy, leading to a game solely trying to get by on its unspectacular battles with little to support it. As a game created by the entity known as Super Sting, a collaboration between Sting and Idea Factory, it’s quite jarring that nothing lives up that name.

The journey of Claude and his various companions takes place on the rather bleak world of Hades as he tries to break the curse that afflicts his sister Yuri, which manifests as a butterfly symbol on her neck. The fairly clichéd story is told entirely through talking heads and some text narration between each battle, and does an acceptable job of keeping interest provided players can forgive the fact that most plot-important aspects are never satisfactorily explained and the world is woefully underdeveloped. The characters themselves are likeable, however, and the talking-head storytelling allows decent interaction between them, even if it misses the impact of various locations where strife runs wild. There are multiple endings, although the point where this is determined comes very late in the game and is done quite obviously through a simple two-option selection, the only time the player has any say on what to do. 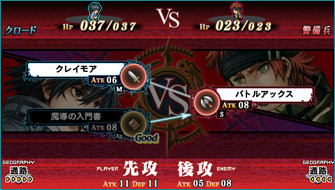 Everyone knows that book beats axe.

The battle system can be described on a rudimentary level as a cross between Advance Wars and Growlanser, taking place in real-time on a map as the opposiing sides attempt to eliminate each other and gain control of important areas. Each map features a number of important locations: a base for each side, unit points, strategy points, automated artillery, and occasionally some NPCs who can be talked to. The game is split into chapters, each chapter containing multiple episodes, and each episode generally involving either one or two battles back-to-back. Each side is able to have up to five units in play from their overall pool at any one point, although this number is dependent on how many unit and strategy points are under control. Players can reduce the number of units their opponent has in play by destroying strategy points or capturing unit points.

Units come in different classes, although as players are restricted to just using characters that join through the story they will only ever have access to a percentage of the overall number seen. Each class is able to equip two or three types of weapons, with these weapons having various effectiveness against others, and can traverse different types of terrain at different speeds. When two opposing units come into contact, combat commences with one unit striking before the other counters. However, the player’s party is able to turn these encounters into combos by involving their other field units immediately afterwards without fear of further counters, successfully using all five units in one combo resulting in a more damaging finish. When a unit is forced to retreat, by either having its HP reduced to zero or sufficient map points being captured or destroyed, they are removed from battle and unable to rejoin until the next episode.

Claude’s ability to use summons plays an important part in the more challenging battles, particularly those later in the game, although he doesn’t necessarily have to be on the field at the time to do this. Various summons provide a wide range of effects such as healing all allies on the field (the only effective way of doing so), destroying some enemy points and artillery, or reducing enemy movement for a time. These can be summoned whenever a bar at the top of the screen is sufficiently filled by collecting the crystals dropped when attacking enemies. Despite the various complications in play, battle system is actually quite straightforward in practice, and things are helped by a decent paced increase in difficulty that forces strategic thinking. 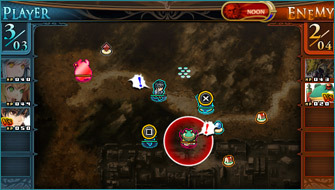 Everyone knows that book beats axe.

The campaign can be completed in around fifteen hours, with very little to do outside of alternations between battles and story scenes. Some special items or summons can be collected by talking to various NPCs who will sometimes provide items or swap certain items for others, although it’s never readily apparent that one exists or what the requirement might be beforehand. Players are given an opportunity between each episode to spend Alchemy Points (AP) awarded at the end of battle on extra experience and upgrading weapons, or to undertake a free battle should they find themselves needing to grind for experience or AP. These free battles are generally simple, dull affairs with little to recommend them and are not required. There is some scope for replaying the game, with hard difficulty unlocked after the first completion, as well as a New Game+ option that allows players to carry over levels, items, and AP. The alternate endings might also encourage a replay, but the obvious point of divergence comes so late that players may prefer to load a previous save instead.

The audio is one of Pandora’s Reflection‘s stronger points. The music is good and enjoyable to listen to as well as complementing the gameplay, while the full set of Japanese voice acting sounds solid and matches up well with the emotions conveyed through the localisation. Visually, however, the game is adequate but nothing more. It does the job, with the various colour schemes and artwork working with the game’s general tone and themes, but it’s very clear that the graphics were designed much more for function than aesthetics.

PSP owners could be forgiven for hoping that the system could go out with one last hurrah. Here, however, this feels like the system is going out with little more than a shrug. Pandora’s Reflection has some flashes of enjoyment, but these aren’t strong enough to hold up the game without support, which is sadly lacking. 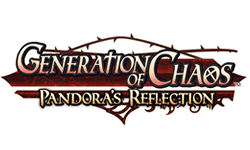