It’s nice to see a game trying new things, and Fallen Legion Revenants certainly does that, but the game’s actively hostile balancing takes away all of that goodwill.

When the original Fallen Legion dual title launched in 2017, it offered some compelling ideas resulting in an experience that, while not without flaws, offered a good amount of engagement. Developer YummyYummyTummy returns this year with a follow-up in Fallen Legion Revenants. The new title once again follows two different protagonists but merges them into a single campaign. While it brings some more interesting original ideas, the implementation results in a frustrating experience that does them a disservice.

Fallen Legion Revenants is a wholly-new tale following the exploits of politician Lucien and ghost Rowena as they attempt to overthrow Ivor, the ruler of a floating castle that acts as the last refuge of mankind from a world filled with miasma. While Rowena embarks on missions in the ruins of the world below, Lucien attempts to manoeuver his way around the castle’s council, providing what support he can to bring down Ivor in the process. 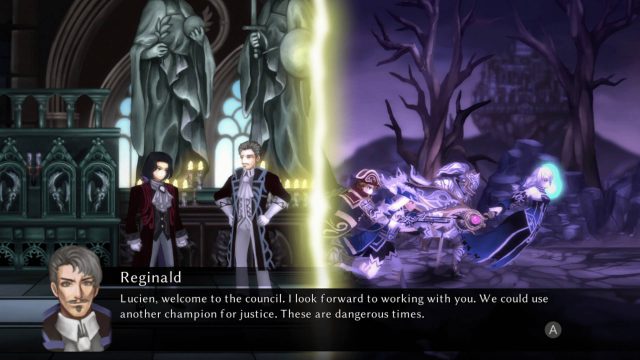 Fallen Legion Revenants swaps between Lucien’s political machinations and Rowena’s fights on the hostile world below.

It’s an interesting setting, albeit one that no one would reasonably want to be in, and the awful situation humanity is in provides many opportunities to stick players with the choice between a rock and a hard place. Lucien’s sections are ripe for strategic decisions in this vein, but the implementation simply results in annoyance and panic than any actual strategy. His sections are small vignettes that take place within Rowena’s missions, very often coming with incredibly restrictive and nonsensical time limits that force players into rushing rather than adhering to any sort of plan. Conversation and decision options are also frequently poorly labelled so it’s very easy to do an action that has a completely different consequence than what players were trying for. It’s interesting to see how some of Lucien’s decisions lead to significant changes at the castle, including potentially leading him to a premature death and credit roll, but the methods of getting there feel so arbitrary as to ruin the engagement. On top of this, the story and characters are not given any time to establish themselves as players are thrown into things, and the pacing is very inconsistent, making it awfully hard to care much about with the narrative.

Fallen Legion Revenant’s missions are similar to its predecessor(s). Rowena doesn’t fight directly, instead summoning powerful spirits called Exemplars that do her bidding. She advances automatically through the mission, dealing with encounters as they crop up, the majority of which are simple battles but with occasional decisions to be made and the aforementioned diversions to Lucien’s exploits. Combat is real-time, with each of the Exemplars assigned to one of the face buttons. When the action bar for the each of the Exemplars is filled, players can press the button to get them to attack up to three times in succession depending on how full the bar is.

While her incorporeal nature means she doesn’t attack directly, Rowena is able to cast supportive and attacking spells and resurrect fallen Exemplars. As players attack enemies, they earn points with which to use Rowena and her Exemplers’ spells and special Deathblows. Fallen Legion Revenants add a few new elements to combat, most notably positioning. Each side has a small number of rows that can move between, and some of these can be set to buff, healing, or debuff, with players also able to push back or pull forward enemies with their abilities. Enemies have a break bar, which must often be whittled down before players can do significant damage. There is no experience or leveling up in Fallen Legion Revenants, though players can assign equipment passive bonuses to Exemplars, such as shield or status that activates when Rowena casts a spell or the party achieves a perfect block. The limited options for manipulating the party’s stats puts a heavy emphasis on player skill, which when combined with other factors sadly end up not being a good thing. 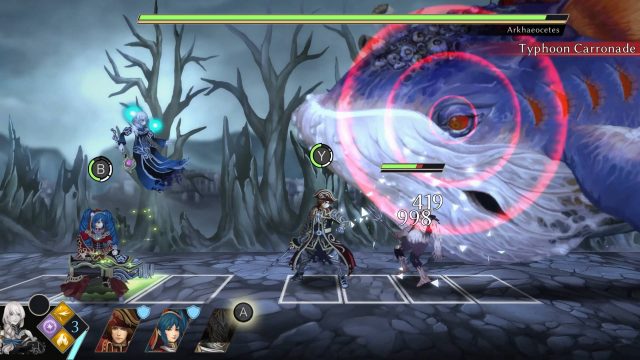 Regular combat is generally enjoyable, boss fights much less so.

Most regular battles move along a decent enough pace and make for enjoyable encounters, and the quick strategy of bidding one’s time before unleashing a successful and powerful combo feels rewarding. However, the game’s boss battles bring to the fore every issue with the system. Blocking is a major element of combat, and becomes the biggest during bosses, which is unfortunate as it’s also the most irritating. The game requires that players time their attacks to fully benefit and avoid taking damage, but the window is narrow enough and the enemies animated in ways that it’s incredibly easy to get the timing wrong. If all three Exemplars are defeated the game is over, but players can retry the battle, restart the mission, or return to the castle to try again with another loadout. There is no difficulty setting in the game, which feels like a major oversight given how the boss fights are balanced. At best, they are tedious encounters against foes with unnecessarily large HP pools, at worst they are incredibly infuriating and require a level of ability and timing that will prevent a decent number of players from even progressing past a couple of hours into the game.

Fallen Legion Revenants continues the distinct style of the series, which gives it a pleasing amount of character and matches the dark theme of the setting, but the sometimes clunky animations are part of the timing issues tied to the gameplay, particular when the screen starts to get busy. The game features some solid voice acting for major events, while the music is decent background fare but largely forgettable.