Fullmetal Alchemist and the Broken Angel

Square Enix has been busy of late. Not satisfied with a successful manga series by Hiromu Arakawa and an equally — if not more — successful anime series produced by Bones, the next logical step for the gaming giant was to produce a console game based on the alchemical world of the Elric brothers.

Edward Elric, the acclaimed Fullmetal Alchemist of the game’s title, is a 15-year-old alchemist. In this universe that means he can transmute objects into other objects with few restrictions beyond that of the Law of Equivalent Exchange: to gain something, one must sacrifice something of equal value. The brothers’ backstory is the same in all three incarnations of the FMA world: when they were younger, they attempted the forbidden technique of human transmutation to resurrect their deceased mother. The alchemy process went out of control and claimed Edward’s left leg, as well as Alphonse’s entire body, to fulfill the Law of Equivalent Exchange. Edward then lost his right arm in order to transmute his brother’s soul, affixing it to a nearby suit of armor, turning Alphonse into a walking, talking hunk of metal. Edward’s “Fullmetal” title was earned by the replacement of his lost limbs with automail, mechanical prosthetic limbs. Now, the Elric brothers seek the Philosopher’s Stone, a legendary alchemical focus that they hope will allow them to restore their bodies back to their original perfect form.

FMA‘s battle system has been said to be reminiscent of that of Kingdom Hearts, which is true in the sense that they are both action RPGs played from a third-person view. The player controls Edward in combat, making him jump, attack, roll, transmute environmental objects, or equip/swap weapons. Pressing the Call button brings Al nearby to perform tackle attacks or special combo moves, otherwise Al is controlled by the A.I. and fights of his own accord. Unfortunately, Al has a tendency to stand quietly by while Ed gets pummeled to near-death, necessitating heavy use of the Call button if the player needs Al’s aid. 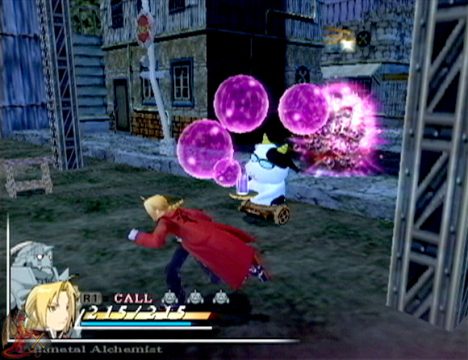 Combat is fairly simple, as there is only a single button used to attack; however, attacks can be combined with transmutations for longer combos and extra combo experience. While there is no way to defend against an attack, it is usually a simple matter to roll or dodge to avoid getting hit. In the event an attack knocks Ed into the air, it is also possible to perform a “Breakfall” move by hitting the jump button just before Ed comes crashing down. This allows him to hit the floor with his hand as opposed to more sensitive areas, and propel himself into an upright position. Failure to perform this move results in Ed lying vulnerably on the floor for a longer period of time.

The really entertaining part of the game is using alchemy to transmute environmental objects. Almost anything can be transmuted: lampposts, sandbags, trees, pillars. Each object can be transmuted into a number of specific objects. There are environmental weapons like mines, bombs, giant metal spheres, or oil slicks. Handheld weapons include rubber mallets, pogo sticks, swords, and hammers. Also available are installation weapons such as ballistae, gatling guns and mounted crossbows. There are also a number of odd items like Ed doppelgangers to distract the enemy, and a cow on wheels which spews poisonous purple bubbles into the battlefield. With the massive arsenal of weaponry available to players, special care must also be taken not to inflict friendly fire as Ed and Al can take damage from each other’s attacks.

One thing noticeably lacking from normal gameplay is a realtime combat menu. In order to use items, the player has to go into the main menu, from which accessories can also be equipped, changed or removed. This means that while applying healing items in combat interrupts the usually fast-paced gameplay, it is also possible to apply as many healing items as needed to avoid the dreaded “Game Over” screen.

Another issue FMA has is the camera controls. After the camera issues that plagued Kingdom Hearts were supposedly receiving much-needed attention during the development of Kingdom Hearts 2, it would be logical to assume that Square Enix would have a handle on this issue by now. Unfortunately, this is not the case, as changing the camera view with the right analog stick is insufficient to keep up with the fast-paced combat. Players thus often have their hands full trying simultaneously to evade attacks, change camera angles to track enemies, and attack or transmute objects.

The majority of the game takes place in real-time rendered 3D, either in combat or in cutscenes. Dialogue takes place with onscreen cel sprites and text boxes, reminiscent of Japanese dating sims. Occasionally there are anime cutscenes revealing more of the story through animated sequences in the style of the anime series. The cutscenes are well-made, with high-quality animation shining through despite the gratingly annoying English voice-actors. The realtime graphics also look good, though it sometimes seems like Square Enix skimped out on textures for some of its enemy models. Character models are well-designed, evoking the feel of the Fullmetal Alchemist world.

The game’s music is far from memorable, consisting of the same style of metal rock music playing through almost every stage. It is stylistically comparable to the music of Prince of Persia: Warrior Within, though not quite so heavy as that game’s selections. In battle, Ed and Al have some voice clips as well that can get rather annoying after hearing them for the thousandth time. The other sound effects fit well, from the swoosh of a mounted crossbow firing into the air to the gatling gun’s empty shell casings hitting the ground. 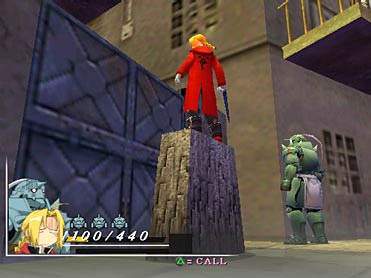 Fullmetal Alchemist and the Broken Angel is primarily a beat-em-up game. Though mission objectives occasionally differ slightly, they almost always boil down to destroying every enemy you can find. Normal combat is also usually very simple and requires little strategy or thought. The same cannot, however, be said for the game’s boss battles. Each boss has a specific strategy required to beat it, which the player must figure out and deploy as quickly as possible in order to not waste a large amount of healing items. As a result, the bosses are usually frustratingly difficult. Still, the increased difficulty of the bosses can occasionally be a breath of fresh air next to the mundanely simple normal enemies, and there’s almost always a certain thrill of excitement—or relief at the very least—upon defeating a boss.

The game’s localization is up to the usual Square Enix standard. Personalities and dialogue have, for the most part, survived the translation into English and maintain the same feel as in Japanese. The only problem is, as mentioned earlier, the typically poor voice-acting. The game uses the same voice actors as the Cartoon Network version of the anime, and would have greatly benefited if an option for a Japanese voice track had been included. Other than that, the localization is excellent and certainly does not detract from gameplay or story.

The game’s plot, which is based more off the anime series than the manga, branches off from a point in the anime’s storyline where Major Louis Armstrong is escorting the Elric brothers via train to Central Headquarters. The story deviates when the train is attacked by terrorists, and the plot thickens. The story centers around a Philosopher’s Stone wannabe called the Philosopher’s Catalyst and various people trying to get their hands on it. It’s hard to talk about the story without revealing spoilers, but put it this way: if you’ve read the manga or watched the anime, the story will be disappointing, and pretty much a rehash of past storylines.

In conclusion, Fullmetal Alchemist and the Broken Angel is a fun game to play. It’s very short and has little replay value. It is better than expected, though not as good as might have been hoped. Gameplay is simple, barring the frustrating boss battles. Existing FMA fans will find this game a treat and forgive its flaws. Others will probably have a better game experience by playing Kingdom Hearts again.