A surprise Nintendo Direct Mini on March 26, 2020, didn’t just give RPGamers plenty to be excited for, it also gave them the chance to try out the demo for Bravely Default II released on the eShop. The demo quickly confirms one thing: Bravely Default II is basically Bravely Default, but prettier. The highly customizable RPG series is back, and it looks better than ever.

The visuals of the demo are immediately eye-catching. The art style remains firmly Bravely Default with its chibi characters, but brings in a ton of visual niceties that seem as though they’re coming straight out of Octopath Traveler despite Bravely’s greater focus on 3D. The overall design seems like a child’s storybook brought to life on the Switch. The lighting is simply spectacular, making water glisten and metal shine as the characters move about. The effects are difficult to see in screenshots, but vividly stand out when the game is in motion. The overworld is nice enough, although the desert areas shown in the demo are a little bit bland. Still, you can see clouds of sand roll by and enemies roaming the areas, bringing life to the the barren lands. Noteworthy highlights are the amazing outfits. Each character has a separate model for each job and they are all highly developed. Taking just a few moments to scroll through them brings appreciation for the work that went into this seemingly minor detail. 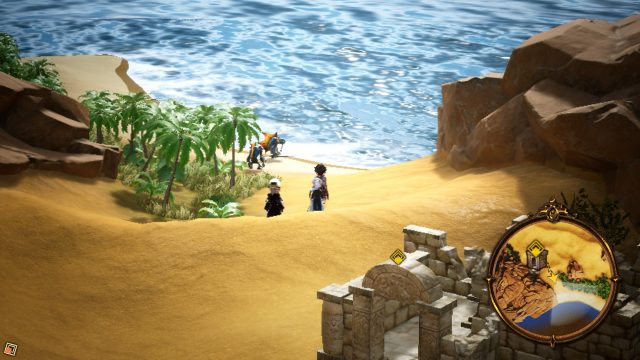 The overworld, like the rest of the game, is beautiful, with the rippling water and lighting being noteworthy highlights.

After first warning players that the difficulty level of the Bravely Default II demo is greater than what is to be expected of the full game, the four protagonists are introduced and players find themselves in the desert town of Savalon. Controls in the town are quite nice, with markers prominently displayed for primary story locations and accepted sidequests. For those looking for a more exploratory journey, the option exists to turn these guiding icons off. With a press of one shoulder button the camera zooms out, giving an overview of the city, while pressing the other shows a brief summary of the primary and secondary missions. Both of these are handy accessibility tools, keeping players in the know and likely being extremely useful should Bravely Default II turn out to be as long as its predecessors.

The four main protagonists are a treat, if all a bit JRPG-tropey. Appearing to lead the party is the prototypical amnesiac hero sailor, Seth. Then there’s Princess Gloria, from a kingdom once charged with keeping the world’s four Crystals safe. Elvis is the heavily-accented Scottish scholar who provides most of the one-liners and is set up as the main womanizing, comic-relief character. Adelle, a hired mercenary, rounds out the party of four available in the demo. All of the characters are very nicely voiced, and even their utterances during battle when they attack or get hit didn’t grow old, although there seemed to be some slight syncing errors with characters talking over each other at points during battle. 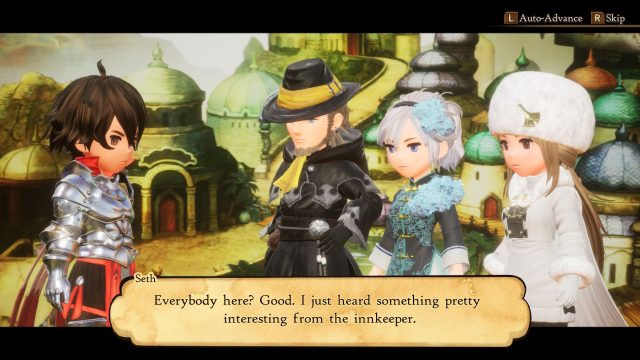 The party decked out in their job-specific outfits are a gorgeous sight to see.

Other than enemies being visible on the overworld and in dungeons instead of random encounters, the greatest change made to the demo version of Bravely Default II from its predecessors is the battle system. While initially it appears to be identical with the combat systems of games past with the storing up of turns and being able to attack up to four times in a row thanks to the Brave and Default commands, the game’s turns now take place on an individual level. Instead of choosing all of the characters’ actions at the beginning of a turn, players now control characters only when it’s their turn to act. While initially this sounds like a good idea, it’s difficult to tell whether the number of turns remains equal or if agility attributes affect things. It’s hard to generalize because of the demo’s higher difficulty, but monsters were using the Brave and Default systems to their advantage far more often than seen in previous games. What seems like a sundry battle with six enemies a step outside of town quickly turns deadly when all of them start taking multiple turns from the very beginning of the encounter.

Overall, I completely enjoyed my time with the Bravely Default II demo. It’s a beefy experience with many things to do besides just beat one Asterisk (job) holder. One can easily sink more than a few hours into it and not have experienced all that is there. While some minor audio syncing issues were noticeable and the battle system and difficulty are going to be tweaked before launch, Bravely Default II is shaping up to be an excellent 2020 release. I’d encourage any fans of the series to give it a try, and let Square Enix know what you thought about it.