From the Abyss Review

Return It From Where It Came

The Nintendo DS has a great number of games available, but could use some good action style RPGs to help round out the library. From The Abyss showed a lot of promise with its early screenshots. While the hack and slash gameplay with anime-style graphics may remind some of the reputable Secret of Mana, From the Abyss ultimately fails in key areas.

The introduction to the game feels like it has been lifted from an 8-bit Nintendo cartridge. Text explaining the paper-thin plot scrolls slowly against a picture of a castle in the backdrop. No animation or vocal soundtrack greets the gamer and this lack of presentation persists through the game itself. The bare bones character creation process limits the player to a few color and voice choices. Afterwards, the player is thrust into the town. The town consists of five menu options on the bottom screen, which may be chosen with a stylus or control pad. The options in town are as limited as the presentation. A store and inn fulfill their basic roles, and players may also speak with townspeople or the queen to find out more about the story. The few lines of dialogue each citizen tosses out comes across as uninspired and insipidly boring. While it is not unusual for action RPGs to have shallow stories and NPCs, From the Abyss lowers the bar.

The gameplay starts out with promise. Entering the first area, several well-animated monsters attack the hero. Each type of monster encountered has one skill that may be extracted through a soul siphon ability. These skills can then be set to the controller buttons. A variety of spells and weapon special attacks may be obtained in this matter. While this does increase combat options, some attacks are much more effective than others. For example, a higher level wind spell is cabable of wiping out an entire screen of monsters in one quick casting. Another may take a relatively long time to execute and inflict minimal damage. Furthermore, most foes do little to protect themselves. Several types, for example, simply stay in one place, waiting to be dispatched from afar. Even if the player approaches them, their mediocre attacks take significant time to animate, allowing plenty of time to avoid them. Interestingly enough, the game starts off mildly difficult, but actually gets much easier towards the end. Some of the bosses, in fact, can be defeated with minimal effort, provided the right skills are activated. 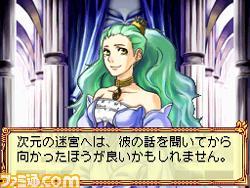 You won’t care whether she’s speaking English or not.

Controlling the hero is handled primarily through the control pad. However, to assign skills or use items, the player uses the touch screen. Having to use the bottom touch screen to do something in the heat of battle is inconvenient. Since most of the enemies present little challenge, it does not significantly detract from the already weak gameplay experience. As levels are gained, points are accumulated that may be distributed throughout various attributes. It can be very difficult to ascertain exactly how some of the statistics benefit the player.

In each explorable area, the objective to move on is fairly straightforward. The goal in the first three areas of each land is to find the exit. A handy map option on the bottom screen helps when direction is needed. After finding the third exit, the player meets up with the land’s boss. Each of the different eight lands are set after a different theme or element. However, these different areas do not present any changes to the gameplay. Working through each areas feels exactly the same. After beating the boss, the player automatically returns back to town to progress the shallow story. A total of eight different themed lands await, and completing them takes less than seven hours. After completing the game, players can run through again, with certain bonuses carried over from the completed game. Unfortunately, doing so only accentuates the monotonous nature of the limited gameplay. 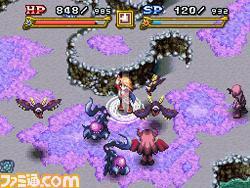 Are we there yet?

The character and monster graphics are bright and well-animated. Unfortunately, early attempts at graphical diversity are spoiled later on by recycled monsters. Spells and special effects lack visual pizzazz, and background graphics could use more animation and detail. The music and sound effects are serviceable, but entirely forgettable. Overall, the presentation is quite lacking.

It is apparent that very little production value was put into this game. While a deep plot and strongly developed characters are not expected in a lot of action RPGs, the gameplay, especially combat, must be compelling and well-balanced. From the Abyss totally drops the ball in this area. While still playable, the gameplay is so shallow, only the most forgiving gamers will give this title more than an hour or two. With unbalanced gameplay, recycled graphics, limited content, and almost no replay value, From the Abyss a disappointment and should be sent back into the abyss where it came from.