Omega Force has carved out a lucrative spot for itself in blending its action Warriors gameplay with other properties. Although some crossovers have met with mixed success, others have allowed fans to get on board with exciting mergings of themes. Fire Emblem is one such series to have enjoyed successful collaboration previously and returns for more with Fire Emblem Warriors: Three Hopes. Making highly effective use of the much-loved cast of Fire Emblem: Three Houses to tell its own tale, Fire Emblem Warriors: Three Hopes does a great job utilising its elements for enjoyable gameplay depth. Although the plot never feels like it knows what it wants to do, the character interactions and engaging combat ensure that the overall experience remains a thoroughly engaging one.

Three Hopes puts players in the role of a mercenary named Shez by default and available in male or female options, though the choice has no significant impact on anything in the game. The game kicks off with Shez’s mercenary company being swiftly defeated by that of Jeralt and Three Houses protagonist Byleth, also selectable in male or female version. However, Shez’s survival and their connection with a being called Arval drastically alters proceedings as they end up recruited as a student into the academy at Garreg Mach. 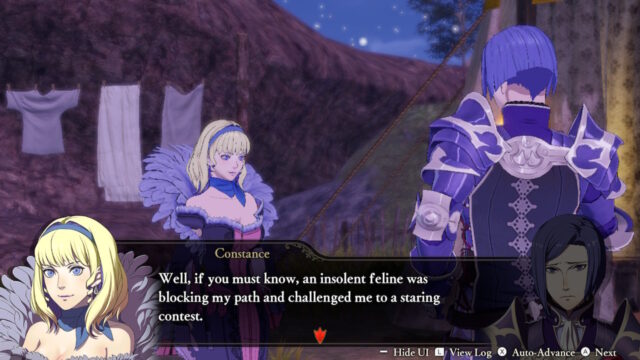 The characters are in fine form with their interactions.

Three Houses and Three Hopes are both set in the continent of Fodlán, which is home to three powers and a central church. The Garreg Mach academy is run by the church and acts as a unifier, with each power having their own house within the academy. Shez is given free choice on which house to join and this set them upon one of the game’s three routes as they look to build up their power. Fire Emblem Warriors: Three Hopes shows its divergence from the timeline of Three Houses swiftly. Unlike the tactical RPG, which spent the majority of its time at the academy, Three Hopes quickly jumps into a two-year time skip and the breakout of war between the three nations.

The rush into the main conflict presents one of the curious issues with Three Hopes’ overall story. The game doesn’t bother wasting time trying to give the conflict and the ideals behind it much of a setup, and that largely carries on throughout at least the Leicester Alliance’s Golden Wildfire route. It certainly feels like the game is relying on players having the background established in Three Houses for context. While each route is linear, there is a “true” route in each that depends on the player’s actions in a specific battle and delves a bit into the player’s connection to Arval. However, again, it’s sorely lacking in sufficient build-up, context, and follow-up to make the events satisfying.

However, making up for the plot’s lack of direction are the character interactions. It’s here that the localisation and strength of the Three Houses cast — including a few extra faces and the Ashen Wolves of the Cindered Shadows expansion — shines. Players already familiar with the cast will find a small number of welcome additions, but even for newcomers the characters are full of personality, aided by fine vocal performances throughout. Both the support conversations and interactions through the main story do much to making them endearing. Although the support levels don’t lead to anything in the credits, they are still among the most enjoyable and entertaining moments in the game. 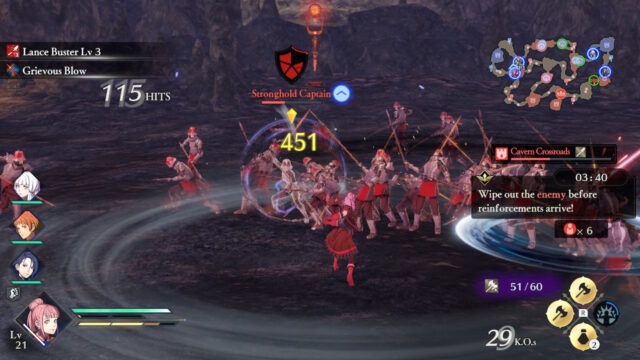 A good selection of classes and skills ensure an appreciable amount of depth.

Each route in Three Hopes is divided into a little over fifteen chapters, with the first route at least lasting around forty hours. Each chapter has a story mission built up by completing a variety of smaller missions in which players capture the regions leading up to it. In between battles, players can return to their base where they can interact with characters, purchase items, upgrade weapons, unlock classes, and more. Like Three Houses, each chapter grants a limited number of actions that can be used on facilities or actions that increase character’s supports, moods, or class mastery; there are no availability restrictions nor an in-game calendar to deal with, however.

Each battle gives players up to four fighters that they can directly control, with the story missions adding another four non-playable allies. Combat follows the regular Warriors template of fast-paced hacking through enemies as players try to either defeat specific targets or claim strongholds. Players can expect most battles to run up to ten minutes, with the bigger story fights taking longer, usually with multiple main objectives and sub-missions that keep the action flowing at a fast clip. Players can switch the controlled character easily, and can order them to attack or defend specific units, adding a welcome element of strategy and thought to the otherwise hectic combat. Players will often find themselves having to deal with additional unexpected threats and ensure their units are ready to cover multiple parts of the battlefield at once rather than going all in on a single target.

Three Hopes does a great job implementing the different elements of Fire Emblem’s combat system. The expanded weapon triangle system means that different classes and weapons are suited to taking on different enemies. Players will need to make sure they pay attention when selecting their party and giving orders, though the game makes it readily apparent where units have an advantage. Joining those, the game includes implementations of the pair up and battalion systems, which is a nice touch albeit not impactful on the regular difficulty. There’s enough loot that trying to sort through it all can get a bit tiresome and on the regular difficulty it means the blacksmith and weapons vendors are entirely unneeded, but it’s at least easy to optimally equip characters with a single button press. The tiered class system allows any unit to become any class, minus a few exclusives, and the difference to how each class feels goes a long way to retaining engagement in the combat system. The game encourages players to use their whole roster, though if anyone does get behind level-wise, it offers a quick way to bring them up to speed for money. 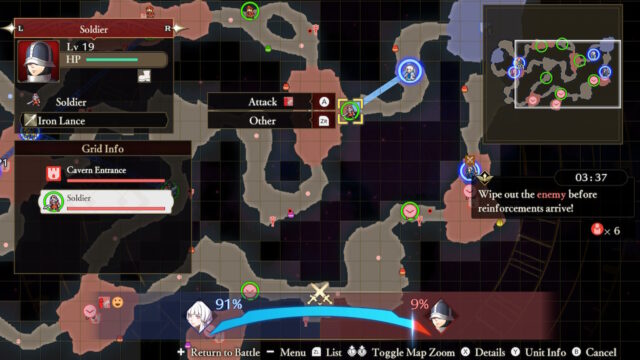 Like most Warriors titles, the game is player-friendly in terms of challenge. On the normal difficulty players may need to heal occasionally, but as long as players don’t have their units take on advantaged foes, charging forward with occasionally avoidance of telegraphed attacks is more than enough. It includes the recent Fire Emblem “Classic” and “Casual” options, the former meaning that defeated units can be lost forever, though it shouldn’t be too hard for experienced players to get through without having anyone knocked out unless they actively seek a tough challenge. Ultimately, the depth Fire Emblem Warriors: Three Hopes goes into bringing the Fire Emblem gameplay systems into it allows the game to stand up for its extended playthrough time and remain fun to play throughout.

It’s worth noting the game performs excellent on the Switch’s handheld mode with very swift loading times, and it looks good too. The character models are nicely realised and pop out among the battlefields. Primarily taking place in an altered timeline two years after the introduction — rather than the five of Three Houses — allows Three Hopes to bring in a new batch of character costumes, which is an appreciable touch. In addition to the aforementioned strong voice performances, the game’s music is highly enjoyable to listen to and provides a fine backing to the action, with some catchy themes in the times of respite as well. There’s plenty of in-combat chatter that helps add to the specactle and can keep players informed if they miss anything in the UI.

Fire Emblem Warriors: Three Hopes deserves to be thought of as one of the strongest Warriors crossovers so far. The game fully dives into the elements of its parent series and is all the better for it. Although the overall story is eminently forgettable, the opportunity to spend more time with the characters and see them interact with each other again is very welcome, and it’s backed up by strong gameplay that makes fine use of the depth available to it.