Koei Tecmo has discovered a good formula, letting it leverage Omega Force’s hack-and-slash Musou expertise with the appeal of well-loved series from other publishers. Following Hyrule Warriors, Nintendo seemed more than happy to give the idea another go with a different series. Fire Emblem Warriors is a fun, if somewhat predictable, merging of the series, utilising some of the tactical series’ aspect in interesting ways.

A deep plot has never been Fire Emblem‘s forte, relying more on its cast for narrative appeal, and the same applies to Fire Emblem Warriors‘ Story Mode. Twins Rowan and Lianne, the offspring of Aytolis’ Queen Yelena, take center stage when fiends start pouring out of rifts in the sky, with the nation’s neighbour apparently using this opportunity to invade at the same time. It does the job well enough, but even with the heroes — and a small number of villains — from Awakening, Fates, and Shadow Dragon, it’s still a very straightforward Fire Emblem story about an invading power, complete with some similar mythology and relics, and the one real twist is entirely predictable.

The hack-and-slash combat will be eminently familiar to anyone who has previously played a Musou title. Players can launch combos of standard and heavy attacks to swipe away waves of enemies, though the real opponents are the captains, of which the vast majority in Fire Emblem Warriors are just nameless soldiers, monsters, archers, etc. Various forts and outposts are scattered around the map, and defeating the leader of these means that they are conquered and further units generated from them are on the player’s side.

Some maps have further restrictions, but generally players can choose up to four characters that can be controlled, switched between at any time during battle, and four others who can only be controlled by the AI. Unlike other Musou games, however, Fire Emblem Warriors nicely takes some inspiration from the tactical part of the pairing by letting players give commands to their heroes. These can be defensive commands such as guarding a certain area or characters, or offensive instructions to attack a fort or specific enemy. This comes especially in handy when the game throws out sub scenarios and missions, such as reinforcements suddenly appearing, where cutting off forces from different areas is key. 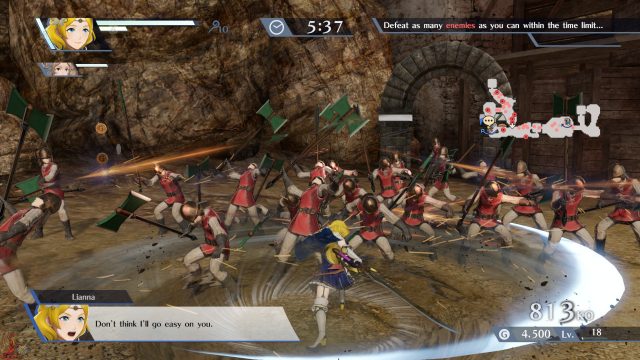 It was well worth sending thousands of troops to their doom for that small amount of damage.

Barring a few rare exceptions, it is fairly easy to button-mash through the normal difficulty, though there are multiple options to switch freely between, including a Lunatic difficulty unlocked after first completing the story. Although it’s highly satisfying and on the whole a lot of fun, the main problem with the combat is one that applies to virtually all other Musou games, and that is its repetitiveness. Despite the variety in classes offered by the game’s roster, there’s barely any difference in how they play, generally just altering attack radius and speed. Even when mixing up characters and with different victory conditions, combat still feels very much the same throughout. Though I enjoyed my time with it, by the time I finished the final story mission, I had begun to get tired of the sameness of slashing through enemies.

Good use is made of a wide variety of aspects from the tactical RPG series. At the start of the game players can choose between Classic where characters die and Casual mode where they revive after battle, though even on Classic characters can be brought back at the temple. Excellent use is made of the weapon triangle, granting sword-users decent advantages over axe-users, making flying units very vulnerable to archers, and so forth. The Pair Up mechanic of recent titles also appears, letting one unit act solely as support for another unit, giving that unit stat boosts and a few special defensive and attacking abilities. Other aspects like Dragon Veins and areas only flying units can pass make appearances, though most are just used to unlock paths rather than really affecting anything tactically.

A traditional Fire Emblem leveling system is used, raising a random selection of stats upon earning enough experience, albeit more favourably weighted in favour of growing many stats than the parent series. Weapon and item equipment is present, with some implements receiving attributes such as being effective against certain unit types. On top of this there are also upgrades created by spending loot from combat to provide additional boosts, including adding another potential combo attack, reducing damage from a weapon type, or upgrading weapon proficiency to expand equipable options. Characters above level fifteen can also use a Master Seal — found in chests on certain maps — to upgrade classes, granting them huge stat boosts and a new costume. 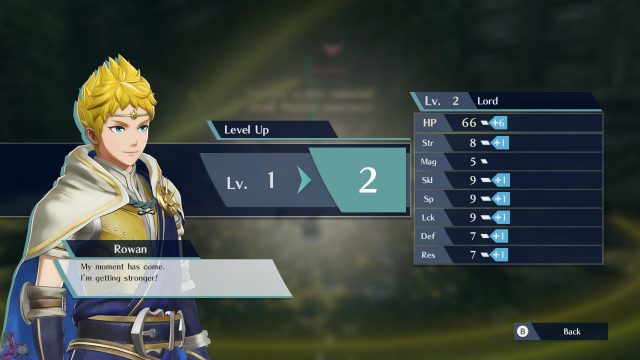 Thankfully this is more common than the opposite.

Outside of redoing the missions on higher difficulties, it appears that once players are done with the twelve-to-fifteen-hour story, they will spend most of their time on History Mode. This provides a series of battles on a themed map from one of five Fire Emblem games, adding in ones for Echoes and The Blazing Blade (aka Fire Emblem GBA) on top of the three games whose characters appear in Story Mode. Here is where players can unlock those characters that aren’t unlocked in the Story Mode, such as Celica and the female version of Robin, and some new costumes. These have their own very light storylines, based on the original events but with some twists. This is also where players will likely spend time building support ranks and where the fanservice truly kicks in. Though there’s only one actual support conversation per valid pairing at the A+ rank, these will be highly rewarding to series fans as they get to see the characters interact, including some very humorous ones.

Though voicing in Fire Emblem games is sporadic where it even exists, Fire Emblem Warriors is fully voiced throughout and strongly so. As mentioned earlier, the support conversations are where fans are most directly targeted and the voice acting really helps with these. The sound effects are nice as well, including the quintessential Fire Emblem level up fanfare, and the music provides a good backing for the action without standing out. The visuals are also very strong with the performance on the Switch being solid throughout with great use of character models for all the named characters. Unfortunately, the generic enemies that players will see an awful lot of are on the other scale, with uninteresting designs and no real character to them. Admittedly it’s par for the course on Musou games, but this also applies to their voice acting, simply as there will be lot of repetition during combat.

Although it won’t go down as an especially memorable title, there’s a lot of fun to be had with Fire Emblem Warriors. The interesting usage of all the aspects from the tactical RPG series certainly added to some freshness to the standard Musou formula, and it was great to see a lot of the characters given the high-definition treatment and the interactions between them are sure to please a lot of fans. 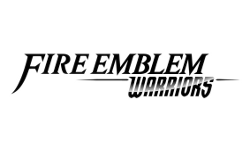