Fire Emblem‘s latest iteration, The Sacred Stones, is the eighth game in the series to be released, but only the second one to see American soil. While the series has always been popular in Japan, it’s still fresh to American gamers and it is thanks to the success of the first game that we have another here. The Sacred Stones continues this tradition of excellent gaming by delivering a solid package on all fronts, securing the future of Fire Emblem on this side of the globe.

At the heart of every Fire Emblem game is it’s battle system, which is turn-based tactical goodness. For those who have played its predecessor, The Sacred Stones delivers more of the same, with almost all of the combat mechanics, classes, and even weapons remaining the same. The weapon and magic systems, which operate as glorified Rock-Paper-Scissor games, still exist, but the amount of influence they have on battle has been cut down, with pure weapon statistics and character attributes taking precedence. However, there are some differences in battle, one of the biggest being the large number of monster type enemies, who can easily off balance a player that relies on weapon and class mismatches to win a battle. Most of the battles in the game come down knowing the enemy. Knowing the movement range and equipment of the enemies and having an idea which enemies will go after which units, the battles become fairly simple due to a predictable AI. However the element of surprise can’t be dismissed, both in enemy maneuvers and critical strikes. All the preparation for battle won’t help when your favorite unit suffers an unlucky critical hit and goes down. In this game, like all Fire Emblems, when units go down, they are gone for good. Players have to be ready to spend a lot of time redoing maps if they want to make it through the game with every character.

Visual and musically, the game sticks to the standard Fire Emblem sounds and graphics. New animations exist for many of the combat scenes and of course for the characters’ portraits, but the maps and status screens are nearly identical to the previous game. The game has a few cut scenes, which are mostly just static picture backdrops, and all the dialogue in the game is held against standard backdrops with character portraits in front of them. Most of the music will be familiar to those who are already acquainted with the series, which isn’t really a bad thing. There are quite a few original tracks, which helps boost the total tune number to an impressive 69 tracks. The quality of most of these is good for GBA with a few falling both above and below the median. The game even provides a sound room to listen to all unlocked tracks at will. 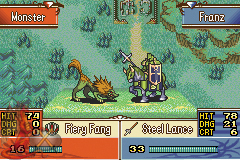 This wolf doesn’t know how much trouble he is in.

While not a terribly difficult game, Fire Emblem will take most people some time to complete. Running through the game using a static crew of characters and just overpowering the opponent at every turn, a person could speed through the game up until the very last chapters and can probably get the game done with a brisk 15 hours clocked in. If a player take their time to work up a balanced team and explore the two optional dungeons the game offers, they can easily clock upwards of 25 hours of the game. It is also important to realize that these numbers do not take into account the fair amount of resetting a player will do on any given level when the need to start over arises, especially if trying to get through the game without any casualties. Also, the game comes with a hard mode right out of the box, which is probably the best way for the hardcore gamer with Fire Emblem experience to go if a challenge is desired.

Considering how text-heavy the game is, the localization team really put in 110% to get this game to shine. Nearly all the text is clear and concise, from the major scenes to the off-topic character interactions. The interface is also pretty clear, although once a player gets a lot of characters, micromanagement can become a hassle. The biggest gripe about the interface comes with shopping off the main map. Individual characters must be sent into the store where they can only sell items on them, making it very tedious whenever its desired to sell more then 5 items at a time. Also, characters can only hold up to 5 items, so when a player wants to buy more then that, it is sent to storage, which then has to manipulated after the purchase is through. 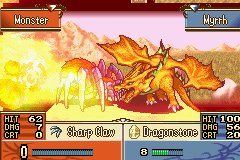 I hope he likes being served well done.

It’s apparent that the game lacks in originality, but it’s hard to call this a flaw. Having such a base of history to follow up on, it really can not be expected to find all that much orginal material. It’s more of a “if it ain’t broke, don’t fix it” kind of thing. The reasons Fire Emblem games are loved are the battle system and the classes it has created over its long life span. The few changes that do exist are all for the better, which give the game some credibility in the originality deptartment. There are some changes the the class system that really breathe new life into it. In addition to a few new classes, almost all class changes that occur involve making a choice between class types. For example, mage can become a mage knight, giving it more speed and movement, or a sage, giving it more magic to use and more magic power. This is especially helpful with the melee units, as a player can go from strong offensive base class to a strong defensive class for a strong overall character, or stick to one main attribute and have an walking wall or a powerhouse fighter.

The main plot of the story is probably the weakest link in the game, as it’s very cliché. You play the hero who sets out to protect her kingdom, only to end up needing to protect the whole world. Pretty unsurprising, but the story does still manage to satisfy with many of the quirky individual stories and a few plot twists.

The final conclusion is that Fire Emblem: The Sacred Stones is a great choice for any fan of the series, or any TRPG fan in general. While there is nothing that will surprise a series veteran, that doesn’t stop it from being an excellent game. With variable difficulty modes, optional dungeons, and two different character paths, it’s a game worth playing through a few times.