The original Fire Emblem: Monshou no Nazo (Mystery of the Emblem) was an odd duck that half remade the original NES game, and half gave it a direct sequel showing the further adventures of Marth. Having remade the original game in the form of Shadow Dragon, Intelligent Systems apparently decided to skip the second FE and go straight for putting all of Marth’s journeys into the current era. Fire Emblem: Shin Monshou no Nazo Hikari to Kage no Eiyuu is the not-so-snappily-named result and Nintendo’s decision to pass on localizing it outside Japan keeps the rest of the world from easily partaking of Marth’s full story. Doing so probably made sense from a business standpoint, but Shadow Dragon lovers should check the game out anyway.

Monshou no Nazo‘s story picks up several years after the end of Shadow Dragon. Formerly an ally of Marth’s in the quest to defeat Medeus, Hardin has become seized by a lust for power and is conquering his neighboring countries to prove it. Leading the resistance once again is Marth, and the power behind Hardin’s actions may just prove to be one he’ll recognize, especially when dragons start appearing as adversaries.

The original game’s story was expansive only by comparison with its NES ancestor, and the remake adds vast quantities of dialogue. The tale’s complexity hasn’t increased much since 1994, so all the additional text is arguably unnecessary. Support conversations have been reintroduced after they were absent in Shadow Dragon, but the fact that now they are an option readable from the battle preparation menu allows non-Japanese speakers to skip them while still getting the benefits.

Plenty of characters in Fire Emblem games turn mute after joining, but considerable time is taken to ensure My Unit is integrated into the plot. My Unit is player-created at the beginning, with statistic growth rates influenced by several questions in the style of Langrisser. The character then goes through eight new Prologue battles that ingratiate him or her so well to Marth that My Unit becomes a valued commander and adviser during the story that follows. The rest of the narrative isn’t greatly altered except for the insertion of several side story battles that feature a group of new villains from the Prologue, but the insertion of this new character into the plot makes the person far more than a throwaway. 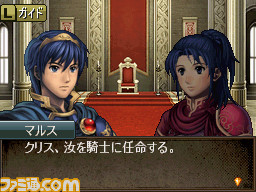 Meet the ever-versatile My Unit, able to become pretty much anything in a single bound.

Aside from being a familiar helping of the standard tactical battles the series is known for, combat benefits considerably from the changes made to the original format. In particular, the need to dismount every character riding a steed for indoor jobs has been done away with, and helps immensely for speeding up combat. The feature of Shadow Dragon that displays the range of enemies onscreen with a press of a button is an amazingly helpful mechanism that speeds up combat superbly by reducing the need to count enemy move ranges. Almost every element of Shin Monshou no Nazo is the same as it was in Shadow Dragon, keeping that game’s strengths in the core combat mechanics. Like almost every entry in the series the combat is arresting.

Shin Monshou no Nazo also introduces a means of helping characters level outside of battle. In the battle preparation menu a new option now exists to have characters fight extra battles. The proviso is that the privilege is not free, but characters can be equipped with whatever they want for these fights. Using this option frequently gets expensive, but it allows for an effective means of gaining side experience without the risks of the arena.

Attempting to test every character in the game is prohibitively expensive due to the enormous number of them. If the player succeeds in recruiting all possible characters the battle roster will be a mammoth seventy-four, and the number that can be deployed never exceeds twelve. This problem has admittedly been with the series for a long time, but the number of characters seems to constantly increase.

With all the modifications made to the original 1994 mechanics, it’s odd that Intelligent Systems didn’t change a few things that firmly root the game to that period. Marth is the only character who can visit villages, and every battle map that came from the original game must be finished by having him conquer a throne. Needing to do this constantly gets a touch monotonous.

Even if the only difference between the original game and its remake was the presence of save points in the middle of battle, the new game would be considerably easier. Shin Monshou no Nazo has quite a few sticky situations and nasty choke points, but the presence of a difficulty select allows the player to determine just how trying the ordeal will be. The easiest setting is roughly on par with Shadow Dragon‘s default difficulty, which with the retaining of permanent character death can be arduous to those reared on other tactical games but will not faze veterans of this series. The ability to change character class outside of battle from Shadow Dragon is still here to let different setups be tried, although since character growth rates were mostly designed around their starting occupations the results may not be ideal. 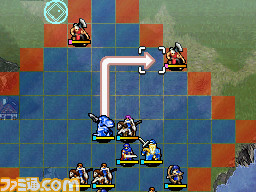 Look at all the colors – is it a secret 70’s pop art exhibit exhumed for today?

Intelligent Systems reused most of the visual assets from Shadow Dragon, and this game accordingly is almost indistinguishable from it. That is not necessarily a bad thing, but this game has very little new to show in the graphics department. Its music is somewhat more varied than the first DS game, featuring mostly the standard march-style tunes for battles but with enough variety to keep from hearing the same track too often. These tunes are of variable quality but the good ones are quite catchy, and the final battle’s organ-dominated composition is rather interesting.

Intelligent Systems appears to be returning to new Fire Emblem stories if the 3DS game’s initial reports are accurate. Though a few of their archaic roots still show, the DS remakes of early games in the series have turned out rather well, and Nintendo’s refusal to localize this one is a shame. Shin Monshou no Nazo is perfectly playable to anyone who knows how Fire Emblem combat operates, and the experience is definitely enjoyable although not the series’ finest hour. Fire Emblem veterans will eat it up, and the uninitiated might find the difficulty options a fine way to get started.