If Fire Emblem: Awakening hadn’t sold so many copies, it would have been the end of the series. Intelligent Systems saw its efforts rewarded by the marketplace though, and the follow-up to Awakening tosses in even more alterations to the series. Fire Emblem Fates: Conquest is but one part of the complicated Fire Emblem Fates release structure, and by itself a few things don’t fully work. It is nevertheless a worthy entry in this lengthy franchise and assuredly worth experiencing by tactical veterans.

All Fire Emblem Fates versions begin with the protagonist, whose default name is Corrin, becoming acquainted with his or her siblings in the royal family of Nohr. This occurs after the entirety of Corrin’s remembered life has been spent in an isolated fortress, and is immediately followed by King Garon of Nohr tasking his child with investigating the neighboring nation of Hoshido. The investigation goes awry, and Corrin gets to meet his or her birth siblings among the Hoshidan royalty. Conquest forces events along the path of Corrin reuniting with Nohr and seeking to make the world a better place via the quick subjugation of Hoshido to end bloodshed, a job that proves more difficult than initially expected.

Fire Emblem‘s main draw has never been the narrative, and Conquest doesn’t change that, although its effort is appreciable. Most of the characters are enlivened via support conversations in the vein of Awakening, something that helps greatly since few people have anything to say in the overall plot after joining. Many of the support conversations uphold the series’ tradition of keeping interesting characterizations in the optional dialogue, and taking a little time to partake of them is rewarding. The overall narrative is less impressive than the writers would like it to be, partially because Corrin is such an idealistic naif that it’s difficult to take the character seriously, which makes the overarching theme of doing bad things for the greater good a tough sell. The Fire Emblem tradition of having opponents felled in battle be dead is also gone, leading to conversations about how to deal with just-vanquished opponents who generally show no signs of wear after their bludgeoning. The villains are so obviously evil with no redeeming aspects that taking them seriously as multifaceted characters is a great challenge. Conquest succeeds in some of what it tries, and the support conversations bring a great deal of helpful background information to the scenario, but the writers didn’t deliver the complexity such a tale demands.

Fighting closely resembles that of numerous other titles, superficially adhering to the turn-based tactical action concepts found elsewhere. Characters move around a map with tiles and do battle with enemies using a variety of weapons, while the foes counterattack if possible and deliver their own onslaught once all the player units are done for the turn. Characters can pair up for protection, as only the lead in a pair takes damage. Awakening‘s unpredictable possibility of having adjacent characters sometimes join an attack is now a consistent occurrence, though the additional attack only does half the damage it normally would as a means of balance. Enemies also have the occasional pair to vex the player, and adjacent foes will also join in for attacks. Otherwise combat looks much the same as it did in Awakening but with more predictable reactions from adjacent participants, which is hardly a bad thing. 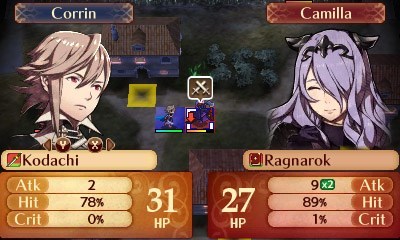 Usually, Camilla smiling means something different than this.

Where Conquest stands out is in the variety of battlefields it offers. Corrin and her Nohr family, along with the Hoshidan royalty, can substantially alter the terrain in ways such as knocking down walls or altering the move range of specific troop types. A number of interesting new units are present, including maids who use daggers that temporarily reduce statistics of those attacked, and pegasus troops armed with bows and arrows. Conditions change on these battlefields constantly, and the enemies often have plenty of dangerous skills to make life interesting. Weapon endurance has also been done away with in Fates, removing one potential headache for players.

Another way in which Conquest diverges from the prior Fire Emblem titles is having a home base that the protagonist can wander around in. While the explanation of how this place came to house all of the characters who have joined is murky at best, it provides a place to put various activities for fun such as a lottery, along with an element of development simulation by letting the base’s aspects be improved. Little of what is offered would hold attention as a separate game, but since everything here can be ignored in favor of speeding the story battles along, its presence is never burdensome.

Fates returns to the idea of letting characters support each other until marriage that Awakening possessed, although the presence of grown children makes even less sense than it did formerly. Obtaining the kids is done through a number of unique battles that are very interesting, and often worth getting a couple attached in the first place. Dealing with enemies on ships that move around each turn, or mounting a rescue before a hostage can be executed, shows some of the ways Intelligent Systems put a lot of thought into these fights. Getting the kids on the team is also quite useful, as they combine traits from parents that can be extremely powerful in a dangerous encounter. Trying to make sense of where the kids have been is unwise, but getting them onto the team manages to be entertaining enough to compensate for the lack of logic. 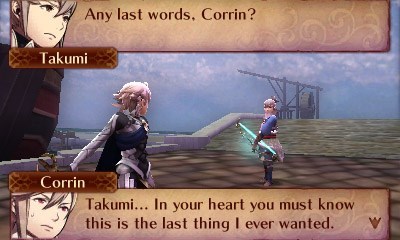 Conquest offers strong enemies situated in favorable positions for their side, and it doesn’t have respawning battlegrounds to take advantage of for grinding purposes. The difficulty select option is bizarre, in that it can be lowered but never raised. At the lowest possible difficulty beaten characters will reappear at full strength on the next turn exactly where they were brought down, which is certainly a good means of ensuring that just about anyone can triumph in the twenty-five or so hours it takes to power through the core battles. Persevering will still require a little tactical sensibility using this method, but nowhere near the amount in most other games.

The visuals of Conquest are pretty close to those of its predecessor and are solid without being dazzling for the 3DS, though character feet can be seen all the time here instead of disappearing into the ground. Character models are good and battle features quite a bit of action to show off snazzy moves, though during story sequences the expressiveness of the models is lacking. Music and other audio resemble Awakening, with strong compositions that swell in volume and orchestration for battle animations, then subside afterward. The voice acting style of Awakening is replicated here, giving characters a number of short clips that do not necessarily fit with the text onscreen and will be heard many times before the conclusion, though their delivery is strong.

Volumes have been written already about Nintendo’s decision to release a limited number of Fire Emblem Fates special editions, but the result is that I can only review what falls under Conquest. It is entirely possible that playing Birthright and Revelation would become revelatory and make me regard the whole as one of the finest tactical games ever, yet I can only comment upon this part of the Fates experience, which is hardly a terrible thing. Its combat stays consistently interesting and most other aspects are on par with Awakening, which is plenty to make it a fine tactical title worthy of investigation by anyone intrigued. When the rest of the game is considered, it feels as if Intelligent Systems tossed in just about every notion to cross the development team’s mind, which makes applauding its ambition easier than considering everything a rousing success.