Nintendo outside Japan didn’t seem to be placing much faith in Fire Emblem: Awakening and only casually mentioned it in response to a question at 2012’s E3. The company has since come forward with a surprisingly large promotional push, including a 3DS bundle for new system adopters who want the latest Fire Emblem too. After failing to bring the second DS title out of Japan, this bespeaks a surprisingly high confidence on Nintendo’s part that the new game will perform very well on the sales charts. Whether Awakening lures a mass of casual gamers has yet to be seen, but it does enough right to warrant attention from anyone with even the tiniest glimmer of interest in a quality tactical game.

Awakening takes place in the same universe as Marth’s earlier adventures, except thousands of years later. It begins with the player-named tactician and this game’s Lord, Chrom, confronting a repugnant fellow named Validar. Their apparent victory is revealed to be a fake, as Validar has taken over the tactician and cut Chrom down. After this prologue the tactician awakens in a rural area with severe memory impairment, but enough innate combat prowess to join Chrom, his sister, and his loyal knight adjutant in putting down a bandit breakout. Chrom is quite taken with the tactician’s abilities, and his quickly-growing force comes to rely upon the gifted strategist for survival against multiple adversaries threatening the peace, plus the occasional intrusion of dead warriors known as the Risen. Eventually Validar appears as a quietly malevolent force, and the level of control he can exert over the tactician will be put to the test. The tale told represents an attempt to do something a little different while sticking to the general template of conflict across great spans that Fire Emblem is known for, and does a respectable job at it.

The tactician character represents a cross between the oft-ignored strategist of the seventh Fire Emblem and the player-created fighter of the twelfth title, being integrated very tightly into the storyline. Most other characters have little dialogue directly related to the plot after joining, but support conversations to flesh them out have been reinstated to the series after an absence, and in keeping with Path of Radiance they can be accessed at any time outside of battle. The old limit of just five conversations per character has been axed, with the only limitation being characters can achieve the marriage proposal of S-rank status just once. The plethora of conversation options this opens up allows the cast to seize plenty of time in the limelight should the player wish. They’re also easier to unlock, letting characters who directly aid each other in an encounter quickly increase their friendship level, instead of the system most prior titles used of making protagonists stand next to each other for a certain number of turns. 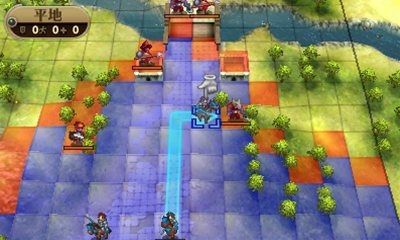 Keep an eye out for the occasional bird flying overhead. Their aerial drops are deadly.

At first glance the combat in Awakening looks very similar to other games in the series. A weapons triangle between swords, lances, and axes dominates close combat, with magic and arrows operating outside the triangle’s effect. Characters have a chance for their statistics to go up with each level gained, and many of them have good enough growth rates to conceivably make anyone into a worthy combatant. The extremely helpful ability to have the map display where any, or every, enemy can move has been inherited from the two DS titles, significantly shrinking the amount of mental math the player must compute. Aside from that, Awakening‘s mechanics are clearly inherited from the earlier entries in the series, though their refinement here is sharp enough to make combat quick and easy.

Several noticeable differences will become apparent with a little time, the most significant one being how differently characters support each other. When a character is directly adjacent to another, at the very least an automatic ten percent accuracy bonus is achieved. The other character may jump in with an additional attack to supplement a friend, and can also swoop in to completely block an enemy attack. For characters with support conversations to increase their mutual goodwill, the direct bonuses to statistics become more numerous, and the chance of aid against the enemy increases substantially. Characters have skills that can make a considerable difference in a fight, from abilities to absorb some HP from the enemy to temporarily boosting the statistics of allies within a range. Hearkening all the way back to the fourth and fifth games, many classes can wield both physical weapons and magical tomes, increasing their versatility to a significant degree. Most characters have a choice between two options when class changing, and the game supplies numerous items to allow the player to switch between those choices to see their respective performance if desired.

The one addition that doesn’t help too much is pairing up, a means of putting two characters into one square for stat bonuses. Doing this makes only the dominant member of the pair (which can be changed) gain any experience, and the statistic benefits of doing it are generally outweighed by simply being next to someone else. A pair also has no more chance of both members doing something in an engagement than compatriots alongside each other on the field, making it completely inessential.

Fire Emblem: Awakening allows players to choose the difficulty before beginning, and also affords the option of doing away with permanent character death. In casual mode defeated persons will be just fine after the current battle ends, which all by itself reduces quite a bit of the nail-biting stress common to the series. The game possesses a fair amount of challenge and demands considerable tactical thinking even on the easiest setting, but to Fire Emblem series veterans it’s nothing even close to insurmountable.

Awakening is structurally different from most games in the series, though veterans of the second game on Famicom and The Sacred Stones on GBA will find it somewhat familiar. A world map gradually appears as the story progresses, and the Risen sometimes appear on former battlefields should the player want some extra experience and items. Merchants with special equipment also appear around the map, benefiting those who choose to peruse their wares. Aside from the Risen, extra Paralogue stages appear as the game progresses. None of them are mandatory, and they tend to feature considerably stronger adversaries than the player might be prepared to face, but having the option to tackle them at leisure is very handy. Beelining through the game, one can conceivably finish in twenty-five to thirty hours, but tackling the Paralogues alone will add a great deal more time to that, plus Nintendo offers DLC for those who wish it. 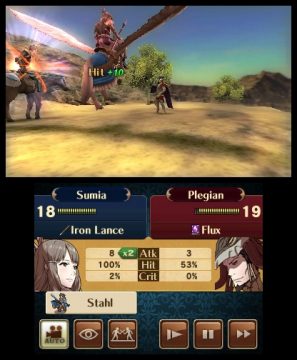 The enemies are too stupid to use supports, but laughing as they die is considered bad form. Do it anyway.

Reviving a concept from Fire Emblem: Genealogy of the Holy War, this one allows players to match male and female characters as spouses. After a certain point in the game the idea that characters have come from the future to avert a horrible world is introduced, and the majority of the Paralogue stages only appear to allow recruitment of these grown progeny from pairs the player has made. The kids gain skills from both parents and are able to handle themselves without much effort from the player, broadening the cast substantially and affording a worthwhile reason to try getting characters infatuated.

A few characters gain a skill that reduces their weapon usage, but Awakening‘s cast is by and large limited to a certain number of times their pieces of kit can strike before breaking. Whether a character can equip something is always made perfectly clear, and Chrom serves as a means of accessing the convoy, holding spare supplies in the middle of a fight, making it as easy as possible to address any sudden surfeit of implements. The eventual size of the game’s cast makes inventory management somewhat time consuming, but Intelligent Systems did a fine job ameliorating frustration. No mandatory function has been assigned to the touch screen, but a closer look at any of the data available in battle is always available by tapping it, a useful means of reducing unnecessary clutter.

Unlike some games in the series such as Shadow Dragon, this one sports a healthy variety of battles to work the player’s mind. Many of them boil down to simply killing a boss or everything on the field, but the variety of landscapes makes doing so feel anything but repetitive. Highlights include a battle in which the enemy will ignore the player and aim straight at an NPC, a fight on a volcano with constantly crumbling rock, and a frantic rush from gradually appearing inaccessible enemies that will pelt the protagonists with long-range magic.

At first glance Fire Emblem: Awakening has visuals that barely improve upon the DS games. Looking closer at the battlefields reveals a host of tiny details such as wind-stirred leaves and draining waterfalls that show Intelligent Systems expended a fair amount of effort on the presentation. FMVs are infrequent but quite captivating, and battle animations do the 3DS hardware justice. There is the odd decision by the developers to make every character’s feet either seem to be under the ground or incredibly small, but otherwise the visuals are consistently engaging. 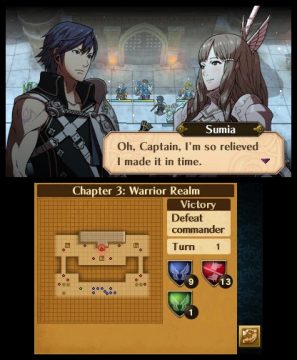 Sumia has the slight problem of tripping on everything she sees, but as a pegasus rider she doesn’t need to worry in a fight.

The music of Awakening is a varied and high-quality lot. Much of it sounds like actual orchestral arrangements instead of synthesizers and the compositions are consistently worth hearing. Intelligent Systems added a dramatic touch by making the music increase in volume when a combat sequence occurs, then recede after the animations are finished. Most of them sound like genuine orchestral and choral work, with real musicians performing the material to lend it an extra touch.

The other side of the audio is the voice acting, which is quite pleasant and appropriate in battle scenes. Outside of combat it works much less effectively, actually sounding reminiscent of Skies of Arcadia by having characters frequently say a few words that often are related to their text in only the most tangential way. Awakening actually trumps Skies in that regard by having characters usually say something every time the dialogue passes to someone else, and while the effect is not exactly ideal, neither is it ruinous.

Fire Emblem: Awakening does an awful lot right, and seeing some of the things it incorporates from the rest of the series is a treat for veterans. Whether Nintendo’s positioning of the game as a tentpole release in North America will pay dividends remains to be seen — just because this is more accessible than most for newbies does not make it any less of a tactical game, hardly the best-selling genre in the gaming world. Awakening is nevertheless a genuine treat for anyone seeking a deeply rewarding tactical title on the 3DS, and a fine return of the series to the English-speaking world after the last game missed out.