Final Fantasy XIV: A Realm Reborn is what I like to refer to as a love letter to fans of the series. The game is an MMORPG that offers many nostalgic references to earlier games, such as the classic job system, chocobos, magitek armor, airships, and monsters such as puddings, cactuars, and tonberries. The game is still an MMO, but as I detailed in my impression it is quite different from Square Enix’s prior venture into the online genre with Final Fantasy XI. That said, this game offers plenty of interesting content to fans of both MMORPGs and the series in general.

The story of Final Fantasy XIV is right at the heart of the game, varying from what one would expect from an MMO. The player’s character becomes a heroic adventurer who rises up the ranks in the land of Eorzea, helping the nation against the corrupt primals (summoned monsters such as Ifrit and Titan) as well as the encroaching Garlean Empire. The game often tasks players with filler quests in the gaps between story content, but it’s not overwhelming. It’s easy enough to just take a direct route through the main content, as progression is doled out at a steady pace.

Well-paced content is meaningless if it’s not interesting, but thankfully A Realm Reborn succeeds in that area. The main questline is filled with interesting characters, surprising story twists, and a slow build up of tension leading into the final conflict. These scenes are well-written and serve more of a purpose than simply pushing players forward to the next task. Aside from the main story, there are quests for each of the game’s classes that feature a continually developing side story in the form of neat little vignettes that add extra depth to the world. All of the game’s story content wraps up on a solid, satisfying note, which ends the current crisis neatly, yet still leaves hooks for more content in the future. 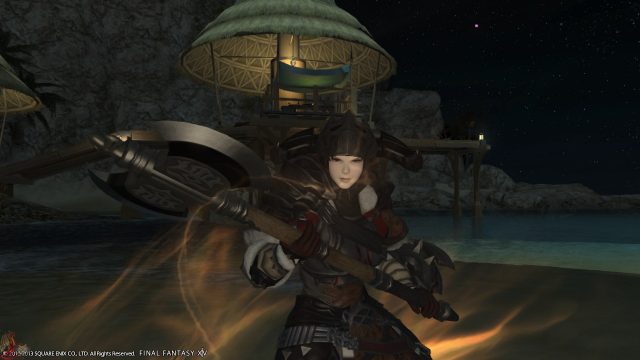 Combat in A Realm Reborn takes place on an open field where players engage one or more enemies in a free roaming environment, very much like other MMORPGs or even single-player games such as Final Fantasy XII. What really makes the game stand out is the armoury system, the job system that allows for swapping between eight classes, each with their own level, at anytime outside of combat simply by changing weapons. This means players can heal as a level twenty conjurer in one dungeon and then smash foes as a level forty warrior the next. This doesn’t work within the game’s instanced dungeons, as they have specific guidelines, but it still allows a great deal of flexibility.

There are currently five physical (Marauder, Gladiator, Lancer, Archer, and Pugilist) and three that are magic focused (Thaumaturge, Conjurer, and Arcanist) with each class having at least one specialized job (Warrior, Dragoon, White Mage, etc.) that can be unlocked at level thirty. Players gain new skills every few levels all the way to fifty with class quests every five levels to help players learn the ins and outs of their job. It’s a very robust system that allows for a lot of customization and variety for players wanting to try out multiple roles, especially since players can slot in skills from other classes. It’s nice to not be trapped in one role for the entire game. 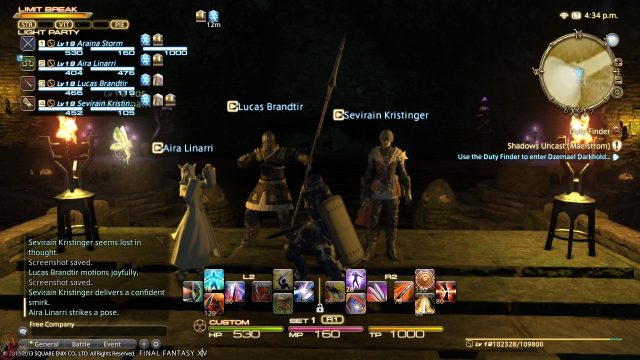 Dungeons are better with friends.

Players who reach the level fifty cap and complete the story still have plenty to work on. The end game features more boss battles, dungeons, and gear to collect. Progression through the post-story areas is still a work in progress, as players repeating high level content can easily clash with those who are looking to leisurely experience a new dungeon for the first time. More areas are being added and tweaks are being made to the system, so it’s being improved over time. Aside from combat, there is also a robust crafting system. This allows players to gather materials and craft their own armor, weapons, and items, which is very handy for those juggling multiple classes. It’s not essential, as story quests generally provide appropriate level equipment for players through a natural progression, but it adds yet another level of depth for players to get lost in.

Final Fantasy XIV is available on both PlayStation 3 and PC, and as such there are modes for both keyboard and mouse and for a controller. Playing with a controller is smooth, allows for quick movement and actions, and just feels natural, but a keyboard is still recommended for chatting with others. Part of the armoury system allows for armor sets to be assigned for quick swapping between jobs which helps cut down on micromanaging. Other features that make the game more accessible are being able to quickly warp to previously visited areas, level syncing to allow players to easily enjoy lower level content, and using the Duty Finder for matchmaking across servers. While the game might seem overwhelming to start with, it opens up quickly and allows a great deal of freedom and customization in a user friendly environment. 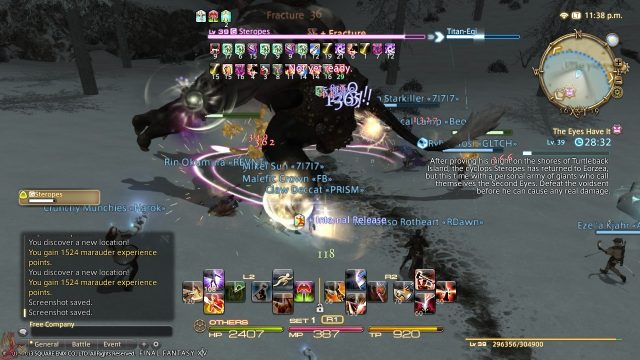 A Realm Reborn is beautiful, with a variety of stunning locations which are often brought to life with the day/night cycle and varying weather effects. The character creator is deep, allowing for lots of customization options such as varying eye colors, hair highlights, and facial markings. The game’s five races might not offer a great deal of differentiation in stats, but it helps for creating unique looking characters. Colorful armor and weapons also add to the quality of the game’s aesthetics, as they offer a variety of styles and can even be dyed. Everything about the game is varied and colorful, even combat animations, making the visual presentation a highlight.

The game’s soundtrack is also outstanding, featuring a few tracks from the initial version by Nobuo Uematsu, specifically the haunting main theme “Answers.” Many of the game’s new tracks come from Masayoshi Soken and are equally impressive. The variety his tracks offer range from inspiring battle themes with lots of brass instrumentation to lovely piano music which plays while exploring fields. There are even rocking guitar tracks, such as “Fallen Angel,” which plays during one of the more intense primal fights. The soundtrack is fantastic throughout, and the music fits perfectly within the game’s setting.

Final Fantasy XIV: A Realm Reborn is the complete package. With a well-written story, characters you care about, a flexible class system, lovely visuals, and a grand soundtrack, this game offers about everything you could want, especially for fans of the Final Fantasy series. MMOs are nothing new, not even to the Final Fantasy series, but Final Fantasy XIV feels like something completely different. This is a game that is easy to get lost in, whether playing by yourself or with a group. It’s a perfect blending of online and solo content in a way that makes the game addictive without feeling like an addiction. The main story can easily be completed within a month’s time if you simply wish to plow through that and bail, but those looking for something to do beyond the story will not be left wanting. For now, if you’re looking for a quality RPG with a healthy dose of nostalgia, Final Fantasy XIV: A Realm Reborn is it.