Flying Strong in the Not-So-Friendly Skies

Four years of waiting, several delays, and quite a few changes once hindered Final Fantasy XII from reaching North America, but now the game has been flung to the public to be picked apart and devoured. It has a difficult heritage to uphold, as it will be subjected to far more scrutiny than a non-Final Fantasy title. However, Final Fantasy XII seems to be the most carefully constructed title in the series to date, and it may be strong enough to withstand the pressure.

Final Fantasy XII is a story of war, betrayal, rebellion, and freedom — both political and personal. Set in the fantastic world of Ivalice, Final Fantasy XII is the story of Vaan — a thieving boy who dreams of becoming a sky pirate — and Ashe — a strong-willed princess seeking to claim her throne. Commoner and noble unite in a singular cause of saving the kingdom of Dalmasca from the belligerent Archadian Empire. As the story unfolds, one will question who can be trusted, but loyalties and ulterior motives gradually become clear. 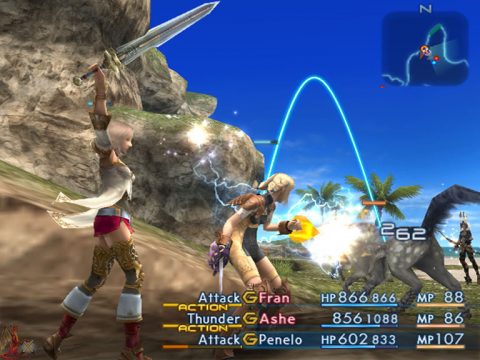 Ashe, Penelo, and Fran teach an unfortunate wolf the real meaning of “hits like a girl.”

The biggest change to the series’ tradition is with the battle system. The Active Time system persists, but the separate battlefield notion is gone; instead, the entire world of Ivalice is the battlefield. Combat feels rather loose at first, but once the player has adjusted to the system, it feels quite comfortable, even as it drives one toward efficiency in dispatching swarming monsters. Enemies roam about freely, fighting each other or working together. The player controls whichever character he or she chooses as the leader, and the rest may be controlled by AI commands called Gambits. The player may enter commands, or set Gambits to dictate the characters’ actions, whether they are simple or complex. For example, Gambits can make a support character keep fresh Protect, Shell, and Haste on the party, or order a strong melee character to run around smashing everything. They can also make a character cast a negative status spell until the monster is afflicted, then change to another tactic. Not everything can be easily set up, however; a good steal Gambit is hard to find. Gambits can be turned off, but the demands of battle may prove to be too much for some.

Character development in Final Fantasy XII depends on the License board, a massive chessboard of skills, spells, augments, and even weapons and armor. Players acquire squares on the License board by spending points accumulated from defeating enemies, and each purchase grants access to adjacent squares. By being choosy with Licenses, players can create specialized characters such as a bow-wielding black mage or a paladin who can both endure and unleash damage. 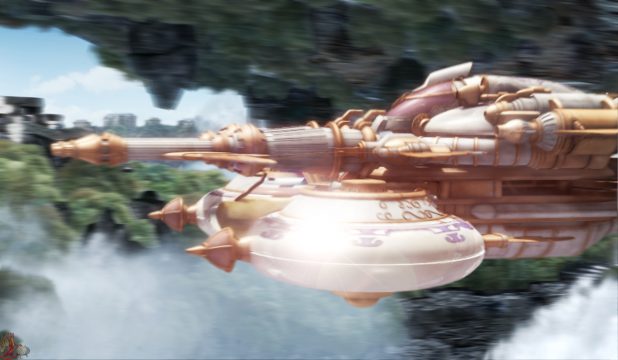 Unsurprisingly, Final Fantasy XII has outstanding visuals. But this beauty goes beyond quality in-game graphics and lengthy full-motion video. Each town, dungeon, and field is carefully crafted and lavishly detailed. One may enjoy a spectacular view of a city from a balcony or marvel at hulking, rusted airship wreckage embedded in the ground of the wilderness. Towns are vibrant and filled with life; numerous NPCs fill the streets and shops, each one caught up in his or her activities. Vendors and patrons motion to each other, as if haggling over prices. In a small group of people, one person gestures as he or she tells a story, and the others suddenly burst into laughter. Dockworkers rush around a port, even bumping Vaan aside, as they carry bags and boxes on their shoulders. Dungeons are shadowy, and fields have changing weather.

The sound of Final Fantasy XII is nearly perfect. Hitoshi Sakimoto’s musical score is bold, epic, and magical; the songs fill the environments, strongly resonating with each one. The remixes of classic Final Fantasy songs are largely on-target, giving fresh sound to familiar tunes. “Kiss Me Goodbye” does not fit in very well as an ending theme for the story, but the song is still lovely. Unfortunately, the rest of the sounds are not as high in quality. While sound effects are quite marvelous — the harsh clang of a sword hitting a shield, the refreshing rush of a Cure spell — the voice acting recording is substandard at times. It sounds as though a few of the actors were too close to the microphones or the equipment was faulty. At least the voice acting itself is quite good, with characters of different nations having distinctive accents.

Though the game may be completed in 55 hours or so, the sidequests can extend the timer to 100 hours or more. There are plenty of Marks, or notorious monsters, to hunt, Espers to defeat and acquire, and remote locations to explore. Generally, the game is quite easy, aside from adjusting to the battle system, gathering loot to sell for gil, and overcoming some very challenging bosses. Final Fantasy XII forces players to work hard, think creatively, and even struggle with hardships — a welcome challenge in the series. Even with the new battle system, the interface is still easy to handle, aside from the flashy limit breaks that require twitchy, fast fingers and a dash of luck to be remotely effective.

This may be the best Final Fantasy to date. There are a few technical flaws, but the rest of the game overshadows them. Some players may find the new battle system heretical and offensive, but those who accept it will become immersed in the hectic, almost realistic battles. Regardless of whether one likes the battle system, the character designs, or music, Final Fantasy XII is still a solid, well-crafted title.