It took four years for Final Fantasy Type-0 HD to make the jump from its Japanese PSP release to the current console generation. It’s tough to say if enough was done within that time to make it worthwhile. With some questionable design choices and haphazard storytelling, Type-0 can be a bit of a mess. At the same time, it redeems itself with some enjoyable moments and fantastic gameplay. While far from perfect, there are enough good aspects to the game that its release is worth celebrating.

Type-0 starts off with a big info dump. Lots of names and places are tossed out with little background as to who they are or why they matter. While this torrent of proper nouns gradually tapers off, the game’s overall story continues to remain adrift. Players are in control of Class Zero, an elite squad of cadets from the Dominion of Rubrum who are in the middle of a world war. These twelve unique characters are joined by two new outsiders, Machina and Rem, who serve as the characters with the most real development. Despite not diving deep into their pasts, the other class members do each have their own memorable personalities as they battle for the greater good of the Dominion. 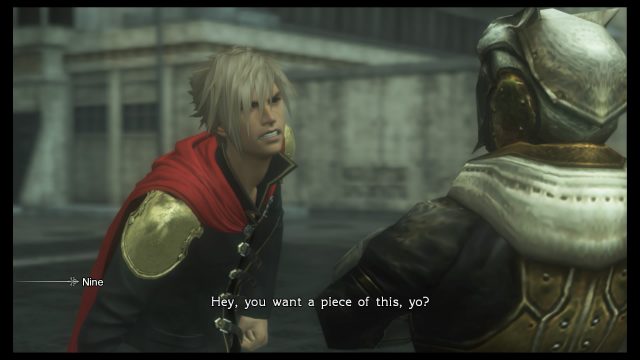 Nine is also his IQ, yo!

While the characters are interesting, even if they aren’t too deep, the real problem with Type-0‘s story is its lamentable pacing. It often feels like Square Enix had a large, political story to tell, but wasn’t able to find the best way to tell it within the constraints of the game’s structure. Cutscenes are often too short to progress the narrative and most of the plot is given in bits and pieces throughout the game via NPC interactions or side quests that provide a bit of information here and there. There are additional scenes that are only available in New Game+ which further flesh out parts of the story, but it doesn’t help with the incomplete telling during a single playthrough.

The reason this is a serious issue is that the characters, areas, and worlds that were crafted for this game are interesting and offer a lot of potential, but it feels like this is never lived up to during the course of the game. The cuts from one scene to the next are often awkward with transitions that sometimes don’t make sense. It also means that scenes which should have a major impact on the player tend to fall flat because the character development just hasn’t happened. It’s easy to see the story’s potential, but it’s not fully realized. A ready example is a character with a Tonberry companion, which seems like a very amusing sidestory that is never expanded upon.

On the other side of things, Final Fantasy Type-0 offers a diverse battle system with a wide variety of characters to select from. Whether going on missions or exploring the world, players can take three party members into battle with them. If one of those characters die, any of the others in reserve can be called in. Each of the fourteen playable characters has a unique playstyle and a wide range of support skills to equip. In fact, characters have so many skills available that it’s a shame they can only select two of these plus one magic skill to equip at one time. 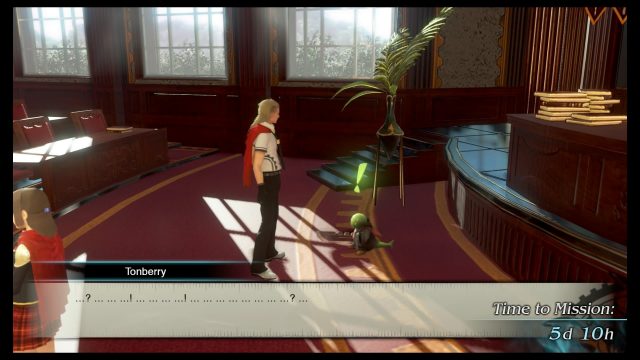 Put down that knife, man!

In battle, combat is well-paced as enemies and characters are moving about in real-time and dodging around to try to survive. Fights are often very challenging, as some of the higher level bosses are tough and can one-hit kill characters with a single misstep. On the other side, with proper timing players can easily get killshots in on enemies themselves. Equipment upgrades help, but it doesn’t seem to matter nearly as much as skill and timing. A mission that ends in a complete wipeout one time could easily be finished without a scratch on a second attempt. Often the biggest problem is due to the chaotic camera, which can get stuck or aimlessly fly around when locking on to a target. It’s frustrating and doesn’t help make combat any friendlier.

While it’s easy to pick a team and stick with it, characters level individually, so players don’t want to end up with underpowered backups when most needed. Between missions, there are ways to mitigate this through completing quests outside of the school, going into the battle arena, listening to lectures, or going through secret training that allows for gaining experience while the game is off. Thankfully, it’s not too difficult to keep party members even. 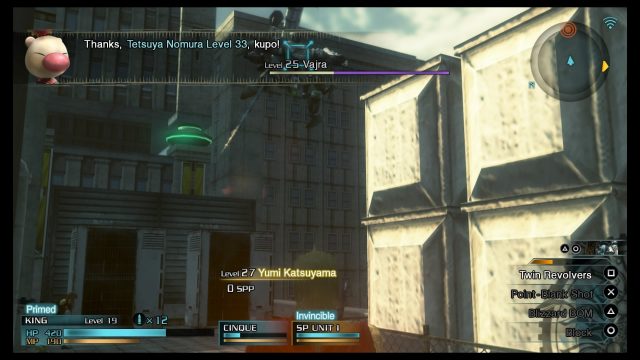 Time for a new meme. Thanks, Nomura.

Another of the game’s big problems comes into play between story missions, back in Akademeia. Players are given a set time between missions to complete side tasks. Talking to NPCs eats up a little of this, and often leads to more story and an item. There are also quests offered up that range from bringing back items to exploring the world to complete tasks. Sadly, only one quest can be accepted at a time, so if it requires leaving Akademeia that will take up a big chunk of time available before the start of the next mission. This means that a lot of these will have to be saved for New Game+ instead of getting everything done on a single playthrough. It all goes back to the game’s awkward structure; from the lack of fast travel around Akademeia to the time between missions with little to do, Type-0 is not well-paced. Thankfully, most of this is optional, as it’s easy to just ignore the side content and move on.

In the transition from the PSP to HD systems, Final Fantasy Type-0 received an overhaul in graphics and also in audio. The graphical upgrades are impressive considering that this started off as a PSP game, but don’t really hold up to the potential of current generation visuals. That aside, the art style holds up very nicely and works within the confines of the game well enough. In terms of audio, Type-0 is a bit of a mix. The soundtrack is fantastic, a personal favorite even, but is not really highlighted as well as it could be during the course of the game. Many of the best tracks are only played occasionally and in small segments when shown off. The voice acting, however, is less than stellar as deliveries are inconsistent at best. It wouldn’t be surprising to hear that the English audio was recorded earlier and then new segments re-recorded for this release, but for whatever reason the voice work doesn’t impress like it should. It’s clear a lot of work went into transitioning this game for an HD release, but its roots on the PSP come through quite often.

While Final Fantasy Type-0 has a lot of problems, the game’s focus on gameplay really works as that’s its biggest strength. The diverse cast of characters means that it’s easy to craft a party of favorites and enjoy destroying the most challenging of foes. The thrill of battle and fast-paced action rarely lets up, which is great. The problems come when the game does slow down, as the between-mission structure drags and the story just doesn’t come together like it should. If you can speed through to the battles and let the story wash over you, there’s a lot to enjoy here. While not the complete package, what Final Fantasy Type-0 does well is combat and the game gives you as much of that as you want.