Final Fantasy PSP is by no means a brand new experience. It’s hardly a detriment to say that the game is lacking in originality, being twenty years old this year. The very fact that it’s still playable after all this time is an impressive feat; however, this version of Final Fantasy is almost identical to the Dawn of Souls rendition on the Game Boy Advance. There are a few additions, but nowhere near enough to make this seem like a brand new game.

Story is one thing that the original version of Final Fantasy was never big on, and that has not changed for the PSP version. It follows the quest of four youths destined to restore light to the crystals. The game begins with the King of Cornelia asking the group to rescue his daughter from the clutches of former knight-turned-traitor, Garland. Upon reaching Garland’s hideout in the Chaos Temple, the four youths easily dispatch the wicked knight and return the Princess to her gracious father. The King finally comes out of his despair and fixes the bridge to the rest of the world. The main characters have no life to them whatsoever. They never speak; have no personality, backstory, or even names for that matter. These flat personas are dwarfed by NPCs that are only slightly more interesting since they actually have dialogue. This is exactly how the original version was, but this kind of story just doesn’t stand up to today’s level of RPG plots, as even some of the most mundane make some attempt at a story. Even the DS remake Final Fantasy III added a little more depth to a previously lacking plot, so this copy and paste of a non-existent story doesn’t cut it. 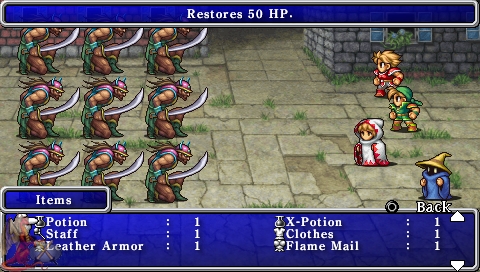 Combat for Final Fantasy has changed little over the years, but for those who have not gotten their hands on the Dawn of Souls version, things will seem new. The party consists of four characters made up of any combination of the game’s six job classes: Warrior, Thief, Monk, Red Mage, White Mage, and Black Mage. Warriors are the sword wielding, heavy armor wearers, the Thief class is the agile attacker, and Monks are the lightly armored powerhouses. They can be upgraded to Knight, a Warrior with limited white magic usage; Ninja, speedy damage dealer with access to some black magic; and Master, a more powerful Monk. White and Black Mages use their respective color of magic with the Red Mage using a limited mix of the two. When upgraded, they become more powerful and have access to higher level spells. As with Dawn of Souls, magic use has changed from the way the original game handled it. No longer are spells limited to a specific number of casts per spell level. Instead, characters now have traditional MP. This makes the game a lot more manageable, but does cut into the challenge the original offered. Other than the change to magic, this game still plays the same as it always has. Melee fighters have no special moves and mages have no new spells or abilities. Gamers should expect plenty of random battles, though most are dispatched with little effort as are most bosses. This may be the same old Final Fantasy, but it sure seems much easier.

The PSP version of Final Fantasy does play fairly smoothly, only having a few issues. All menus and options are easily accessible, though when accessing the main menu there is a little bit of loading before the screen appears. Along with that, there is also a bit of a loading delay at the beginning of all enemy encounters. It’s nothing major, but it is noticeable. Equipment management stays true to form with options to sort as well as to manually organize items. One note of interest is the fact that this game, like its Japanese counterpart, has options for both English and Japanese text. Just like the Dawn of Souls version, players are given the option to save almost anywhere with only a few exceptions. This is a nice feature, but it must be used responsibly or a player could find themselves stuck with a save file in an unmanageable location. 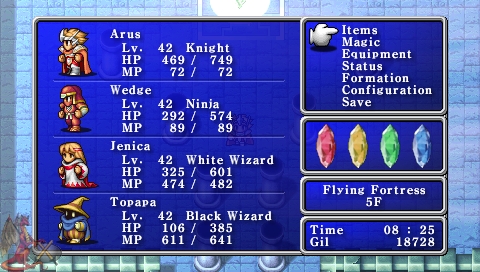 Final Fantasy PSP does contain all of the content found in its Dawn of Souls counterpart, right down to the bonus dungeons accessible as the game progresses. On top of that, this version does offer a brand new dungeon known as the Labyrinth of Time. This dungeon is found prior to the end of the game and does offer quite a challenge. Staying true to its name, everything within the Labyrinth is time based. Sacrifices must be made on each level of the dungeon in order to gain time. This could range from not being able to use magic to having the party’s attack power cut in half. Each floor must be completed within a specified amount of time or the party will be bombarded by difficult enemies. Also, players cannot save anywhere they want within the Labyrinth. Overall, this dungeon might delight those seeking an extra challenge, but to others it will just be a source of frustration.

Uematsu’s original soundtrack returns to Final Fantasy once again. This version does feature a good bit of remixing, but everything is still recognizable. One bonus is that a few select pieces from other Final Fantasy titles are remixed and featured here as well. This is a nice, unique addition offered only in this version of the game.

Far and away the best feature of Final Fantasy PSP is the graphics. It not only features the cinematic cutscenes from Final Fantasy Origins, but the style of the in-game art has been completely redesigned. Characters have been overhauled with a new look, battle backgrounds have been touched up, and dungeons and towns have a new feeling of life to them. The town of Cornelia now has clouds that pass overhead while the dying area of Melmond offers merely dust clouds. This holds over to dungeons as well with the Cavern of Ice featuring snow that lightly dusts the area as the characters explore. Though still not up to the level of realism featured in the cutscenes, the visual upgrade this version has received is quite remarkable.

With 2007 marking the 20th anniversary of Final Fantasy, the PSP’s adaptation takes players back to the beginning in classic style. With upgraded visuals and a modern rendition of the soundtrack, players who have never experienced this title are getting the most up-to-date version yet. Those who have played prior versions are not offered much in the way of original content, so the novelty ends at the new look and sound. Simply put, this is half of the Dawn of Souls package with a new coat of paint and a bonus dungeon. So, for those who never experienced Dawn of Souls on the GBA or who just cannot get enough of the granddaddy of Final Fantasy, this might just be for you.