A passable port of the classic Super Nintendo RPG, Final Fantasy IV Advance makes some minor changes, but is still largely faithful to the original. A number of bugs, translation errors and a combat system that has not aged gracefully do mar the experience, but overall, it is a game worth playing. For those that missed out on the original SNES version and its subsequent PSOne re-release, Final Fantasy IV Advance will be a brutally traditional experience. The extras included in this release go some way towards relieving the game’s intractable elderliness, but in general, Final Fantasy IV Advance is about as traditional an RPG as you can get without actually picking up a Super NES controller.

The combat system runs in pretty much the same fashion that Final Fantasy‘s Active Time system always has — each character has a timer, and when that timer fills up the character may take a turn. Final Fantasy IV Advance takes a slight turn away from the original by making the ATB meter visible instead of hidden, but other than that, it’s exactly as it was. Overall, the system is very, very simple. Each character has a very specific set of skills that are learned at level-up, and there is no character customization beyond obtaining stronger equipment. Though the simplistic nature of the system may appeal to some gamers, there are a number of flaws which make it somewhat irritating to play, the first of which is balance. Final Fantasy IV Advance has the irritating habit of giving the player one or two characters with skills far in excess of their current levels — characters with 90 MP who can cast Firaga, Blizzaga and Thundaga, which cost 30 MP each — and then expect to see those skills used regularly. The game simply does not take MP cost into account when balancing — Rosa is expected to cast Curaja literally every turn in some of the later dungeons, where Ethers are in very short supply. One unique flaw, however, is the habit this game has of occasionally granting a character a turn well before their ATB has filled up, sometimes just after taking their previous turn. Unfortunately, this is a rather serious bug as it has the potential to defeat the balance of the game, an aspect which was not particularly stable to begin with.

Similarly, the interface is a bit sticky. The game doesn’t respond quite fast enough, and can have a delay of almost a full second in combat. Other than that, the only real issue to speak of is a small number of translation errors, all of which occur outside the scope of the main script. On the plus side, Final Fantasy IV Advance features a very useful quicksave feature, a re-written translation which is a bit better than previous efforts, and the ability to select what party goes into the final dungeon. On top of this, Square Enix has added an epilogue of sorts to the game by opening up a 50+ floor dungeon for players who complete the game. Overall, the new additions improve the game without getting in its way. 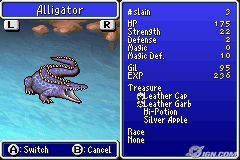 This version includes a Bestiary and a sountrack player as bonuses.

The music of the early Final Fantasy series has long been considered some of composer Nobuo Uematsu’s best work. While the sound quality is not perfect, Final Fantasy IV Advance shows off Mr. Uematsu’s work to good effect. The soundtrack is as powerful as ever, and the inclusion of a soundtrack player is a welcome addition. The sound effects are a reasonable lot, though the sword-slashes do get a bit dull with time.

The story of Final Fantasy IV focuses on a battle between Light and Dark, and like the combat system, it’s about as simple as you can get. Most mainline-plot characters are reasonably well-developed, but have been copied by so many other titles in the genre that they have been rendered cliche. Cecil, the heroic Paladin with a strong sense of duty, Rosa, the loving White Mage, and so forth. It can hardly be held against the game; can The Lord of the Rings be blamed, for instance, for being cliche High Fantasy? Nonetheless, it can be hard to get into the story when it feels as though the plot is a re-hash. Taken by itself, the story of Final Fantasy IV is decent. Most, if not all, of the secondary characters recieve far too little development, and the game exhibits more than just a small amount of Deus Ex Machina. Still, the characters are likeable and the story has a solid message that remains faithful to the original. 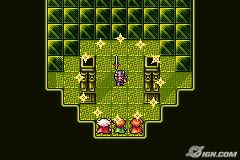 The best part of FFIV is still its plot.

Visually, the game has received a minor upgrade from the PSOne release, and has been slightly modified to run on the GBA’s screen aspect. Overall, the visuals make a very solid transition to the small screen, and although the game looks very dated by today’s standards, the style and flair of the original has been kept intact. Of course, the original had it’s problems — Yoshitaka Amano’s character designs were never particularly suited to the pixel forms they ended up in — but by and large the game looks reasonably good.

Depending on the level of patience and willingness of the player to spend time level building, Final Fantasy IV Advance can be a reasonably easy game. The new additions can add a bit of difficulty to the game, but, being optional, what they mostly add is time. Where the original took 15 – 20 hours to complete, Final Fantasy IV Advance can take between 20 – 30 hours thanks to new sidequests and the Lunar Ruins epilogue dungeon.

Although Final Fantasy IV Advance is about as traditional an RPG as could be hoped for, what with its High Fantasy setting, turn based combat system, and linear plot with most of the cliches of the genre in full force, it should be remembered that in many ways, Final Fantasy IV was the game that helped make them cliches. Its rampant popularity spawned a host of fantasy RPGs lead by holy warriors, and although the imitations have diluted this game’s effect to a certain extent, it is still an entertaining and worthwhile experience. It is a testament to the quality of the original that, even after more than a decade, Final Fantasy IV is still a title worth playing.