Theater of the Deranged

Fate/EXTRA could cheekily be described as combining the worst parts of a Persona game with the best parts of rock-paper-scissors. This description isn’t far from the truth; nevertheless, the game is more enjoyable than the off-the-cuff description suggests. It’s still not a great game, but the characters and thematic concerns work overtime to bring clumsy charm to an uninspired system. How well they succeed depends on one’s love and tolerance for sexual innuendo, repetitious gameplay, and existential musings on the nature of conflict and humanity. The final score reflects ambivalence toward the former, bitter acceptance of the repetition, and appreciation of the story’s wider themes.

Fate/EXTRA‘s story starts with a clever twist. However, saying anything more about the plot requires spoilers for the first hour or so. Skip to the next paragraph if the burden of truth will prove to be too much. After a delightful bait-and-switch prologue where, in an act of gnostic transcendence, reality slowly disintegrates around the protagonist, the story gels into a straightforward affair. Futuristic wizards compete for possession of the Holy Grail in a computer simulation of a Japanese high school. 128 Dumbledores enter, one spirit hacking magus supreme leaves in triumph. The organizers of the Holy Grail War pair each Master with a Servant — a fictionalized, sexed-up version of a historical figure — to do the heavy lifting. As the Master and Servant bond emotionally, the Servant is able to unlock deeper reserves of power. Since Masters and Servants tend to have contradictory personalities, much of the game’s drama stems from their attempts to understand one another. Three different Servants are available, each of whom leans toward a different play style. The central story is the same regardless of the Servant chosen, but since the relationship with one’s Servant is so important to the Holy Grail War narrative, the New Game+ feature seems like it’ll get a lot of use.

Despite Fate/EXTRA‘s status as a spin-off game, prior knowledge of the Fate/ series or the wider Type-Moon universe isn’t necessary. Fan favorites from earlier games fill many of Fate/EXTRA‘s roles, but they only rarely distract from the self-contained story. Putting up with a knowing wink once in a while could become annoying, but here it doesn’t overstay its welcome. One possible reason is Fate/EXTRA exists in a different continuity than other Type-Moon games. The Shinji you see is not the Shinji you know!

The bulk of the game is spent in one of two places: the training arena or the rest of the school grounds. The arena is where the “worst parts of a Persona game” comment applies. Although the transparent dungeon walls reveal a brightly colored backdrop, it’s sparse window dressing for the repetitive corridors. Every floor draws from the same palette-swapped stock of rooms, passages, switches, and stairs. Monster design is similarly limited. Secret passages and treasure chests encourage a small degree of exploration, but it’s of the running-into-walls-until-one-of-them-gives sort. 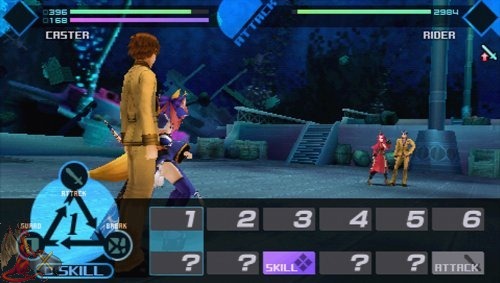 Early battles on each floor of the arena are unforgiving. Every round of battle is split into six segments, during which the player’s Servant can attack, defend, break, or use a special ability. Attacks beats breaks, but get countered by defending; breaks crush defense actions, but aren’t fast enough to stop attacks. Special abilities beat everything except for other special abilities, but draw from a limited pool. Picking the wrong choice in this rock-paper-scissors system deals damage. One bad round can easily lead to a quick game over. Sometimes there are context clues to help out (e.g. the guy made out of shields defends a lot), but often it comes down to luck and staying well-healed. The difficulty curve smooths after several battles against the same enemy type and more of their moves are revealed in advance.

Thankfully, navigation in the arena is handled excellently. Rotating the camera’s a breeze, and the boring, transparent nature of the walls means never being lost behind an opaque blob. The mini-map is likewise easy to call up and expand. This blessing extends to the schoolyard side of the game, where it’s possible to instantly teleport to the most important areas of the school.

Exploring the schoolyard unlocks sidequests, story information, and provides chances to learn information about enemy Servants. Discovering the history of an opponent makes their combat patterns easier to predict. The detective work is an interesting take on the Hunger Games/Battle Royale formula. While hunting for clues never extends beyond revisiting the same handful of rooms and talking to everybody, the slow reveal of each Servant’s identity is an enjoyable piece of plotting.

Taking a step back from the game for a moment, the high school setting doesn’t make a whole lot of sense beyond the initial plot twist. Since the participants in the Holy Grail War are maguses and hackers from a multitude of backgrounds, the question “Will you kill your high school friends?” never quite pans out. They’re soldiers forced into simulated sailor suits for reasons only barely hinted at. The genre muddling ultimately gets in the way of the more interesting questions posed: “Will you kill as a soldier in a war?” and “How do you choose to define yourself in the context of human conflict?” 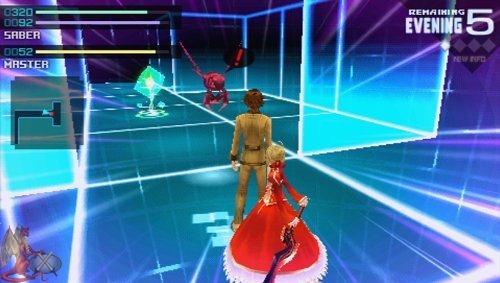 Better open that chest or Saber will be mad.

One of the central mysteries in Fate/EXTRA is how the protagonist is able to justify killing strangers to attain the Holy Grail. Since the main character is such a blank slate, the choices offered are of the utmost importance in making the journey feel like a lived, worthwhile experience. In practice, these choices are a mixed bag. Many are only a step up from the “But thou must!” non-choices of RPGdom’s early days. Characters respond to these empty decisions with unique text, but the story’s path doesn’t change in any appreciable way. There’s something to be said for a player using his or her imagination to create an internal representation of a character, but drawing from this well too frequently just leads to uncritical apologies for mannequin-like silent protagonists.

Fate/EXTRA saves itself from silent protagonist stagnation by having some choices that really matter. A few decisions impact events later in the game, while others quickly lead to dead ends — out of combat encounters that end the game. Running into a dead end and having to replay a story section is annoying, especially when it happens deep in the arena. On the other hand, it’s difficult not to give the game credit for adding an extra degree of danger to the decision-making process. Furthermore, exploring the arena requires new strategies to accommodate for exploring everywhere while still playing it safe enough to survive.

The localization helps the story move along despite the weak protagonist. The three core Servants and the challengers in the Holy Grail War have strong, memorable voices. For such a short game there’s an abundance of text, and most of it’s good. Copy-editing errors never quite leave the script alone. As always, this is unforgivable. The vocal work is left in its original Japanese and fits the characters without going above and beyond the call of duty.

The same could be said for most of Fate/EXTRA. It’s a serviceable package, but could have been so much more if its mechanics matched the sweep of its story and the story didn’t wear itself out on tangents. The participants in the Holy Grail War are nuanced, cleverly designed characters, but they gutter and die before becoming truly awesome.