Founded at the beginning of 2011, Pixel n Texel is a two-man game development team with experience on such titles as Orcs and Elves DS and Wolfenstein RPG. Fara, their first published iOS title, showed great potential in its pre-release trailers and artwork. With a literal plethora of titles available for iOS, I jumped into Fara hoping for the promise it showed to deliver a satisfying RPG experience. 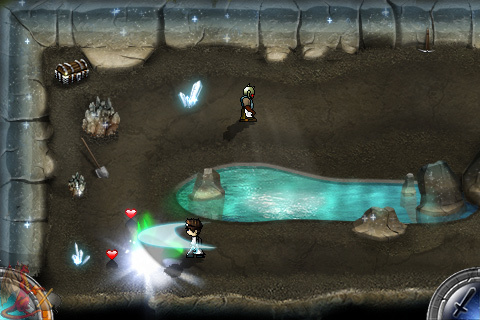 It’s amazing how strong blobs of goo can be.

The tale of Fara begins in a manner similar to Out of This World and Secret of Evermore — a scientist is returning to his base camp with a mysterious artifact and is suddenly transported to a world very different from his own. Upon arrival on the island of Fara, he finds his hand fused to the artifact which is now revived as a sentient, talking blob that, conveniently, takes the physical form of a sword. It is then up to the player to guide the scientist, a supposed “hero of prophesy,” in his quest to return home. While Fara initially presents itself with the promise of a decent story, very little light is shed on the prophesy or the mysterious blob creature. Additionally, while the player will meet a good number of characters, few contribute anything to the story and serve the sole purpose of getting the player from one fetch quest to another.

Though Fara is classified as an action RPG, it plays more like an action-adventure title. The hero can be controlled using virtual thumbpads or by tapping and dragging on the screen to perform actions and, in a few rare instances, be moved about the screen by tilting the iOS device. While players will eventually be able to make use of three different pieces of equipment and a small selection of healing and status boosting items, nothing else about the character changes. Hit points, strength, and defense do not increase, there are no character levels to raise, and the closest thing to an MP bar is a charge gauge for one of the three tools. This lack of character growth may lead to some frustration, especially during the first few minutes of the game, where inexperience with the controls can easily lead to a number of deaths. Fortunately, death carries no penalty other than the current map reloading in the same state it was entered in. Additionally, though players will find their hero to be static, they will also find that enemies follow the same trend. While each area has its own set of opponents with their own attack gimmicks, only bosses require more than two hits to dispatch. 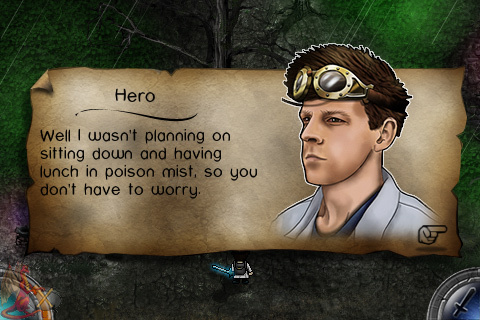 Our unwilling hero…shouldn’t he be wearing his goggles with all that poison mist?

While it certainly won’t win any awards for visual or musical excellence, Fara presents a world with solidly average music and visuals hailing from the 16-bit gaming era. Character and monster sprites are on par with what would be expected from a Super Nintendo or Game Boy Advance title, though the background graphics look a good deal better. The musical score is decent, but feels at times like it belonged back in the 8-bit era. Overall, there isn’t much to complain about in the visual and music departments, but there isn’t a whole lot to brag about, either.

As far as challenge goes, Fara doesn’t have much of it. As previously mentioned, most enemies can be killed with one to two hits and nearly every attack can be avoided by standing at a diagonal from the attacking opponent. Even the slightly harder boss fights are made trivial by the vast pile of gold accumulated during the game that can be used to purchase enough healing items to last through ten such adventures. While a few of the game’s achievements appear to be unobtainable due to bugs at the time of this review, RPGamers should have no difficulty completing Fara and all of its achievements in under two hours.

From its trailers and screens, Fara promised an epic role-playing adventure in a beautifully crafted world. In actuality, Fara produces an extremely short adventure game with average music and visuals, insufficient difficulty and story, and hardly any RPG elements. While some RPGamers may find Fara to be a worthwhile use of two hours, most would be better off leaving this unwilling hero stranded on that island to fend for himself.