It’s a story told many times before: Lucifer rebels against the Heavenly host and is sent to Hell for his wicked ways.  In this instance Lucifer doesn’t take this laying down and invades the heavenly realms to find the other archangels fighting and God missing.  This sets the stage for Matrioshka Games’ Fallen Angel.  The fast-paced and enjoyable top-down action RPG adopts a non-linear mindset, leaving plenty of freedom for players to decide in which order to tackle each archangel’s realm while playing as Lucifer.  Unfortunately, the challenge often feels unfair due to performance issues, as deaths lead to long load times and inconsistent frame rates that make the experience uneven.

Fallen Angel doesn’t have much use for story.  What story there is comes via a few lines of banter between the archangels and Lucifer as he reaches their boss arena or meets two friendly NPCs along the way.  The war has made the archangels’ individual quirks more pronounced, with Raphael turning his version of paradise into an all-night rave for example.  This makes each archangel feel unique.  Both NPCs found add bits of exposition about the war then return to serve as shopkeepers in the Kingdom Come Hotel that serves as the main hub for Lucifer.

Lucifer begins in Purgatory and climbs through various realms, eventually reaching the highest point in Heaven.  Progress is marked by waypoints that are found in each realm.  The full map is available from the start, with the basic direction to the next realm displayed and each waypoint a question mark until it has been reached.  Being able to plot a course through the realms or jump to the other end of the map gives freedom to accomplish the task of taking down all the archangels in a non-linear order while exploring.  Along the way, Lucifer will be attacked by the inhabitants of Heaven as well, beings of mechanical, celestial, or human backgrounds.  Generally speaking, there’s little variety of basic enemies in each realm, which makes mowing them down feel plain but adds greater emphasis on the care that went into boss designs. 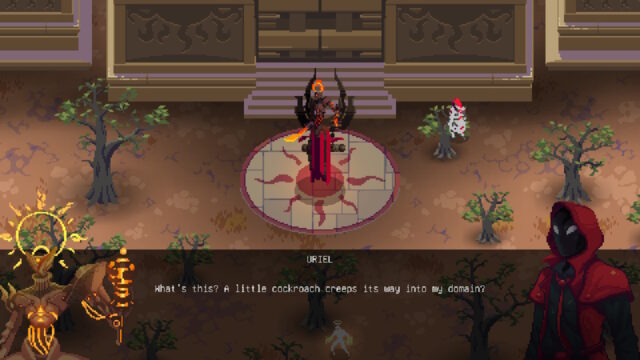 Lucifer is hiding behind a shrub because Uriel is a really relentless boss.

Lucifer starts off with only a sword, but will obtain a variety of ranged weapons to complement it.  A variety of guns can be found spread around on pedestals, each with a different effect.  All guns use ammo shards, which are dropped by enemies or found in boxes, but run out rather quickly.  Ammo shards also act as currency used to purchase healing cores and accessories, which are dropped by enemies, found on the map, or offered as reward for clearing out waves of enemies in certain sections.  The archangels drop weapons or shields that have their own cooldowns of around ten seconds as a way to get around having another set of ammo to collect, giving players a consistent form of special attack if low on shards.  Lucifer can equip and cycle between his default sword and three additional weapons.  In addition, killing enemies fills a Pride Meter that turns Lucifer into a faster and stronger demonic form for a short time, which can help provide a vital last-ditch chance against a boss or group of enemies.

Flying is important to the game’s strategy and short platforming sections.  Enemies encountered can be aerial or grounded, and flight gives the ability to attack or defend on a different plane, or dodge enemy attacks that can’t be avoided otherwise.  Players are free to glide or drop during flight as they wish.  Platforming boils down to precision flying to land on floating platforms or climbing the occasional rock face.  Between flying and shadow dashing, movement is a joy, with the verticality letting players rain down attacks or juggle enemies in the air, and is a lot of fun while providing welcome variance to the melee strikes.  However, gliding to small floating platforms can get tricky as Lucifer can be knocked over a ledge by enemies when landing, pushing him back to an earlier point in the realm. 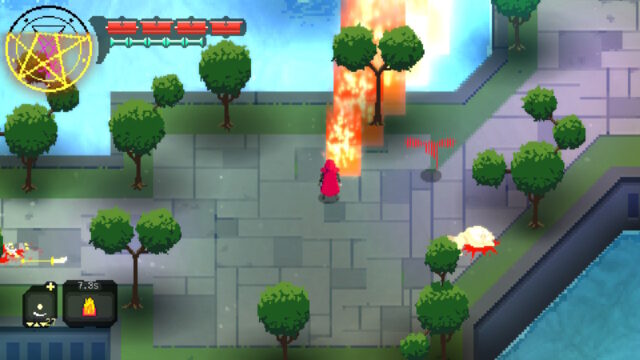 One of the special weapons gained is a burning wall of fire.

There are no experience points or skill tree, so Lucifer gets more powerful through accessories and obelisks.  Accessories alter attributes, sometimes with risky trade-offs like taking more damage in exchange for massive attack power increases at low health.  They also make it easier for each player to find their preferred combat style, though a mix of melee and ranged combat seems to be the most effective.  Melee is fluid and easy to use, with a shadow dash ability to help dodge incoming strikes, and ranged weapons have more variety but take a bit of timing to aim.  Obelisks work similarly to a skill tree but have to be found while exploring and can add additional abilities to melee attacks such as an uppercut that allows players to launch enemies and juggle them, or the aerial smash that’s used when flying to slam down on foes.  Obelisks can also provide stat increases or other perks and and make it worth it to explore each inch of a realm to see if one is nearby.

Fallen Angel doesn’t pull its punches on the player.  While progression is open, it feels like there’s a preferred order to the bosses.  While exploring, certain archangels felt stronger and backtracking was needed to go down other routes to collect additional accessories and weapons.  Archangels all have a unique set of attacks and patterns that can be recognized through trial and error, giving plenty of ways to take them down.  Still, the archangels always have a few tricks up their sleeves to shift players to the defensive.  This back and forth makes boss fights engaging and a joy to learn.  Some regular enemies have specific weaknesses, with one instance featuring an enemy whose shield can only be damaged by grenades.  This causes a problem because the grenade launcher is an optional weapon, making this particular enemy invulnerable and having to be avoided.

Fallen Angel feels at home on the Switch, with controls and gameplay being fast and fluid.  The game suffers from long load times, often in the ten-to-twenty-second range.  Frame rate also dips when entering new areas, sometimes lasting a few seconds, though it stabilizes more the longer a play session lasts.  Luckily, save points are plentiful and close enough to boss arenas to not cause too much issue getting back to the archangel.  How much these issues affect gameplay is up to each player, as the game clocks in at around six hours even with multiple deaths. 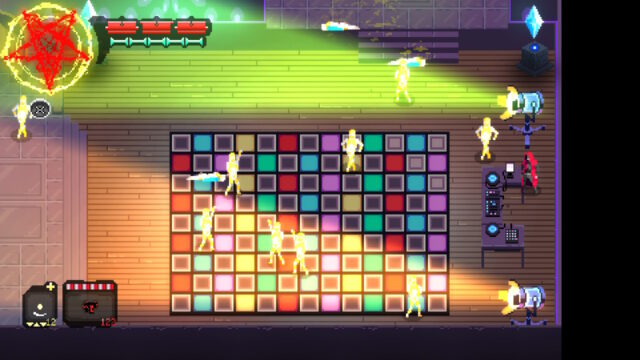 There are a lot of little visual details that add to the experience.  Each archangel has a unique look and their own theme in the soundtrack, making each feel like a spectacle.  Some realms shine visually, with Raphael’s rave club and Ramiel’s mechanized facility being standouts.  A standout track for nostalgic gamers is the theme of the Kingdom Come Hotel, as it sounds reminiscent of tracks found in places of respite from the 8-bit era.  Due to how little dialogue is in the game the voice acting feels unnecessary and is often drowned out by the background music of the realm.

Although Fallen Angel suffers from some annoying performance issues and long load times when reloading after death, it also does some things right. Its archangels are infused with lots of detail, such as their character designs, fighting styles, and musical themes. The enjoyable challenge of boss fights is underscored by fast-paced combat and the joys of fully exploring each realm, and the brisk-paced runtime of less than ten hours makes this version of Lucifer’s rebellion a game that’s worth trying out.