Compile Heart has been gaining notoriety as one of the more prolific JRPG developers of games not necessarily worth the initial investment in recent years, though a few of its releases have been pleasant surprises. Thankfully, Fairy Fencer F on the PlayStation 3 is in the latter category and at the moment seems likely to be the title best able to garner more widespread appeal for the company. It’s a game that goes part of the way towards pushing Compile Heart titles into achieving a much wider appeal to RPGamers, but there’s still a lot of things that need work.

The setting for Fairy Fencer F focuses on the familiar premise of a past battle between two gods. The Goddess and lazily named Vile God ended up managing to defeat each other simultaneously, with each left dormant under the binding of magical swords called Furies that house mystical spirits known as Fairies. A number of these swords, however, missed their targets and ended up scattered across the world. Those who are able to find and wield a Fury conjure up a physical manifestation of the Fairy and become Fencers. The Fencers are generally tasked with collecting as many other Furies as possible; the eventual goal is to use them to unbind and revive the deity of their choosing, usually with the promised reward of a wish being granted.

The game starts with main protagonist Fang asleep in a prison cell, and the clichés of unambitious Japanese storytelling just roll from there. Fang himself starts off as a selfish, food-obsessed jerk, but thankfully becomes much more likeable as the game goes on, albeit keeping the food obsession. The other Fencers and Fairies that join Fang throughout the story are likeable as well, providing plenty of entertaining interactions, although they’re certainly not the deepest characters in the history of fiction. 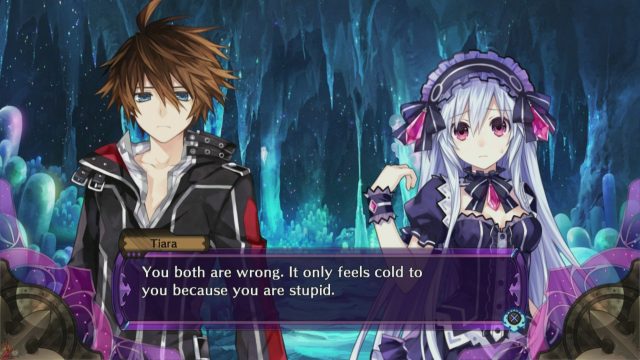 The lack of depth continues with the antagonists, who primarily belong to a massive corporation that is universally beloved for its do-gooding public services. However, as anyone familiar with how these things go will immediately realise, the corporation is hiding nefarious goals. There isn’t much reasoning given for these nefarious actions outside of being the designated bad guys, although the motivations of the final boss have some, sadly unexplored, depths. There is the use of time travel, which may frustrate players due to its apparent main purpose of extending things by means of throwing players back into all of the dungeons again, but it works well enough within the narrative thanks to straightforwardness that stays away from paradoxes. Despite these issues, and a distinct lack of originality in the story, the game manages to hold enough interest, mostly thanks to the interactions of the protagonists and a self-awareness that it’s not doing anything outside the box.

Fairy Fencer F‘s battle system is a very solid effort. Earlier Compile Heart titles could take an age to get through even the most trivial encounters, but that’s certainly not an issue here. Things move along very quickly, especially with the L2 button immediately skipping all types of animation, a welcome feature as the longer animations can get redundant quickly. Positioning plays a part, with each character able to move within a certain radius before undertaking an action. There is a semi-circular bar above each character’s portrait that rises with certain battle actions, and when this reaches a certain point the Fairize option is unlocked. This begins a transformation sequence, which provides significant boosts to attack and defense along with allowing access to a special attack, yet is started by the bizarre sight of the Fencer stabbing his or her own body and somehow producing mecha-like armour. This status lasts until the aforementioned bar is sufficiently reduced by enemy attacks or other actions.

The biggest problem holding back the battle system is its singular difficulty setting, which contains a distinct lack of actual challenge. A few challenges can be found if players happen to be significantly underlevelled for an encounter, but the basic tactic of relying on combo attacks interspersed with healing and the occasional special ability will be more than enough to succeed. Levelling isn’t much of an issue; players should find themselves perfectly fine just going through the dungeons without extra preparation, but spending a bit of time grinding is an easy proposition if required. There is a lot of depth to the battle system, which is a ton of fun to actually use, but the excessively low level of challenge means most won’t have any reason to explore it fully.

Character growth in Fairy Fencer F follows a similar system to those used in previous Compile Heart games, with each battle granting a number of points that can be spent on various upgrades for attributes and skills. Characters are forced into using their original Fury as the primary weapon, although it can seemingly be used in a multitude of ways, such as a sword and scythe, during standard attack combos. Players have two slots in which to employ equipment, with an extra costume and accessory slot for desired appearance changes. Each character can also equip one of the additional Fairies that are collected throughout the game. These Fairies provide additional boosts to attributes as well as passive elemental, immunity, or regeneration abilities, with further ones unlocked as they level up. Character progression is also a reward for a multitude of actions undertaken throughout the game, which frequently provide permanent attribute bonuses for actions such as causing damage, jumping, or even spending time on the sidelines. 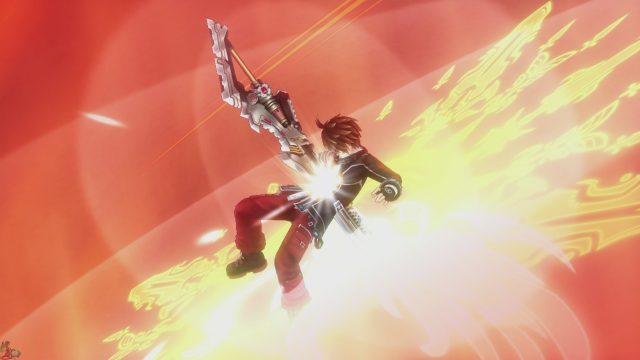 Dungeons are all mercifully short considering their general lack of interesting features, relying on the battle system to provide most of the enjoyment. Most consist of between one to three medium-sized sections, maxing out at five in a couple of cases; all possess a single save point just before the dungeon’s boss. Dungeons can be somewhat customised by stabbing Furies, and the Fairy housed within, into the world map, which can cause a number of effects such as boosting magical attacks or changing the enemies found inside. The limited amount of exploration available is made interesting enough with various treasure chests floating around, even if their contents are simply healing items. While the dungeons are certainly far from being creative, at least the themes they display offer plenty of variety.

Sidequests typically involve collecting additional Furies through repeating a dungeon to face a different boss at the end, though there are also item gathering and kill requests available from the tavern. Tavern requests are given depending upon their quest rank, which is enhanced by completing a specific quest when it becomes available. Unfortunately, these rank-enhancing quests often require particularly rare item drops, so players are required to be either very patient or lucky. Most will find it easier to just ignore these after the first couple of ranks, especially as the rewards never seem that interesting or necessary. A New Game Plus option allows players to carry the majority of things over, such as levels, skills, and money, but fails to provide any difficulty upping option, making everything in the main story go by at even more outstandingly minimal levels of triviality. There’s also a basic crafting system that upgrades the item store, but as with other parts of the game, it relies too much on luck and is far from necessary to help with completion of the story.

The soundtrack is primarily handled by Compile Heart staple Kenji Kaneko, doing some of his strongest work yet. The remainder, still a hefty chunk, is composed by assorted members of the Earthbound Papas, with Nobuo Uematsu himself composing a single track. The end result is an enjoyably upbeat listen, although it could’ve done with few more battle themes and power-up songs to loop through. Voice acting is solid on the whole, doing a good job with a passable script, with Galdo’s excessive use of a very Canadian “eh” being the only notable black mark. The visuals are pretty mediocre, however. Dungeons aren’t all that interesting, and palette-swapping is used quite extensively. Fairy Fencer F keeps the visual novel-style of talking portraits for most scenes, with the usual Compile Heart breathing animations bringing some natural movement rather than static figures. The character and background art is pretty passable, while the 3D graphics used for exploration and battles, and a few key story scenes, are definitely on the mediocre side. Battle attacks are fluid and interesting to watch the first time around, but get repetitive quickly.

Fairy Fencer F is an enjoyable way to spend the roughly twenty-five hours it takes to complete. Those hoping for something that provides a grandiose journey, everlasting appeal, or a decent challenge won’t find it here, but for those looking for some quick turn-based battling and some enjoyable light-hearted character interactions to wile away the time could do a lot worse. It’s another small step, but Compile Heart is still heading in a positive direction.