In the Time Without Caesar

Developer Logic Artists has found itself an interesting niche in RPG development, combining classic strategy and choice-driven RPG gameplay with historical settings. In its latest entry of the Expeditions series, the developer elected to take on the challenge of the late Roman Republic. Expeditions: Rome turns out to be a much stronger game than anticipated going in, managing to find a gratifying balance between all of its elements as players make their name in an alternative version of history.

Expeditions: Rome begins during the consulship of Lucius Licinius Lucullus and Marcus Aurelius Cotta and the Roman Republic’s Third Mithridatic War against the kingdom of Pontus in Asia Minor. Players begin by creating a character, the offspring of a Roman noble, who finds themselves fleeing the city after their father is murdered and their villa falls into the hands a rival family. Fortunately, Lucullus is a close family friend and they are able to join the newly-formed Legio Victrix, making a name for themselves while biding their time to return to Rome and reclaim their family estate.

Though taking a certain amount of artistic licence, the game heavily references history and many important real-life figures — including Cato, Cicero, and Cleopatra — play significant roles. Its timeline splits from the historical one very quickly as the presence of the player character results in a famed future general not being able to make their well known mark on history. This ultimately allows the player to fill in a similar role themselves, with enough changes and role-playing opportunities to keep it highly engaging. Five trusted companions help players throughout three major acts and a conclusion, during which they lead Legio Victrix in military expeditions through Asia Minor, Africa, and Gaul. 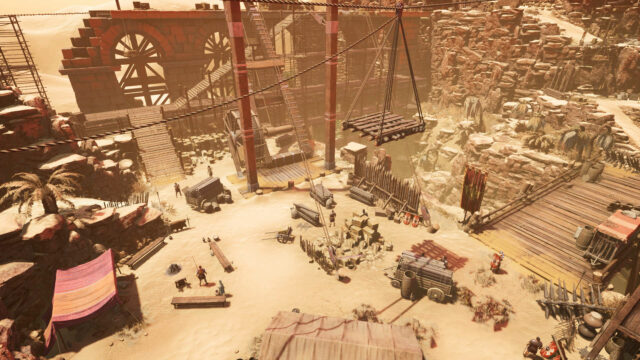 Players take their legion to Asia Minor, Africa, and Gaul over the course of the campaign.

The rights of women in ancient Rome provides a noteworthy challenge, especially given the option to create a female player character. Expeditions: Rome aims to strike a balance between letting players challenge attitudes and rules while being reflective of them. There are references and story elements built around the expected role of women in Roman society. Players are surrounded by characters happy to use the resources at their disposal without their attitudes to the role of women seeming to have any impact on wider society.

Expeditions: Rome simplifies the issues plaguing the republic that ultimately lead to the empire, giving the game a more personal story following the ambitions of its original characters, including the player character. However, it feels like this works to the game’s benefit and better fits its act-based structure. It allows players to shape their own character’s belief on what Rome represents, and there are many opportunities to make world-altering decisions long before they first reach the Rubicon. The writing is strong and all of the party members receive their own personal stories and motivations, with a decent selection of romance opportunities for players who wish it, ensuring that the narrative remains engaging.

During each act, players are tasked with using their legion to conquer the region’s sectors, with new story missions given out once a sufficient number of sectors are taken over. Players first need to scout the region with their party in order to identify the outpost that needs taking over to conquer each sector. While exploring, players will come across loot crates as well as resources that their legion will want to gain control of once they’ve pacified the sector, and will also encounter plenty of events and potential decisions that can benefit the player or be to their detriment. 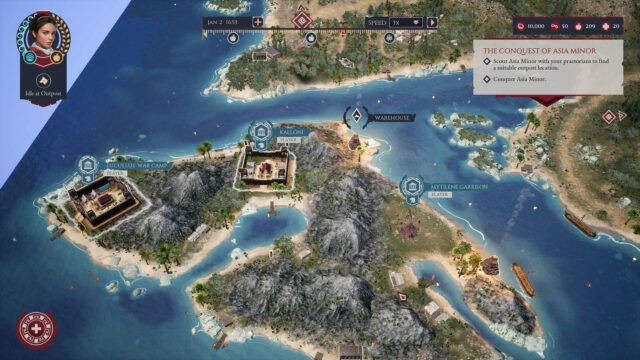 The strategic map is where players explore and send their legion on conquests.

Legion battles occur when trying to take over an occupied outpost or resource, using their own largely automated system. Players select a centurion to lead the battle, and as it goes on both sides will lose fighters based on numerous factors including commander abilities and legion morale. At the start of each of the four battle phases, players can select one of three drawn tactical strategies to deal with an event for that phase, which usually comes with a trade-off: for example, throwing pila on first contact will reduce the enemy manpower but also lower the legion’s defence. A bar at the top indicates which side is set to emerge victorious, and also indicates the point where an enemy army will be fully destroyed rather than retreating should it lose.

Once an outpost is taken over, players will need to pacify a region by completing an additional mission undertaken by their party or the legion. Once the sector is pacified, players start laying claim to its resources, which are used for legion camp upgrades such as improved crafting or recruiting options. Enemies will semi-regularly go on the offensive, though players are given a warning and some options to impact the assault or slow it down while they move their legion back to garrison the target. Meanwhile, players have four resources to keep track of — money, food, medicine, and slaves — which are used for different elements, though the extent to which players need to worry about them largely depends on the difficulty settings, for which Expeditions: Rome offers strong flexibility. In addition to four default options, players can choose to make specific elements tougher or easier at any time, such as enemy damage or the likelihood of unfavourable random events. For the majority of time, the balance between exploring, story missions, and conquering sectors ensures a fun mixture of gameplay elements that gel extremely well together. However, it can get a bit dry once players have completed all of the available story content and all that’s left to do is conquer the last few outposts. 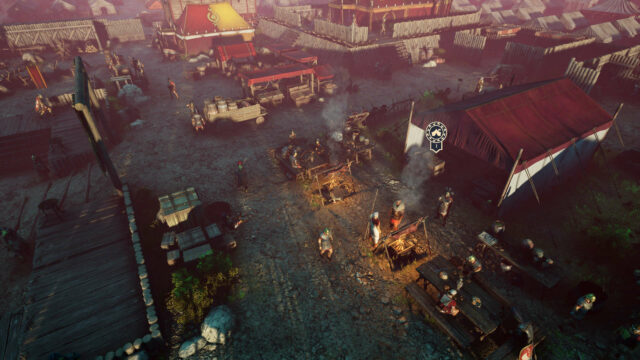 The legion camp is the player’s semi-mobile base of operations.

The hex-grid tactical combat is engaging and offers a good challenge for those who want it. Sides go in turns, with players sometimes joined by allied forces, and each combatant has a certain amount of movement and an action point that can be spent on extra movement. Each character can equip up to three regular attack actions, which are provided by their weapons, as well as up to six class skills and two items such as bandages or caltrops, with a third item slot available for things that can be picked up on the battlefield. Items have a limited number of uses before they must be replenished back at the legion camp, while some of the more powerful attacks can also only be used a limited number of times in each combat.

There is a good amount of variation in encounters and missions, including unique victory conditions for certain battles. In addition to the five story companions, players need to recruit Praetorian Guards, who act as regular party members for the purposes of combat and are interchangeable with the legion’s Centurions. Players get to deploy up to six party members for each battle, though act finales feature interesting multi-phase battles where the full party is split into multiple squads. The game encourages players to ensure that all of their party is well equipped through the pacification missions, in which a single companion is given the leader role with the remaining slots filled out by recruited Praetorians. Ultimately, the combat in Expeditions: Rome is easy to grasp but comes with lots of depth. There are plenty of ways to synergise abilities, statuses, and the environment to players’ benefit, and making the best use of all of these is crucial for more challenging difficulty settings.

Other elements that can play important roles are injuries and loyalty. Combatants who are knocked out receive an injury that will at best give them combat penalties or at worst prevent them from participating at all. Injuries can also be picked up during special events, with the player character not immune to these, and must be dealt with by a sufficiently skilled healer or by resting at camp, with untreated injuries becoming worse and potentially resulting in death. In addition, players will want to keep an eye on their party members and Centurions’ loyalty. Each character has their own personality traits and will react to decisions made through the game according to those traits. For example, humble characters will appreciate players giving credit to others for success, but arrogant characters will not. Though companions will stick with the player throughout, unhappy Praetorians may decide they no longer wish to serve them. 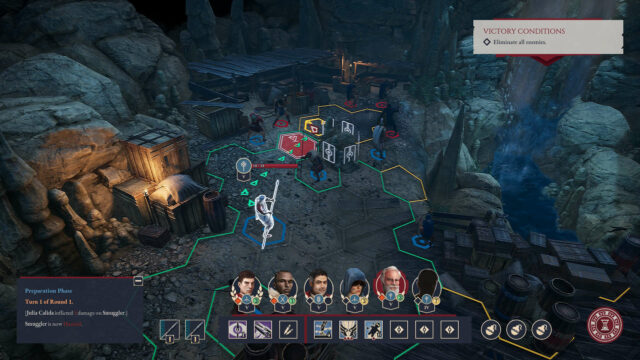 The tactical combat is solid and players have a good amount of flexibility in the difficulty options.

Expeditions: Rome features four class options that occupy traditional RPG roles, such as the tank-like Princeps. Every class has three skill trees correlating to a subclass, which players can spend a point to unlock or upgrade skills within upon each level up. In addition to the weapons that provide their action abilities, there are a number of armour equipment slots, with heavier armour generally reducing the character’s movement. The game also comes with straightforward yet engaging crafting and loot systems. These allow players to create new items or determine the skills and bonuses that their items have, but the game provides enough useful out-of-the-box loot that those who don’t want to get too involved with it shouldn’t feel obligated to.

Expeditions: Rome’s visuals are effective without being too noteworthy. The environments and architecture are pleasing, while the UI works well and gives the game a distinct “Roman” feel, including touches like using numerals for character levels. There are only a limited number of portraits, which results in some reuse across the recruitable Centurions and Praetorians. On the audio front, the game is fully voice acted with solid performances. The pronunciations of certain names and words may not be what some players are familiar with, but the game is internally consistent and one quickly becomes accustomed to them. The music and sound effects also offer effective background ambience.

For those looking for an engaging historical RPG, Expeditions: Rome is an easy recommendation. The options for tailoring the difficulty allows players to focus on their preferred elements and make it challenging, welcoming, and rewarding depending on what players want. While the game’s interpretation of Rome may simplify the issues of the time, Expeditions: Rome successfully uses its setting to create a very enjoyable role-playing experience.