As a new IP which received a significant marketing push, Ever Oasis is an unusual title among 3DS RPGs. What the curious will find when trying it out is an action RPG with considerable simulation gameplay and which is addictive for completionists. It’s hardly a towering masterpiece among all 3DS software, yet delivers a charming experience worth investigating for anyone who wondered what Harvest Moon and The Legend of Zelda would be like if they had a descendant.

The player takes the role of an inexperienced wind master, whose older brother in the opening is unable to best the nefarious power of Chaos. The protagonist is sent away from disaster with the last of the brother’s power, and encounters one of the few remaining water spirits. Chaos is drying up the land and corrupting its inhabitants, but the protagonist and Esna the water spirit are together able to establish an oasis. Attracting residents to this oasis is key to making it grow, but the forces of Chaos continue to encroach on this idyllic sanctuary.

Ever Oasis does not have much of an overarching narrative until the second half. Once the central plot starts to occupy more time, it reveals some traditional antagonists who aren’t very interesting. Much more entertaining are the small narratives that revolve around residents of the oasis, each of whom is unique and requires different conditions to recruit. Most of these individuals lack complex characterizations, yet the effort is appreciated. Time spent recruiting new residents and investigating the quests on which they send the protagonist occupies the bulk of the game, and is ingratiating enough to not feel like a waste.

Developing the oasis is not a side activity: indeed it is often required to have a certain number of residents for the narrative to advance. Getting the mandatory number is not difficult thanks to the clear requirements for intriguing a visitor enough to create a commitment, but going beyond the minimum demands a little more work. Many residents spend all of their time at a Bloom Booth producing things for sale, but these kiosks are unique to individuals and can only be created once the necessary character has joined the locale. Restocking the inventory of Bloom Booths from monster droppings and environmental spots is also the player’s responsibility, though fortunately as more characters become residents the ability is gained to restock in bulk instead of individually. Having more residents increases the variety and vibrancy of the oasis community, but it also comes with practical effects when fighting. Maximum HP is increased when leaving the oasis based on the number of residents, and this bonus HP is a great deal more than the base value can ever reach. Leveling up the oasis also provides new synthesis formulas for equipment creation, allowing more effective materials to be made than would ever be otherwise possible. 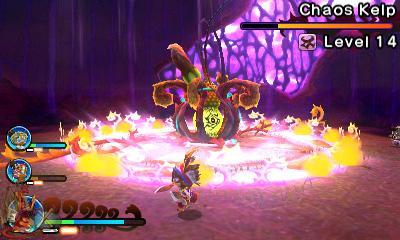 That’s actually a pretty benign version of Chaos Kelp. The real stuff is much nastier.

Bonuses are helpful because combat is often more aggravating than it should be. The central issue lies in the camera, which is zoomed in too close to the action for a good view of the action when events get hectic. The only means of camera control are centering it behind the currently controlled character and locking on to a single enemy, which just isn’t good enough when multiple foes are in the area. Knocked-out party members will eventually be resurrected at half HP if one character in the party can stay alive long enough, and automatic full-party revival is also granted after a little while. These are helpful when it comes to triumphing over the opposition, particularly boss encounters that have easily-discerned patterns yet are hard to dodge. Enemy AI is no great challenge most of the time, and a simple pattern is sufficient to triumph over ordinary adversaries, except when they have friends that keep getting in extra hits due to the difficulty of spotting them.

Ever Oasis has some puzzles in its dungeons that do something different, but in an annoying way. Each character has a unique ability, from smashing through rocks to using a crossbow, and these abilities are required to progress at numerous points. The problem is that the party can hold three characters simultaneously, and this leads to numerous occasions when the necessary ability is missing and the player must go back to the oasis. There is the fortunate ability to open a teleportation gate that will put the party back where it was, but all the back and forth gets tedious.

The simulation elements of Ever Oasis are as important as the combat, and fortunately become quite efficient. In addition to supplying Bloom Booths with required ingredients for their merchandise, the player can send teams of characters out to automatically comb parts of the game world for resources, and assign other characters to tending garden plots for other materials. The inability to hold more than ninety-nine of any item is a constraint at times, but everything necessary is presented in an efficient manner. 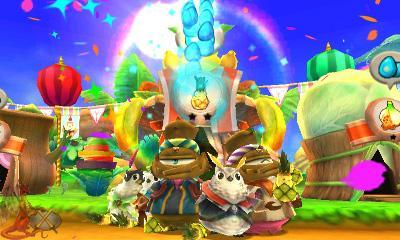 The cast of next summer’s focus group-approved CGI movie is coming at you!

This is a world with numerous desert locales, and the flora and fauna encountered do justice to that setting. The presentation isn’t something to draw looks from anyone seeking realism in a graphics engine, but depicts Ever Oasis very effectively. Quite a bit of variety in the scenery will be seen when playing, and the distinct character designs help make each one stand out.

There is no voice acting, but characters utter exclamations in battle and when addressed by the player. These exclamations are unfortunately very limited and are quickly heard too often. On the other hand, the soundtrack varies nicely and complements the onscreen action quite well. It even supplies a catchy second regular battle theme in the later part of the game, by which time the starting composition will have worn out its welcome.

Many times while playing Ever Oasis I wanted to improve my settlement, which is an addictive pastime. Tracking down all the recruitable characters is a task that must be pursued into the post-game period, and I’d like to continue doing so. The game isn’t all about building up the oasis though, and the combat engine isn’t enough on its own to entice players. This is still a charming title though, and worth investigation by the many players who haven’t attempted it yet.