Are You Up for the Challenge?

Etrian Odyssey is a dream come true for those that love intense challenges, open-ended game play and lengthy level grinding sessions. The whole game is a series of challenges that will leave the player threatening to throw the DS around in frustration. That being said, it is not for the faint of heart.

Etrian Odyssey is simply a dungeon crawler. The main focus is on fighting the numerous enemies that confront you while exploring a vast and terrifying maze. Because of this, the story progresses very slowly and for large portions of the game it is pretty much non-existent. The story is told in three ways: by accepting and handing in missions for the Guild, by accepting and handing in quests and upon entering certain points in the Labyrinth itself. All in all, the story is just not going to captivate the minds of the players.

The characters are not pre-designed for the player. Instead, the player is given control of a guild and can shape it however they want. Parties of up to five players can be formed with a few extra characters that can be used as reserves. Character creation is done in Etria’s Guild Hall as well as party formation and management. At the start of the game, the player has access to the Protector, Survivalist, Landsknecht, Medic, Dark Hunter, Alchemist and Troubadour classes. Later the Hexer and Ronin are added to the roster. Each class fills different archetypes found in almost all fantasy RPGs and have their own strengths and weaknesses. The choice of characters in a party can greatly influence the game — some classes are better suited for some situations and not so much so for others. The player must either work with the weaknesses of their party or spend the extra time to keep worthy extras to switch in when needed.

Etrian Odyssey relies heavily on level grinding. Some of the challenges can be overcome simply by leveling past a certain barrier, while some need to be overcome by equipment choice or by strategy. A single level not only increases the character’s stats, but also gives them a valuable skill point. A character’s stats play a heavy role in battle and every little bonus helps. Alongside the importance of leveling to improve stats, the acquisition of better equipment is a must, as the improvements are very noticeable. The player will spend a good portion of the game discovering what weapons and armor are best for their characters.

A character is customized mainly by their skill set. They each have a set of skills that can be chosen to further power them up. The skills range from simple passive skills that increase hit points or attack power to spells and combat abilities. There is an interrelationship between the various skills and most of the better ones have prerequisites that must be met. A skill can be leveled a total of ten times — a level ten skill is many times better than a level one skill. Higher level abilities tend to be faster than lower level ones.

There are many ways to focus a character, but mistakes can be made. In such a case, the Guild Hall has options to reset a character’s skills at a cost of losing ten levels, or to retire the character completely. The latter option is interesting when the player doesn’t like a party member and wishes to replace them in the lineup, such as when the Hexer and Ronin are unlocked. A retired character passes on some of their experience to the new guild member which in the game means more skill points at level one. This is an interesting system that allows characters to be more powerful than starting characters at the maximum level.

A character’s skill points can also be spent on harvesting skills. These skills allow the player to take advantage of mining, gathering and lumberjacking nodes found throughout the dungeon. At such points the player can pick up both ordinary and rare items that might not be available elsewhere. These items along with those found on the corpses of monsters, can be used to create new equipment. The local shop does not have an inventory of its own, but rather relies on the party to find items with which they can forge new inventory. Much of the game will be spent gathering these trophies to expand the list of available equipment. Towards the end of the game the player will be able to track down and slay rare and powerful monsters to obtain the required items for powerful weapons and armor. Some will also consume the rare ingredient and require that the player track down another one should they wish a second piece of that equipment. 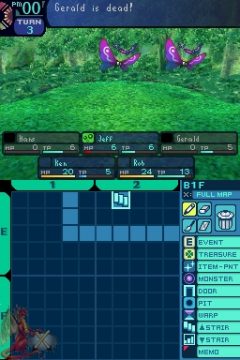 The battles in Etrian Odyssey are pretty straightforward. They are reminiscent of the earlier Dragon Quest titles, as they are turn-based, the characters are always invisible to the player, and the attacks are simple effects shown over the images of the targets. The characters take turns according to highest agility, taking into account that some abilities either speed up or slow down the action.

The enemy AI can be a touch cruel for the majority of the game. The enemies will use whatever is at their disposal to destroy the party be it status effects, ganging up on single characters or simply chaining area spells and abilities. Much of the frustration comes from this, as a single ambush round can lead to hours of game time lost. An example would be enemies that use area sleep attacks — these can kill the party very easily as the enemies are smart enough to only wake a single character at a time.

While exploring the Labyrinth the player will encounter three different types of monsters: random encounters, FOEs, and bosses. The latter two are visible on the map. FOEs are powerful monsters akin to mini-bosses that move around the map as the party does. For added challenge, a FOE can join battles in progress as a round in battle is equivalent to a square of movement. This adds a bit of unpredictability as the player may not be aware that such an enemy is in their vicinity before they get into the original battle. Trips to the Labyrinth end in one of three ways: the party leaves to replenish their health and stock of items, the party fills their bags with sixty items, or they simply perish.

Some bosses are centered on puzzles that may be very difficult for some players to figure out, as clues are not usually readily available within the game. For the most part, the game leaves the player alone to puzzle it out. When fighting the bosses, the player should expect to feel the bitter pain of defeat, as the bosses tend to be much more difficult than the FOEs and regular monsters in their Stratum.

The Labyrinth is explored from a first-person view. The unique part of the game is that the player must map the game out on the bottom screen on their own. It is required that the player do so as part of some missions and to survive the rigors of the Labyrinth. Each floor has a general look and thus it is very difficult to navigate by landmarks. This is a very fun aspect of the game, but it can get old and annoying about halfway through. But still, it can be a joy to keep meticulous maps to achieve total exploration and find all the secret areas.

A Stratum is a group of five floors and the regular quest sees the player visiting five of them. The party can enter and exit the Labyrinth at crystals found just within the entrance to the different Stratums. Each Stratum has a general look to them and when going to the next one the difficulty jumps. Each has their own boss that serves as the final challenge within that Stratum. Climbing to new floors also expands the number of quests available to the guild.

The quest for materials includes the boss monsters as well. As such, the player will be able to defeat previous bosses again to get their treasure. Both bosses and FOEs will respawn after a certain number of game days have passed. Time passes by wandering the Labyrinth or by sleeping at the inn. 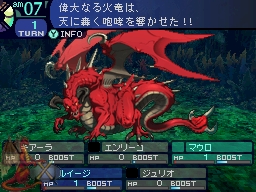 He awaits those brave enough to enter the sixth Stratum…

The graphics are simple and plain for the most part. The exploration animation is fluid, but otherwise unimpressive. The characters, monsters and explorable areas are all bright and colorful, but the lack of general animations is sorely missing. Some outside areas feature landmarks, such as waterfalls, that while pretty are not indicative of the power of the DS. Monsters tend to shake when attacking and not properly animate. Cutscenes are shown with colorful character portraits in front of uninteresting backdrops. A good portion of the character and monster designs are very well done. The sprites used are very attractive and some of the bosses are impressive. These would have been much more impressive had they been in 3D.

Similarly, the music fails to impress. While not bad, the music playing throughout each Stratum will get boring, as the average player will spend many hours wandering them. Similarly, the regular and boss battle themes also suffer from this. The sound effects are plain and there is no voice acting.

The menus in the game are easy to navigate, but there are some flaws that are just bothersome. Such simple things as using the shoulder buttons to toggle the character being looked at are missing. A good thing is that in battle the last actions are remembered and this can make the battles go much quicker.

Etrian Odyssey can be a very long game made much more so by the amount of time lost to repeated deaths. Upon completion of the main storyline, the player is presented with the opportunity to explore a sixth Stratum, containing enemies that make the final story boss seem like a weakling. This can add many more hours to the game, but is recommended for only the most die hard of fans.

In the end, this game has a very old school feel, in that it is very reminiscent of the games of generations past. This is at the core of its existence and it carries all the drawbacks and limitations that the games of the past have. But that is also where the charm lies — it is somewhat satisfying to play such a throwback to the past.

While this game is not very strong in terms of storyline, graphics, or music, it is sure to please those die hard fans that are just looking for a great challenge. The challenge is everywhere and completing Etrian Odyssey is a feat worth bragging about. Better games will come and go, but all in all, this is still a charming game full of nostalgia and will keep many players hooked on trying to overcome the latest impossible challenge.