Dungeons & Dam seems to have broken my oracular streak, as this review has made it into writing before anyone could announce an impending US release. It feels a little odd to be writing this at all, in fact — though not so odd as the game itself. Let us discuss.

Acquire has taken its fetish for dungeons in a new direction with this title. There’s exploration to be had, of course, and a good deal of combat, but Dun-Dam is far from being a normal dungeon-crawl experience. The player takes the role of Shion, who as the appointed commander of the defense forces spends most of his time on the sidelines looking through a crystal ball. As Shion, the player gets to view the nightly battles and can give only vague directives to the squads of fighters who do most of the work. Aside from the standard attack, defend in place, or run away, the player also has the power to call down watery doom on the enemy (and perhaps his own troops) by flooding the dungeon. This can only be done sparingly, since the water takes time to accumulate, and if the player chooses the wrong sets of upgrades then it doesn’t seem to actually do much to the enemy. In the end, it’s a lot cooler to watch than to use strategically.

The closest comparison for the battle system would be the original Ogre Battle, and as in that title, troop placement within a squad determines what each unit does in combat. Pre-battle preparations require some thought at times, as the game’s paradigm is definitely of the “wind it up and see what happens” variety. Each unit type brings different skills to the fray. Some units are best used for exploration, others for foraging or repair efforts. Some have very useful back row abilities, while others are useless in that position. There are two dungeon-related activities that can only be accessed with the appropriate units in-party, and some of the dungeons even inflict penalties of their own which have to be taken into account. In short, squad organization is a very important aspect of the game. 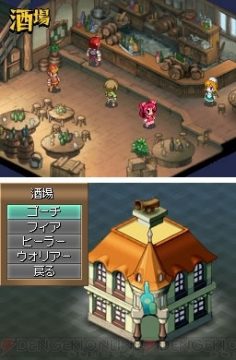 Chilling at the Pub

Dun-Dam gives plenty of options in terms of troops, at least. With nine basic classes and fifteen advanced classes, there’s a combination for any situation. The main problem lies in unlocking the various advanced classes, some of which come with very specific troop and building level requirements. The player should not expect to see everything that’s available on the first play through.

After one has made up some good teams for the current dungeon and taken out a few monster generators, the game’s challenge quickly plateaus. New dungeons always come with a big spike in difficulty, but by the end of the game a lot of the action becomes almost automated. More dungeon options would have been nice, as would the ability to send more than three squads into the dungeons on any given night. The game’s battle interface is handy enough, with the upper screen being used to show battles, and the lower screen for viewing the town or current dungeon. The two screens can be set to show activities in either area, allowing the player to easily keep track of what’s going on where.

Acquire has tried to balance the game’s “wait and see” approach to commanding troops by providing some decent music to listen to. The tracks don’t stray far from the realm of standard fantasy tunes, but they fit well with whatever the scene. For instance, the battle music increases and decreases in volume according to whether or not there are active skirmishes taking place. The voice acting tends towards the whiny, high-pitched, kiddy end of the voice spectrum, though the actual use of voices is sporadic outside the opening movie.

The story unfolds one scene at a time between nightly battles, and can get surprisingly deep as it explores the stresses put upon people living under siege. There’s anger, paranoia, romance, and a few instances of mob mentality for Shion to deal with. While the plot twists weren’t the most original in hindsight, the writing is solid throughout. Although Dun-Dam uses character portraits for dialogue, most of the action in the storyline scenes is done with the game’s regular sprites, which are surprisingly expressive for their size. A few major plot points, as well as the game’s opening video, make use of some nice animation, of a quality usually seen in TV series. Something of note is that the meat of the plot is often presented in narrative prose accompanied by bits of dialogue which makes some sections more like reading a novel than anything else. The combination works, but it gets a little wordy at times. 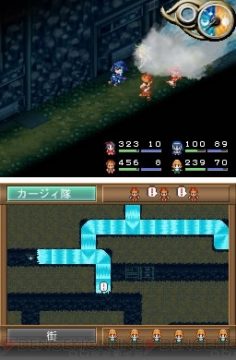 Caught up in the moment

While the player’s command options aren’t all that one might have wished for, overall the game offers a good variety of troop management and customization. The weapon creation system is straightforward but requires some effort, as all resources must be taken from enemies and then refined for use. There’s a weapon fusion system as well, wherein combining two of the same kind of weapon results in an improved version, often with a special attribute included. Combining two weapons of the same type and attribute results in a more powerful attribute, and these can often be very useful when trying to maximize troop potential.

On the subject of equipment, with the extra attribute names and numerical qualifiers, the names can get very long. If and when this is translated, this reviewer will be interested in seeing how the localizers deal with something like a +5 Obsidian Amulet of Heroic Sagacity.

While I can’t say that they did everything right in this title, Dun-Dam is a very original game, and provided me with solid entertainment for the better part of a month. The story stands as my favorite part of the game, along with the feeling of accomplishment when my troops were finally able to take down some of the nastier bosses in the game (and that took some doing…). I’ll definitely be replaying this later in the year, just to see if I can unlock some more of the character classes. Hopefully there will be word of its coming across the ocean before then.