We Aren’t Legion, They Are

Dungeon Siege III is an odd game. Developed by Obsidian Entertainment, based on a property created by Gas Powered Games, and published by the franchise’s new owner Square Enix, it’s a game with as diverse a background as they come. Impressively, this actually shines through in the game’s design, as despite its flaws, Dungeon Siege III has a surprisingly versatile set of features holding it together. One part hack ‘n’ slash, one part traditional WRPG, and with a dash of JRPG thrown in for good measure, it’s far more intriguing a game than its initial hours would suggest. That said, Dungeon Siege III is also an underachiever, rarely seeming to strive for more than simply “good enough.”

Taking place in the world of Ehb, Dungeon Siege III follows the last descendants of an autonomous military power known as the Legion, the majority of their clan wiped out in a purge led by the zealous Jeyne Kassynder. During an attempt to reunite the last descendants of the Legion, Jeyne’s forces attack anew. In the aftermath, the few that are able to gather set out to restore their brotherhood and put a stop to Jeyne’s forces.

While the story rarely manages to extend itself beyond generic fantasy trappings, it has its moments, and is certainly far more detailed than a typical hack ‘n’ slash game of its type. Unlike most class-based hack ‘n’ slash titles, each of Dungeon Siege III‘s four “classes” is a unique character, and while the player can choose any to play as at the beginning of the game, the other three appear later as companions. As the game progresses, interactive dialogue sequences appear regularly, and players can make decisions that will ultimately determine how things wind up at the end of the game. 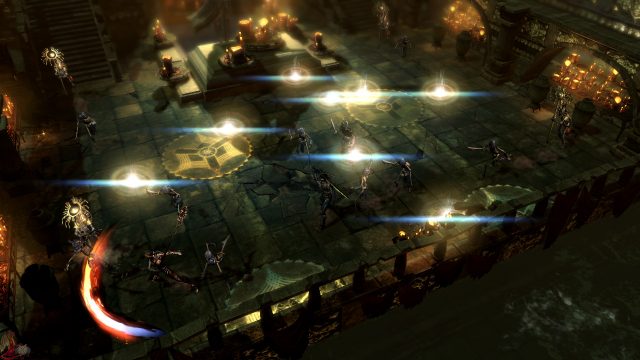 You against hordes of skeletons: everything a hack ‘n’ slash game needs!

Though surprisingly story-heavy for a game of its type, like all hack ‘n’ slash games, the main focus is battling hordes of foes, collecting scores of loot, and developing new abilities as characters level up. Dungeon Siege III provides an interesting approach to the hack ‘n’ slash formula that bears a startling resemblance to 2005’s Jade Empire. Each character has two stances that they can switch between at will, each of which has a different strength and weakness. Stances vary wildly between characters, and each stance has three special abilities that can be learned, bound to the X, Y, and B buttons respectively. Each character also has three special defensive abilities that can be activated in the same way, but while blocking.

Combat is fast-paced and exciting, but also surprisingly challenging at times. Enemies can hit quite hard, and it’s easy to get overwhelmed when surrounded. Effective use of skills, stances, and defensive abilities is key to any kind of success. Players can also choose one of their companions to accompany them, and they have full control over those characters’ equipment, skills, and upgrades. When either the player or his companion dies, the other can resurrect the fallen comrade by holding the RB button while standing over their corpse (AI allies do this automatically for the player.)

At the same time, Dungeon Siege III is disappointing due to the strict conditions placed over the player’s adventure, none of which make much sense. Why, when players are given full control over each character’s development and each appears in the game regardless, is control restricted entirely to the starting character? Why can’t one switch between them at will to mix things up? Similarly, though the game supports four-player online co-op, players are restricted to only one AI companion in the single-player game. If four characters fighting on-screen at the same time is possible, why then is the single-player campaign restricted as it is? The game could have been much more exciting, complex, and varied with these simple options in place, but for whatever reason, Dungeon Siege III goes without them. 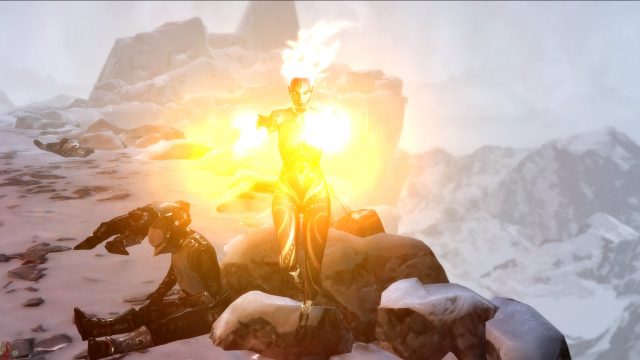 Character development is quite diverse, though not nearly as complex as some other, similar games. While each character receives nine skills total, they can enhance these skills with up to five proficiency points which are gained every level. Each skill has two options, and players will have to decide which skills to upgrade, and whether to upgrade them entirely in one way, or a mix of the two. Characters also gain a talent point each level that can be applied to a variety of passive abilities. Loot is mostly randomized, but there are many unique items that appear only in specific places. Interestingly, gear seems to be weighted so that items for the player character and companion are more likely to drop than for the inactive characters.

Dungeon Siege III‘s visual design is a mixed bag. Though the art design manages to be varied and fairly detailed in places, the game’s camera prevents much detail from being seen in character and enemy models. During dialogue sequences, more details become visible, but the characters are disappointingly static. Instead of the animated sequences seen in modern games like Dragon Age, characters simply stand around talking, arms at their sides.

The audio is equally mixed. The soundtrack is mostly forgettable, throwaway fantasy tunes, and the voice acting ranges from terrific to awkward. All the main characters are excellent with the exception of Anjali, whose voice actress sounds flat and emotionless. Unfortunately, most of the dialogue they get to speak is quite bland, though Reinhart and the other inhabitants of Stonebridge are all exceedingly entertaining.

Overall, Dungeon Siege III is a solid dungeon crawler that does many things right, but never really manages to set itself apart from the hundreds of other fantasy RPGs out there. The game is quite short, offering less than fifteen hours for a single playthrough, which makes it difficult to justify its high price tag. For those seeking a good hack ‘n’ slash experience that doesn’t skimp on story, Dungeon Siege III is a good bet, just don’t be expecting anything amazing.