Square Enix has announced that the international version of free-to-play mobile title Star Ocean: Anamnesis will be shutting down on November 5, 2019. In-app purchases have been suspended, while Gems already purchased will be usable until service ends. Players can also continue to play the game and obtain characters and participate in multiplayer co-op battles.

Star Ocean: Anamnesis was released for iOS and Android internationally in 2018 following its Japanese launch in 2016 and is set two years after the events of Star Ocean: Integrity and Faithlessness, with players controlling the captain of Federation starship GFSS-3214F. A pirate attack results in the captain and robot AI named Coro being teleported to a desert planet. There they come across a woman named Evelysse, who escapes from a monster using her special magic that summons heroes from elsewhere in time and space (i.e. various characters of other Star Ocean games). The player and Evelysse team up to begin the long journey back to Earth. 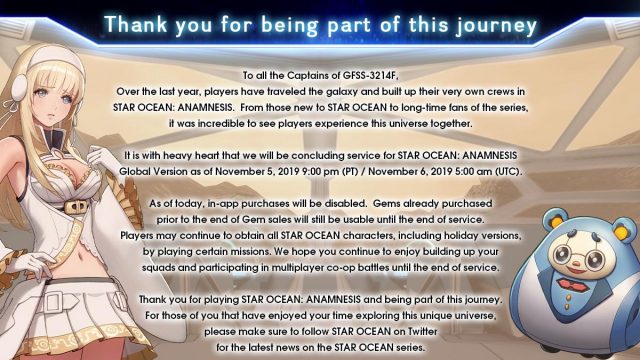