How Low Can You Go?

Dungeon crawling games are nothing new. Many games feel that the tried and true method has been done enough. These games try and mix in anything from arousing companions to simulation elements. Most games have random dungeon creation engines to handle all of the design elements for the hero, though a few still hand the explorer pre-designed dungeons.

Dungeon Maker: Hunting Ground does neither of these, specifically, but has its own twist. Ever wondered what those designers were thinking when they made that dungeon you hated? As this game’s name suggests, now it’s your turn. The layout of the dungeon is entirely created by the player. Each day, our sole hero will explore the dungeon he has created, and expand on it as he wishes. Each night, new monsters will move into the dungeon, based on how much they like the accommodations. The state of the rooms and corridors, as well as the complexity of the maze itself help decide what monsters take up residence in the dungeon. Each floor has a rating and the higher the rating, the better the monsters, and thus better loot. The higher floors have influence on the potential for the lower floors, so it’s not wise to strip them for materials to help expand lower floors.

What’s the point? Early on, the hero seems only slightly better off than an obsessed man trying to whittle away his life slaying monsters to gather their loot to sell for the sheer purpose of expanding his dungeon. The townsfolk ask for little things now and then, but they generally leave the man be. As the dungeon becomes more impressive, the people start recognizing the potential of the dungeon. In turn, they reveal secret wishes to ensnare specific monsters that have been troubling them. If the hero succeeds in entrapping and defeating the monster, the person in town rewards them with anything from money to a key building piece. Some of these quests merit the hero a stair kit, which allows him to add another floor to his dungeon. They are rarely sold in the shop, so this is the only way to progress in the game. Eventually, the town hopes the dungeon will draw the attention of the Wandering Demon who has been a plague on the town for years. 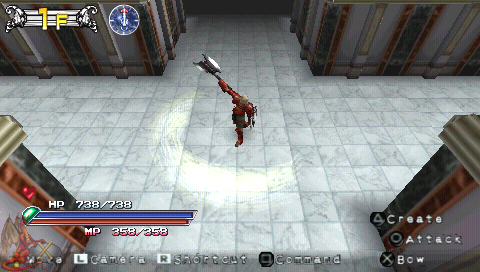 Our hero will slay countless monsters on his journey into his own dungeon, but they do not give experience points. In order to become stronger, the hero takes edible pieces of the monsters back to town, where he can learn new ways to prepare them. Each dish enhances specific stats, but the hero can only eat one of these meals per day. As the ingredients become harder to find, the stat increases become greater. It is yet another incentive for building the most complex dungeon possible.

The battles in the dungeon are hack’n’slash style. As the hero explores each day, monsters will appear from nothingness and attack him. In order not to be overwhelmed, since most monsters attack in a group, the hero slashes in an arc, protecting most of the direction he’s facing. Almost all of the attacks knock the enemies back as well. This allows the hero time to recover and swing again. Each weapon type has its own combination of three attacks, and a special attack can be used in place of a normal swing for a different effect, but overall, it’s a fairly simple system. Magic is a little more difficult to use, since casting takes a little time, and the hero is vulnerable during this. The right spell in the right place can be a huge asset, however, especially when trying to take down the bosses.

Death in the dungeon is forgiving. The only thing that is truly lost upon death is time. When the hero falls, he wakes up in town with all items and gold preserved. He may not re-enter the dungeon that day, but all that has been accomplished stays intact. This is quite necessary, since there is no visual or audible warning at all of low health. It’s easy to lose track of the HP bar in a tough battle, so it’s gracious of the developers to at least make the death penalty relatively light. Even so, the lack of any warning whatsoever is not exactly forgivable. 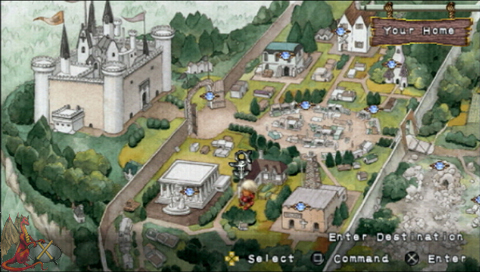 This town is worth protecting?

While exploring the dungeon, the music has two main themes: Battle and Other. In battle, an up-tempo, almost rock’n’roll style theme electrifies the scene. After a set time without monsters, the music abruptly changes to a soft, mellow theme that is better suited for one of exploration and design. When the hero find new monsters, the music switches back to the battle music the second that monsters appear. At first, it sounds like the music is the same throughout the dungeon, but by paying careful attention; each floor has a slight variance to the two main themes. Over many floors, the difference keeps the music fresh without creating a feeling like each floor is its own separate dungeon.

The true charm of the game comes in town. All of the townsfolk have a distinct personality as unique as the artwork that depicts them. The hero is as dense as lead when it comes to interacting with them, however. He’s even offered a date at some point, but not wanting to be distracted from his dungeon even for a night with a fine-looking woman, he refuses. A lot more fleshing out of the characters could have been done, but instead it leaves the conversation of each to a single purpose.

Dungeon Maker: Hunting Ground tries something new, bringing another game mixing two unique gaming styles in an attempt to create a new experience. One aspect of the game flourishes with the creation and design elements of the dungeon, while the story is left feeling flat and uninteresting. Because of this, it’s hardly an engrossing game. Fortunately, most dungeon crawlers have never been about the story, but instead about the conquest of a new dungeon. Conquest of a dungeon you have to create first is an interesting experience. Pounding through the game in the shortest time possible is unrewarding, and even taxing as dungeon designs become little more than filling in holes. Taking the game in bits and pieces over time can be quite rewarding, especially for those who aspirations for architecture and drawing out plans for dungeons ahead of time. In the end, it’s a nice way to spend some free time, but the only thing that will bring you back time and again is your own ambition.