The Dragon Quest Monsters series is a long running spin-off that has been around since the original Game Boy. Being that this is the second Monsters title on the Nintendo DS, I found myself going into Dragon Quest Monsters: Joker 2 expecting merely a slightly updated version of the original with maybe a few tweaks and a new story. Instead, I got a streamlined, more polished game with a fantastic monster collection system. Those who had issues with the original Joker but found the concept appealing should check this out, as it is highly improved, very accessible, and extremely addictive.

In Joker 2, the story is almost non-existent, but for a game where story is not a key component, it serves its purpose well enough. It starts with a wannabe monster scout hiding out in a ship on the way to the major monster scout tournament. Before too long, the ship crashes onto an island, and the stowaway ends up as the survivors’ only hope for salvation. So even though that’s about as deep as the story gets, it doesn’t really matter, as the gameplay is what really keeps this title afloat.

In terms of combat, Joker 2 is a fairly straightforward monster collecting game. Players will scout monsters to do battle with them, with the player character only taking a support role in combat. There are hundreds of unique monsters that can be scouted throughout the game, ranging from a simple slime to a giant five-headed dragon. The variety is fantastic, even for those looking to focus their collection only on one type of monster. For example, there are over forty different types of slimes alone, so creating the ultimate slime-only brigade is completely possible. The sheer number of unique and interesting monster types brings an appeal to those that might not normally enjoy catching and breeding monsters in other similar games. 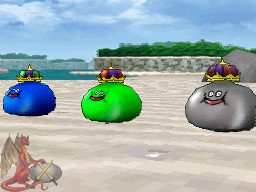 Slimes are a ton of fun.

Monsters vary in rank, so as the game progresses, newer monsters become available. Scouting and leveling new monsters will be a constant task here, so don’t go into this game expecting anything less. There is also a synthesis system for the creation of new creatures. This system has a few issues, but works fairly well. In order to join two monsters into a new creature, both must be level ten or higher. One minor frustration comes in the fact that each specific monster has a charge associated with it: positive, negative, or neutral. This acts as a gender component, as two positive creatures cannot be synthesized as the charges must be opposite. Early on, this can cause a bit of annoyance in trying to breed a specific monster, but is not as problematic once more creatures become available for scouting. Also, once a monster is bred with another, it is gone for good, so creating another one means starting over from scratch. These are really just nitpicky issues for early on in the game, though it would have been nice had these been addressed.

When two monsters fuse, a total of three sets of skills from the parents can be passed on. This means there is a lot of variety in creature creation, and those who wouldn’t normally have a skill when scouted now will, with just a little effort. Newly created monsters start at level one, but thankfully the game is designed so that leveling these creatures does not take a ton of time. While only three monsters are available in the main combat party, an additional trio can be kept in standby and will receive a reduced amount of experience just for being on backup duty. These monsters can also be swapped in and out of combat between rounds, so bringing in a weaker monster for the final round can net them a quick boost of experience. It makes creating new monsters a relatively hassle free experience.

Anyone familiar with Dragon Quest combat will be instantly at home with Joker 2‘s battle system. Players select their attacks at the beginning of a round and then participate in a back and forth with the opposing side. Monsters have a lot of variety in terms of gameplay, so it’s very easy to create a fully offensive team or to focus more on the buffing and debuffing side of things. Monsters can be set to follow one of four different AI settings or they can be controlled directly, at least in most standard battles. One annoyance is in tournament battles, as monsters cannot be swapped out and can only use their AI settings. This is a minor frustration, as the vast majority of battles are fully controllable. Occasionally these tournament battles are required in order to progress in the game, so they serve as a litmus test for the current party. If players cannot win these battles with AI, they are not likely ready for the next area. 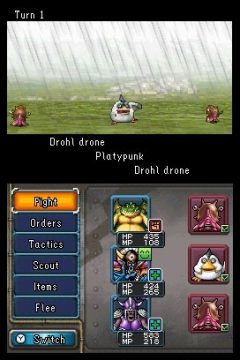 You can grind against easy monsters until you’re this high level, but it will take a while.

Taking another page from the standard Dragon Quest playbook is the fact that there are no real game overs in Joker 2. If the main party is defeated, the backups will be instantly shuffled in. If both sets lose, then the player is sent back to the airship with half gold. Thankfully, players can save anywhere on the map, so there is no required backtracking to the ship (normally a church) simply to save, and it’s easy enough to restart if a major problem occurs.

Also helpful is an ATM on the ship where players can safely store all their money to mitigate any loss. Navigating around the island is also made simpler by having quick teleport options such as Zoom, which takes players instantly from one area to another, and Zip, which will transport the player to a shortcut deeper within an area once that portal has been found. Unlike other Dragon Quest titles, Zoom can even be used in indoor areas. Joker 2 takes all of the time-saving features from the Dragon Quest series and makes the best use of them here, making this a very user-friendly game.

The post-game content is very robust. It offers a ton of new monsters and additional content well suited for those looking to create the most powerful team around. However, those looking to enjoy the same brisk pace as the main storyline will find it is much more work in post-game. The main game content is fantastic enough on its own and offers a satisfying experience without leaving gamers with the feeling that they need to delve into the additional content to fully enjoy the game.

While I initially questioned Nintendo of America’s decision to localize this game based on my experience with the first one, I now see why the decision was made. Dragon Quest Monsters: Joker 2 is great, not just for fans of catch-em-all games, but also for anyone enamored with the Dragon Quest series. This game blends those two worlds in a way that appeals to either side. It might be difficult to look at Joker 2 and not proclaim it as simply Pokémon with Dragon Quest characters, but it is a much more streamlined game and very visually appealing. This bright and cheery game is a wonderful addition to the DS library, so while I might have initially balked at its localization, I’m very glad it made it.