Only a Few Chapters Should Be Chosen

Dragon Quest IV: Chapters of the Chosen has finally arrived for the Nintendo DS. Though Enix had planned to localize the PlayStation remake of the original NES title in 2002, developer Heartbeat took an ill-timed sabbatical and the North American version never came to fruition. Fast forward to 2008, in which Square Enix loves remakes and loves the DS and has thus decided to bring the entire “Zenithian trilogy” of Dragon Quest IV, V, and VI to Nintendo’s handheld. While this first iteration shares the visual style and additional content of the Japanese-only PlayStation remake, it also boasts a fresh translation, minor content upgrades, and fantastic use of the dual screens. And while the game retains its powerful and unique chapter set-up, the game sadly becomes incredibly disjointed closer to the end before taking a sharp turn downwards and never returning.

First things first, Dragon Quest IV is a joy to look at on the DS. Retaining a classic look suits the old-school gameplay well and it never feels like it’s trying too hard like the Final Fantasy III and IV remakes. However, choices were made to make sure this nostalgic look doesn’t feel lazy. While exploring towns or dungeons, the environments take up both screens with no HUD and the result is impressive. On top of that, in most of these locations, the player has the ability to rotate the view 360 degrees using the L and R triggers. Not only does this allow for more comprehensive exploring, but it can be occasionally breath-taking on Nintendo’s little machine. Whenever there is a castle on screen, RPGamers are sure to just let their characters stand still while they rotate the camera purely for the spectacle. The visual prowess doesn’t end there, either. In battle, the background environments are attractive and animated (although a bit bare), and enemies may look simple, but their attack animations are fluid, interesting, and full of character. Add that to the subtle camera tilts and pans in battle and it’s easy to forget that it is still an extremely old, first person battle viewpoint. Dragon Quest IV for the DS may not be the title to push the hardware the hardest, but it is a game that recognizes its roots and the platform on which it is performing, and visually executes that knowledge to the fullest. 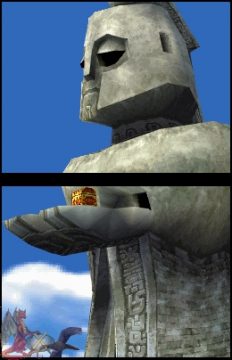 Rotate this to be impressed!

Square Enix didn’t get everything right on the technical side of things, unfortunately. While the visuals reflect a perfect blend of old and new, the same can’t always be said for the music and sound. Don’t be deceived, however! The music in the game remains excellent from a composition standpoint and sounds as good as it can on the mediocre DS speakers. The problem lies in that every time a battle occurs in the world map or a dungeon, the music resets. This was a technical limitation for the original, not a feature, and therefore there is no reason for it to still be the case in the DS version. There are some well constructed tracks that don’t hit their stride for at least a minute or two, and unless the player chooses to put her DS down and just listen to the full track, it is highly unlikely that she will hear even half of the many excellent tunes.

Following suit in the realm of annoying, easily avoidable design choices come the menu and save options. As should be the case with every portable RPG, there is a quicksave option, but it is deceptive. For it is less of a quicksave option and more of a secret fourth save slot. It may only be used on the world map (or else the game just suggests putting the DS to sleep), and while it forces the player to turn off her DS after saving, she can actually access the same “quicksave” file as often as she likes until she uses the feature to save again. This provides more confusion than convenience and ends up feeling like a perplexing and uninformed design choice. The menus don’t suffer from exactly the same problem. They don’t have the “perplexing and uninformed” illness, but rather have been stricken with a severe bout of the “redundant and poorly laid out” virus. The A button in regular play is intuitively context sensitive. It is used to talk to NPCs, and to search the ground for secret items if the players notices a suspicious spot. But for some unexplainable reason, the main menu takes up two of its six slots for “talk” and “examine” options. Who would press two extra buttons to perform the same action? Nobody! To make matters worse, far more important options like “equip” are hidden away in the “miscellaneous” menu. It feels like the first draft of the layout when this was the third chance to get it right. Luckily, there is the option to auto-equip new weapons and armor in the shops, and the top screen handily provides the appropriate statistics. So the questionable menu layout never becomes a truly major issue. Finally, to wrap up the list of things about Dragon Quest that are more archaic than endearing and need to be changed immediately comes the inability to check the experience required to level up at any location except the church. Minor to some, perhaps, but for statistic and menu-driven RPGs like the Dragon Quest series, there is absolutely no reason for it.

The final issue is the absolute exclusion of the touch screen. While some players prefer the buttons, the DS has been out for too many years with too many great software titles making use of the touch screen to refuse the option altogether. It doesn’t work to press the ironically thumb-sized menu buttons. It doesn’t work to scroll through text. The touch screen is the loser kid in the corner of the Dragon Quest remake party, which is too bad because the other kids don’t realize what a cool guy he could be if they just gave him a chance.

Although summoning long explanations, a lot of these issues are relatively minor, and the game plays quite well in spite of them. Navagating the world is easy, and the simple battle system loads quickly and provides an ample amount of old-school fun. 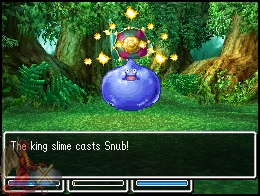 It’s a hint to snub the last chapters.

This fun is further magnified in the first 15 hours or so when Dragon Quest IV employs an extremely unique and especially captivating story telling style. Like the subtitle suggests, the game is split into chapters and most of them focus on a specific character or a small set of characters. Each time the player begins a new chapter, she is introduced to a new section of the world with new people to meet. Her characters also always begin at level 1. Great attention is paid to giving personality to each world-within-a-world, and so it never becomes tiresome to build each character up from scratch. In fact, quite the contrary. Really creative and clever gameplay quirks keep the experience fresh and exciting, and it is truly impressive. More games should take a cue from how Dragon Quest IV treats its first chapters and how every character is given meaning in her own context. It breathes depth into the world similar to how Final Fantasy IX took care to look at minor characters. It’s a hightly effective technique for RPGs, and this remake further proves that point.

Unfortunately, Chapters of the Chosen chooses to throw its excellent storytelling choices out the window in the final chapters. Once the characters start to gather and the stories intertwine, the focus is immediately shifted from the people the player has spent the better part of the game getting to know onto some boring villain with no emotional ties. In fact, the final chapter in the main story feels like an entirely different game, and it is to the title’s detriment. Instead of continuing the refreshingly continuous gameplay and character hooks, the game gives the player access to everything, essentially stops telling a story, and expects her to figure it out and to still care. While open-ended gameplay can be very inticing, there is no transition from the hand-holding of the earlier chapters and the juxtaposition is off-putting.

It is the characters that make a plot interesting and turn it into a story. Dragon Quest IV initially does a great job of recognizing that, so it is truly disappointing to see the focus shift from character to plot, thus ruining a story that started off so well.

When all is said and done, Dragon Quest IV: Chapters of the Chosen is still an endearing title that is well suited to Nintendo’s dual-screened wonder. It brings high hopes for the rest of the Zenithian trilogy and even higher hopes for the entirely new Dragon Quest IX arriving on the same platform. For a fantastic first half and a visual treat, players should pick up this title while expecting to be greatly let down by a weak second half and some baffling design choices.